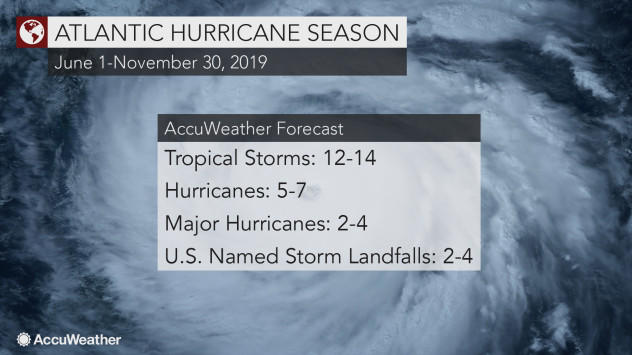 Caption
A forceast of the tropical storms and hurricanes documented during the ongoing 2019 Atlantic hurricane season.

The month of September may mean the end of summer, but it's only the midway point for meteorologists tracing the latest hurricane developments of 2019. Just after mid month, we're up to 10 named storms this season.

One of the most powerful and destructive forms of nature, hurricanes are no stranger to the coast of Georgia.

Dorian was the first major hurricane of the season — which runs June 1 through Nov. 30 each year. Dorian reached Category 5 and made landfall in the Bahamas.

Dating back to 1950, more than 100 hurricanes have made landfall in the continental United States during the summer and fall months of the season.

In the end, Dorian caused many coastal residents to evacuate, but only skirted the coast of Georgia and left minimum damage to properties.

Hurricane Humberto was edging toward the shore of Bermuda Wednesday night. Researchers believe that it is expected to bring coastal flooding and high winds to the island.

The newest storm, Tropical Storm Jerry, became a hurricane by 11 a.m. Thursday, according to the National Hurricane Center.

Meteorologists forecast 12 to 14 systems of hurricanes and tropical storms for the Atlantic basin, according AccuWeather, a media company that provides worldwide weather broadcasting services. About 5 to 7 named systems are predicted to become hurricanes. Of those, up to four could become major hurricanes.