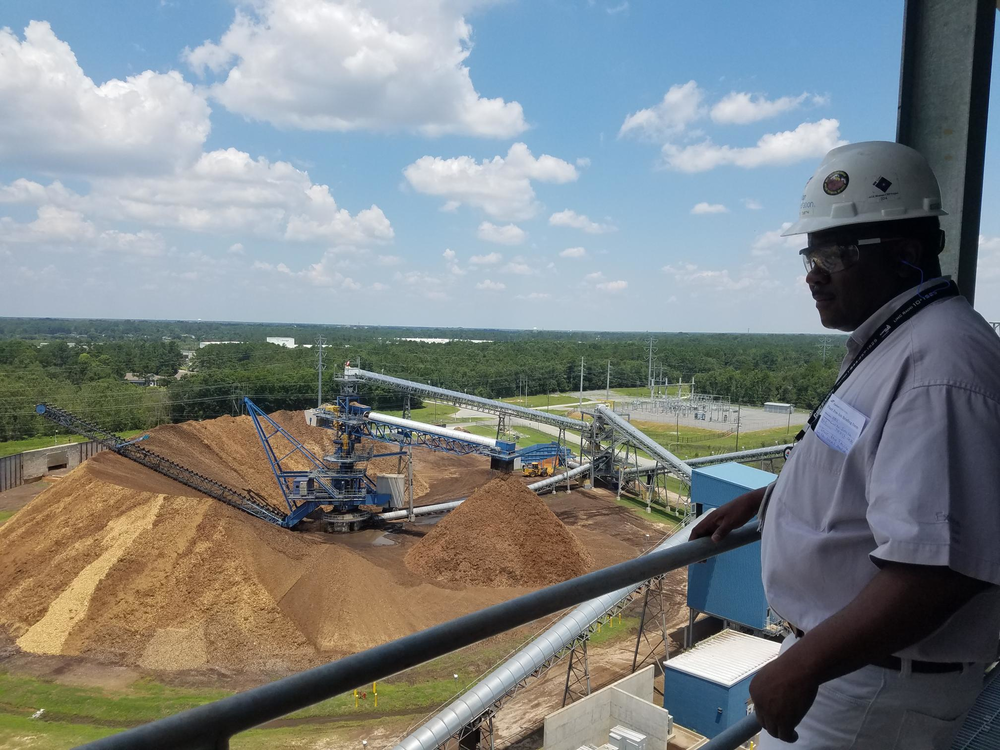 Albany Green Energy Maintenance Manager Curtis Smith looks out over the pile of chipped-up wood, known as biomass, that the plant will burn to make electricity. / GPB News

If there’s one thing Georgia has a ton of — actually a billion tons — it’s trees. The state leads the country in acres of private timberland and volume of timber harvested. Some in the timber industry think we should turn more of that wood into electricity. Georgia's timber industry is pushing for more biomass energy, but some argue it's not the best solution.

From several stories up at Exelon’s Albany Green Energy plant, you can see a massive pile of chipped up wood, known as biomass. A long conveyor carries it up into the plant, where it’s fed into a boiler.

The biomass burns to make electricity for Georgia Power. Around the corner from the wood pile, a long tube snakes off, carrying leftover steam to power a Proctor and Gamble plant.

From the top of the power plant, you can also see trees: miles and miles of forest in every direction.

But, “we’re not just going out and grabbing a tree, being able to use that tree,” said plant manager James Luckey. “Most of our fuel is coming from treetops, and mill residuals that come from paper mills or something like that.”

They burn the stuff that can’t be made into lumber or paper products. Advocates in the timber industry say there’s plenty of wood waste like that in Georgia that could be made into power.

Johnny Bembry owns a tree farm in Pulaski County. He ends up with waste when he thins his trees to prevent fires and disease.

“That waste from the thinning, it’s going to have to be burned,” Bembry said. “It’s either going to be burned in the woods and wasted, and release carbon in that manner, or it could be burned for energy creation.”

The Georgia Forestry Association, an industry group, is calling for more power plants around the state that burn biomass. They say it’s a good use for leftover wood, cleaner than coal, and renewable because you can keep growing trees.

But Weeks points out a key hole in that calculation: it takes time for the trees to grow back. Researchers say it actually takes about 11 years for a new tree to replace one that was cut.

“Whether or not that’s a problem depends on how threatened you think we are by climate change,” said Marilyn Brown, Regents’ Professor and Brook Byers Professor of Sustainable Systems at Georgia Tech’s School of Public Policy. She has studied biomass and directs the school’s Climate and Energy Policy Laboratory.

“I am personally feeling very threatened,” she said.

We may not have 11 years to wait for trees to grow back. Last year, the Intergovernmental Panel on Climate Change called for “rapid and far-reaching” changes to reduce carbon emissions by 2030 to get climate change under control.

“You can’t grow a lot of trees between now and then if we rely on biomass plants to large scale over the next decade,” Brown said.

But on a small scale, it might make sense. Ultimately, Brown calls biomass an “intermediate” energy source: not the cheapest or the cleanest, but viable as one piece of a system that has lots of energy sources.

That’s what the timber industry is calling for: small plants, scattered around the state.

“We’re talking about a few grains of sand on the beach, really, at the end of the day,” said Georgia Forestry Association President and CEO Andres Villegas.

The key will be finding a balance that gets the most out of Georgia’s trees and still keeps the state’s forests growing and soaking up carbon.