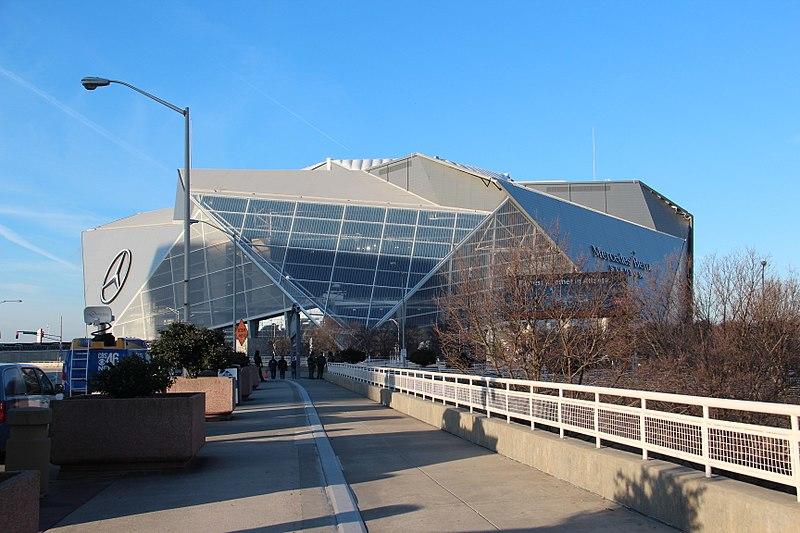 The Los Angeles Rams and New England Patriots face off Sunday in the Super Bowl at Mercedes-Benz stadium.

The Falcons are not playing in Sunday's Super Bowl, but you will see Atlanta and Georgia represented in the big game.

GPB's Rickey Bevington sits down with GPB Sports' Jon Nelson ahead of Super Bowl 53 to speak about the number of Georgians playing in the big game.

But what about the actual football game? Here to tell us what to look for and who to look for is GPB Sports' Jon Nelson.

Rickey Bevington: So, how many Georgia players either from college or high school are on the roster for the Los Angeles Rams and New England Patriots?

With the Patriots, you're talking about David Andrews, who is the center and, for the last three years, has snapped the ball to Tom Brady. He went to Wesleyan and was one of the offensive captains with the University of Georgia.

Another offensive lineman, Trent Brown, went to Georgia Military. You've got Ulrick John who went to Bradwell Institute. Down on the coast, there's a couple of draft picks. You've got Sony Michel who went to University of Georgia.

You have the rivalry there with running backs with the colleges, with Sony Michel and Todd Gurley from University of Georgia. Gerald Everett was a tight end at Columbia High School. Ramik Wilson was a linebacker at UGA.

The kicker is Sean McVay, the head coach of the Los Angeles Rams, who was quarterback at the Marist School fourteen, fifteen years ago. It was one of the coldest championship games I've ever covered. To see him go from quarterbacking in high school to being head coach at the age of 33 has been amazing, and his memory is photographic.

Bevington: So does Georgia send more players to the NFL per capita than other states?

Nelson: I would say per capita, yeah ... Jeff Fisher from High School Football America does an algorithm every year. For the first time in the history of his algorithm, Georgia has the number three ranked high school football talent that goes to the next level.

Obviously, there's Texas and California, but they have a lot more schools and a lot more kids, but I think, per capita, I think yes, the answer is Georgia and to see all these numbers playing at home is really cool.

Bevington: So let's talk about Georgia's high school football culture and system. This is really where the NFL starts. It's where the talent starts to be really worked on and worked up. How did it become so strong?

Nelson: I think a lot of it has to do with history. You get into the communities themselves and how like a Valdosta or a Moultrie or a Brunswick or a Macon or a Warner Robbins invests in their kids, and you have all of this history that's associated with all of these schools that go back into the early nineties.

You could be talking about a Fitzgerald who's cleared 100 years, and how these towns wrap themselves into their communities and into their kids.

When we have the high school championships on GPB, and you see it at Mercedes-Benz stadium. How basically the entire county of Colquitt and the entire town of Moultrie shows up for a championship game. I think that's a microcosm for all that success.

Bevington: But, while we're investing in kids here in Georgia, we're also having a bigger conversation about how to protect them. We're talking at a professional, college and high school level about the effects of injuries and concussions on young players. What changes are you seeing?

Nelson: I think USA football really, for me, has some of the biggest things like their safe tackling initiative and what they are investing in is trying to get the proper fundamentals.

You'll see Pete Carroll with the Seattle Seahawks do what they refer to as "roll tackling" and instead of leading with your head and going in to make a tackle, what you're doing is going in from the side.

You're coming in with your shoulder. You're grabbing an athlete, and you're spinning him to the ground, so you're avoiding that direct contact with head-to-helmet and head-to-shoulder pads. Those kinds of fundamental things from USA Football come up strong.

Bevington: Let's talk about the Falcons. They have to watch a team that beat them so hard in the Super Bowl two years ago play on their home turf. What do the Falcons players do during the game?

Look at it this way, at least it wasn't the Saints. If the Saints had beaten the Rams, and it be the Saints and the Patriots. Think about what that would be: critical mass at Mercedes-Benz.

Bevington: And all Atlantans would have left town already.

Bevington: So another elephant in the room is that the Falcons owner, Arthur Blank, and Patriots owner, Bob Kraft, are going to be in Blank's stadium. For those of us watching at home, are we going to be seeing tension?

Nelson: I don't know if there's necessarily going to be tension, but I think that Bob Kraft will probably be paying attention to his team, and Arthur will be wanting to be the good host. I think, your number of cutaways per owner, I think you set that number to about two and a half.

Nelson: He'll be a fantastic host. Don't get me wrong, but you know that Bob Kraft is going to be wanting to get another Super Bowl ring and chase however many that he'll need to fill up two hands worth.

Bevington: So kicker, here, Jon, how are the Falcons chances for next year?

The Los Angeles Rams and New England Patriots face off Sunday at 6:30 p.m in the Super Bowl at Mercedes-Benz stadium.