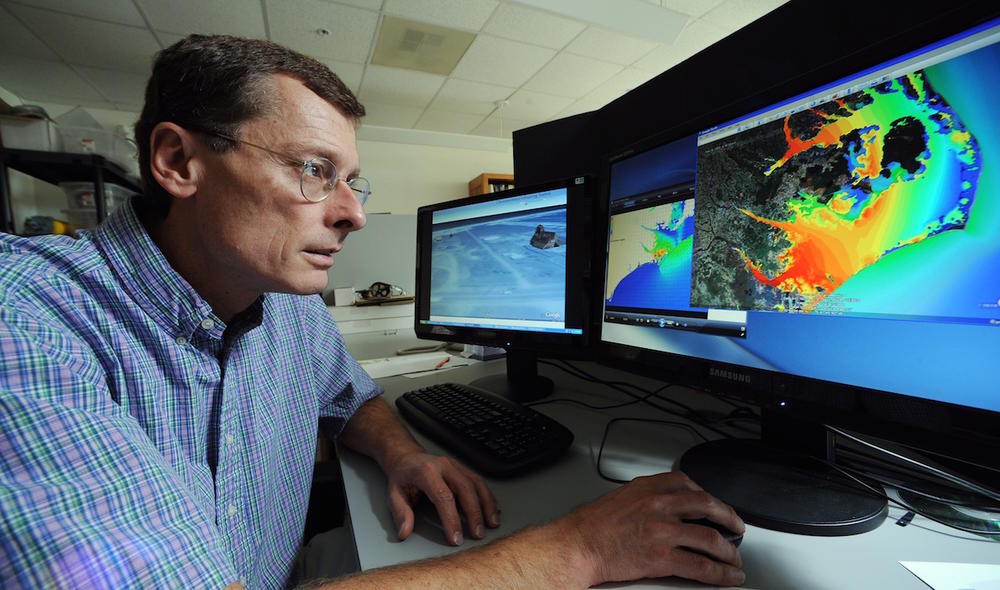 Dr. Rick Leuttich, director of Marine Sciences at the University of North Carolina Chapel Hill, is an expert in storm surge.

Water was on the minds of many Coastal Georgians today. Some scrambled to buy a few extra gallons of it when some grocery stores opened for a few hours. Others piled sandbags or whatever they could find to try to prevent water from flooding their homes.

At high tide, the water level in the marshes was already noticeably higher than usual. The moon’s cycle already meant water levels would be elevated right now. That isn’t great news, with Irma on the way and with the coast expected to get flooding from storm surge.

Dr. Rick Leuttich is director of Marine Sciences at the University of North Carolina Chapel Hill, and he’s an expert in storm surge.

“Simply stated, storm surge is water that’s pushed by the wind up onto land,” he explained. “A hurricane, because the winds are circular, they’re counter-clockwise around the eye of the storm. In this particular case the winds start out by blowing offshore, so they blow the water away from the shore as the storm approaches. Then, as the eye gets there, it calms. And then as the eye passes, the backside of the storm now has winds blowing toward the shore. That’s when you’re going to get your storm surge.”

Leuttich said it’s the opposite of what Georgia’s coast experienced with Hurricane Matthew.

“This is a really big storm so the winds actually do extend all the way over to your side,” he continued. “The winds will start out blowing on shore from east to west, toward you and then as the storm pulls away, they’ll turn around. Now the winds that you experience on the east coast of Florida and in Georgia coast won’t be as strong as those the west coast of Florida is experiencing, but they will be significant. And so I think you can expect the sort of thing that happened with Matthew  – maybe 18 to 24 hours before the eye actually reaches you, you’ll have strong winds.”

“They’ll be blowing some storm surge in your direction,” Leuttich predicted. “I would think three to five feet is probably good to plan on. You’ll have waves, you’ll have beach erosion. Areas that are traditionally low and maybe get flooded on king tides or coastal storms are likely to flood in this case. And so people need to be prepared for that.”

He echoed what FEMA officials have said: that water is the most dangerous element in hurricanes. “It kills the most people during these storms and it takes the longest to recover from in severe cases,” he said. “So it’s really what we should be focusing on in terms of its impact.”

That’s the message emergency officials have been sending for days: that though the strongest part of the storm will miss us, there is still reason to take every precaution.

In the meantime, they expect the wind to kick up to tropical storm force by midnight Sunday tonight and last through Monday afternoon. So that’s 12 to 15 hours with sustained winds of 39 mph or higher. That will certainly kick up waves too and that could cause some flooding out on Tybee Island and on all of Georgia’s beaches.