'It Takes Up The Whole River!' US Ports Welcome Giant Ship 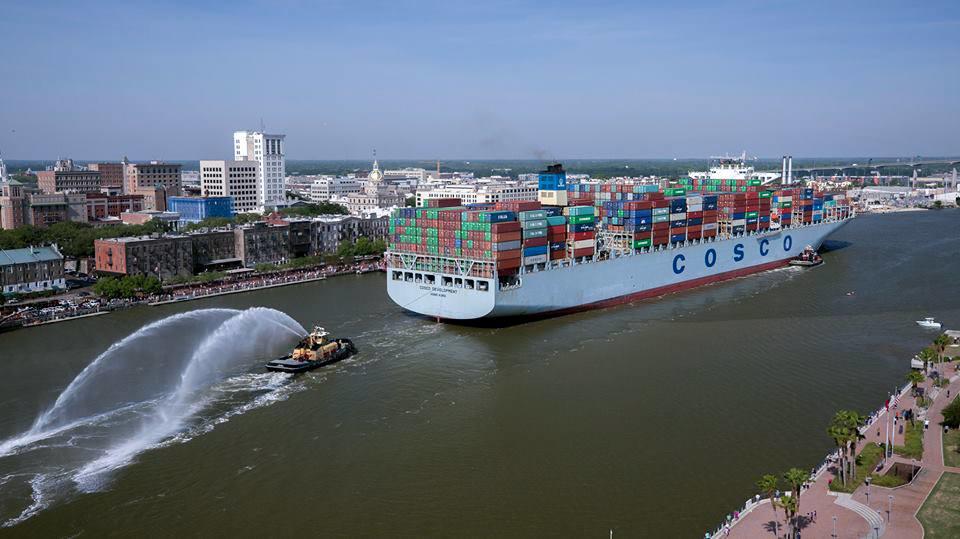 Caption
The container ship COSCO Development sails up river past the historic district of Savannah, Ga., to the Port of Savannah, on Thursday, May 11, 2017. At 1,201 feet long and 158 feet wide, the ship is the largest vessel ever to call on the U.S. East Coast.

The largest cargo ship ever to visit ports on the U.S. East Coast is so long the Statue of Liberty and Washington Monument could fit end-to-end along its deck and still leave room for Big Ben.

The COSCO Development arrived Thursday at the Port of Savannah after cruising past dozens of onlookers who cheered and took photos of the mammoth vessel from Savannah's downtown riverfront. Its first East Coast voyage marks a new era for U.S. ports that, despite years spent anticipating the supersized ships, will struggle to accommodate them without major infrastructure improvements.

"It takes up the whole river!" Andrew Evans, who served as a ship's officer in the 1960s, exclaimed to his wife as the ship slowly lumbered into view, the cargo containers stacked on its deck towering above trees on the shore.

"The largest ships I was on, you could fit 10 of them on that ship," Evans said. "Maybe more."

The big ship, flagged out of Hong Kong and owned by China-based COSCO Shipping Lines, is also the largest to pass through the Panama Canal following a major expansion last year. Its arrival on the East Coast shows shippers aren't waiting for the seaports scrambling to deepen their harbors so the larger ships can pass fully loaded at low tide.

The Port of Virginia, where the ship docked earlier this week, is one of only four East Coast ports with the desired 50 feet of depth at low tide. A $973 million deepening of Savannah's shipping channel started in 2015 but won't be finished for about five more years. The Port of Charleston, South Carolina, where the big ship will head next before returning to Hong Kong, plans to start its own dredging this fall.

Overall, 15 U.S. seaports on the East and Gulf coasts are seeking $4.6 billion after being authorized by Congress to make room for bigger ships. Only three of those have cleared the permit requirements needed to start digging, said Jim Walker, navigation policy director for the American Association of Port Authorities.

Meanwhile, the largest ships using the Panama Canal must carry lighter loads or wait for higher tides before calling on most U.S. ports on the East Coast.

"Maybe it's a warning shot that these U.S. ports need to get these improvements finished," Walker said. "If you're having to light-load ships for this, it costs more."

Manuel Benitez, the Panama Canal Authority's deputy administrator, said the surge in ship traffic between the U.S. East Coast and Asia has exceeded expectations since the canal opened its expanded locks last June.  The authority initially thought two or three larger ships would pass through each day, he said, but the daily average has been nearly six.

The COSCO Development had to make its 39-mile trip up the Savannah River at high tide Thursday morning to ensure it would fit. Its cargo deck was about 80-percent full, said Griff Lynch, executive director of the Georgia Ports Authority.

"It's everything we've talked about for years," Lynch said. "Now what you're going to see is one after the other. This is going to become more of the norm."