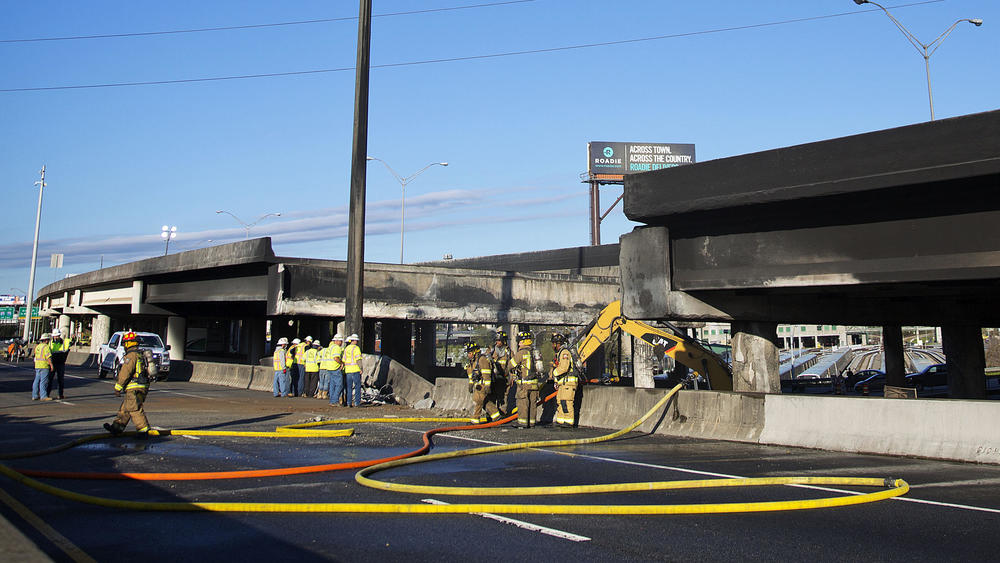 A portion of Interstate 85 that collapsed in March will reopen Monday, Georgia officials say. Here, construction workers and firefighters survey a section of the overpass that collapsed from a large fire in Atlanta. / AP Photo

Six weeks after a bridge collapsed that crippled a crucial piece of the interstate system in Atlanta, Georgia officials say they'll be ready to reopen I-85 by May 15 — more than five weeks ahead of schedule. The road normally carries nearly 250,000 vehicles a day.

Both northbound and southbound lanes of the I-85 bridge over Piedmont Road will be opened to traffic for Monday morning's rush hour, Gov. Nathan Deal said, in an announcement that was made with state transportation officials Wednesday morning.

The March 30 collapse was blamed on a large fire beneath the overpass, in an area that was used to store construction supplies. Officials have said the blaze was set maliciously, and an arrest was made. No injuries were reported.

The plan to reopen the road ahead of schedule means it will be ready for vacation traffic on Memorial Day. To repair the road, work crews replaced 13 columns and 61 beams and logged some 85,000 hours, the Georgia Department of Transportation says.

When officials put extensive detours in place and began the repair process the day after the fire, they predicted it could take several months to get the road ready to carry traffic.