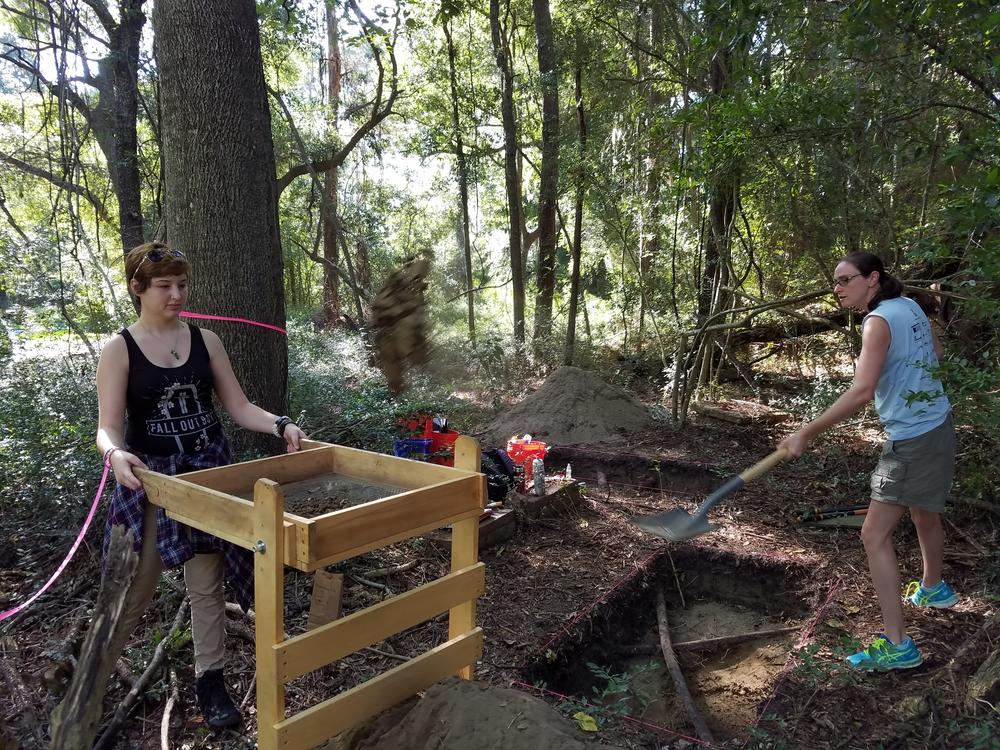 Caption
Armstrong student Kaylee Maricle catches a shovelful of dirt thrown by Professor Laura Seifert on the site of a former monastery and school on Skidaway Island.

On Skidaway Island today, you’ll find a state park, a marine science institute, and a private golf community. But 150 years ago, right after the Civil War, it was home to a monastery and a school for former slaves. An Armstrong State University professor and a team of student archaeologists are digging up the hidden history on the site of the former school.

Students are digging for hidden history on Skidaway Island.

One Saturday, on an empty lot in Skidaway’s private Landings Club, Armstrong student Kaylee Maricle used a wooden frame to catch each shovelful of dirt her professor tossed up from a hole in the ground.

There's a grate in the bottom, Maricle explained, "so when you stick the dirt in, any of the loose or small pieces will fall through. That way the bigger pieces will stay in it and you can just check through and see if there’re any artifacts in it."

Usually, there aren’t. The screen catches a lot of oyster shells, acorns, and scraps of roots. But sometimes they uncover a fragment – like a metal object that Maricle examined with fellow student Chase Freeman. Maricle thought it was piece of a desk, pointing out a flat portion where she hypothesized the wooden desktop once sat.

Freeman agreed. "See, this is the stuff that I love about digging is finding things like this and just the mystery behind the objects," he said. "Like, what is it? What was it used for? Who used it?"

Most of what they’ve found are small, everyday objects: a spoon, buttons, a hook the monks would have used to fasten their cloaks. Professor Laura Seifert said these items show small slivers of daily life for the people who ran the school and those who studied there. But taken together, she said they start to paint a bigger picture.

"We can ask, you know, what did education mean for them?" Seifert said. "And then we can also look at the lives of the monks. Many of them were born in Europe, they came over here, you know, what was their motivation for being here?"

Most of what we know about freedmen’s schools doesn’t come from artifacts like Seifert and her students are finding, according to Ronald Butchart, an emeritus professor at UGA.

"I know of no archeological work done on freedmen's education, none whatsoever," Butchart said. He’s spent his career studying the education of formerly enslaved people, which he says is a critical piece of history.

There’s actually a lot of information about freedmen’s schools in old documents and letters: teaching methods, the names of students and teachers, details about their daily lives. But Butchart said a dig like this one is important no matter what it uncovers.

Butchart thinks that educating locals could help break through negative stereotypes about black education – ideas, he said, that mask just how important schooling was to people coming out of slavery.