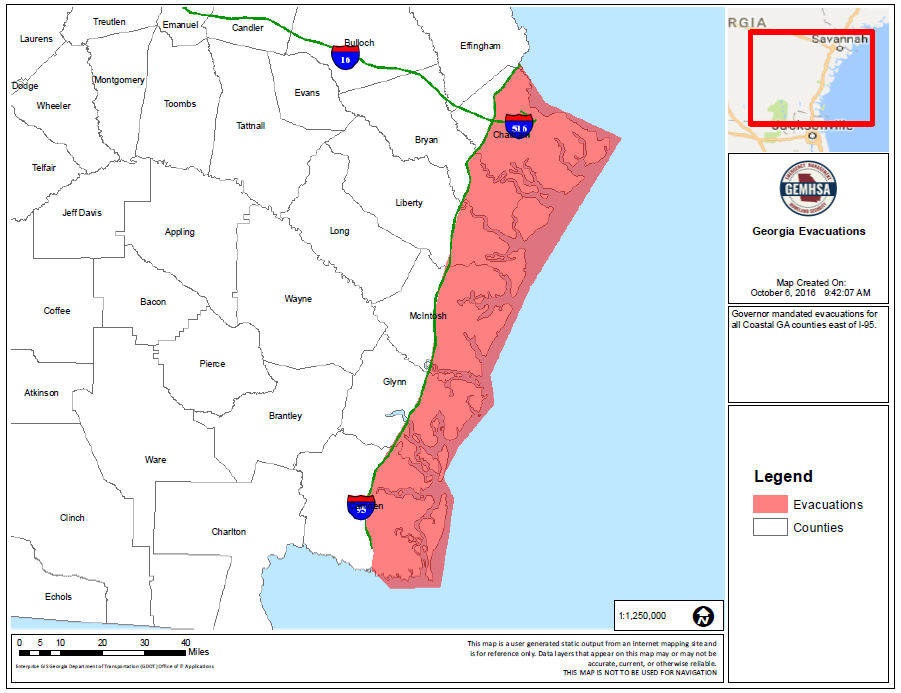 This a message from the Georgia Emergency Management and Homeland Security Agency. The governor has expanded the State of Emergency to 30 counties.

State officials are declaring mandatory evacuations for all residents east of I-95. This includes the following counties: Chatham, Bryan, Liberty,  McIntosh, Glynn and Camden.  This mandatory evacuation is particularly important for residents living on barrier islands and in low lying areas. The additional 24 counties that are part of the State of Emergency are all under voluntary evacuation.

To facilitate these evacuations – the state has implemented contra-flow on I-16.  That means I-16’s eastbound lanes are now reversed and flowing westbound only from Savannah to U-S 441 in Dublin.  That’s a 123 mile stretch of interstate.  Motorists can cross over on paved medians on I-16 east of I-95 and on I-16 at State Route 26 in Laurens County.

Contraflow means I-16 eastbound lanes will reverse to westbound traffic only from Savannah to US 441 in Dublin. That’s a 123 mile stretch of interstate.

For coastal Georgia areas, take westerly evacuation routes such as:

For regions including Clinch, Ware, Pierce, Atkinson,  and Bacon counties:

For Lowndes and Brooks counties: take I-75 north

For Colquitt, Tift and Turner counties:  Take State Route 520 west to I-75 north.

There are currently eleven RED CROSS shelters open in Georgia.  And another scheduled to open tonight at 7.  They are:

In Augusta – Trinity on the Hill United Methodist Church