A Renaissance for Atlanta's Vine City and English Avenue? 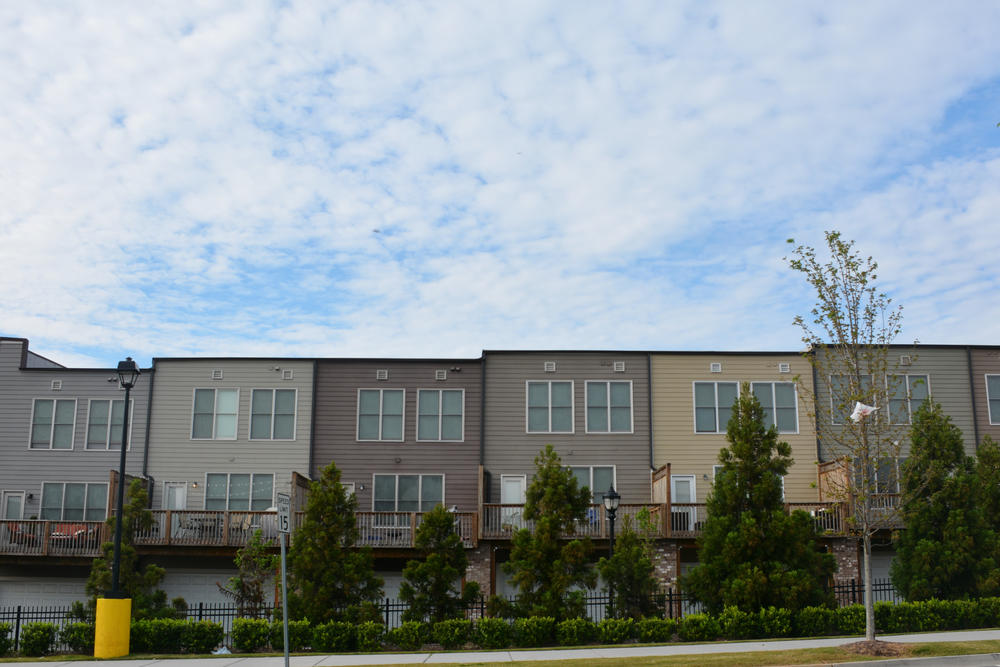 The view of the Historic Westside Village from the parking lot of a nearby Wal-Mart. Brittney Hart moved in to the complex with the help of Invest Atlanta.

After more than a year, Brittney Hart is still settling into her new home, and she’s OK with that. On a recent visit, a large mirror sat, unhung, against the dining room wall, and the only place to sit down that wasn’t the floor was a large grey sectional in the living room.

Meet Brittney Hart and learn about the homebuyer incentive program that helped her move to Vine City.

“Everything is still a work in progress,” Hart said looking around the main floor of her three-story townhome. “I’m very particular as to what I want in my house, so I’d rather take time."

Hart, a 26-year-old graphic designer, lives in Vine City about two miles west of downtown Atlanta in a gated complex of colorfully-bricked townhomes. The development sits, almost tentatively, in the neighborhood’s southwest corner and looks very different than its surroundings.

Much like English Avenue to the north, Vine City has major housing problems. First, the people who live in the area tend not to own their homes. According to 2014 U.S. Census data, about 85 percent of residents rent compared to about 35 percent statewide. Renters certainly can care about where they live, but don’t have the same monetary investment in their neighborhoods as homeowners.

Then, there’s the issue of empty and abandoned property. That same U.S. Census data says more than 40 percent of area homes are vacant compared to about 13 percent statewide. Driving through the area, it’s not uncommon to see boarded-up homes sitting on overgrown lots with trash piling on the curb.

But Hart doesn’t live in a bubble. She knows the area has challenges. She saw them the first time she drove through Vine City, an experience that’s stayed with her.

Still, Hart decided to move in. She liked that Vine City was close to downtown and transit-rich, with two MARTA stations of its own. She also liked that the neighborhood was predominantly African-American and had once been home to civil rights leaders like Dr. Martin Luther King, Jr. and Coretta Scott King.

Hart saw the area’s challenges as opportunities. Vine City was a place for her to put down her roots, a community she could shape and make her own.

“There’s potential here where I can flourish and engage and collaborate with other people that live in the neighborhood,” Hart said. “The potential of everything is why I moved.”

Dawn Luke, Senior Vice President for Community Development for Invest Atlanta, sees the same potential in the area and people like Hart as the key to unlocking it.

“The best way to get neighborhoods revitalized is to have homeowners that come in that have a vested interest,” Luke said during a recent meeting at Invest Atlanta’s offices. “You have a different perspective when you own a part of your community.”

Luke oversees a program born of that philosophy: the Vine City Renaissance Initiative.

The initiative gives homebuyers $10,000 in down-payment assistance if they buy a home in Vine City or neighboring English Avenue and stay for five years. Invest Atlanta hopes those homeowners will follow their investment in a home with an investment in their community.

“If you’re that person that wants to be vested in the community [so] that you can have impact on how it’s developed going forward, this is the program for you,” Luke said.

The program has some restrictions. There’s an income cap of about $66,900 for single-person households, and applicants can’t own any other property. Invest Atlanta explains those rules and the rules of the four other homebuyer incentives it offers at monthly information sessions.

At a recent meeting, about 50 prospective homebuyers showed up to learn more about the programs. During the meeting, I pulled Luke aside and asked if she could see Vine City and English Avenue from Invest Atlanta’s downtown offices. She said yes, walked me to a window, and pointed west.

“There are people that have lived in these neighborhoods for years,” Luke said, musing on the area’s future. "I would love to see those people be able to thrive, remain in those neighborhoods, and have new neighbors that they feel are an integral part of their everyday life. So, it’s all about enhancing their quality of life.”

Hear what residents of Vine City and English Avenue have to say about the future of the neighborhoods.

The idea of motivated, engaged homeowners moving into a community and engineering a renaissance is an attractive one. So is the idea that such a change could happen without displacing current residents.

So far, Invest Atlanta’s program isn’t causing large-scale change in the area. Since October 2014, only five people have signed up for the Vine City Renaissance Initiative (and only four have completed the entire home-buying process). Those aren’t numbers that scream success.

But Luke said the program isn’t about numbers.

"It’s not about ten years from now I want to see that we’ve done one thousand of these loans," she said. "That would be awesome to do that, but to me it’s more about the quality as opposed to the quantity."

Find out how the Vine City Renaissance Initiative is doing so far.

The initiative gets its funding from the Georgia Dome Trust Fund, which was established in 1989 when the City of Atlanta issued $8 million in tax exempt bonds for community revitalization projects. But Luke said, Invest Atlanta isn’t worried about making money on the program. She said they didn’t design it to turn a profit.

“It’s designed to be catalytic, which is very different,” Luke said. “Catalytic means we want programs that are going to make a difference. It’s not about the money and how much we make. It’s about the quality of life that we’re providing for our residents.”

But can five new homeowners have the kind of impact on the area Invest Atlanta hopes to see? Dan Immergluck, Professor at the School of City and Regional Planning at Georgia Tech, said...kind of.

“We’re talking about a neighborhood where there are very few home purchases from year to year," he said. "So, even if they do just a few loans, they’re probably making a significant impact on what’s already going on.”

According to data from the Consumer Financial Protection Bureau, only ten home loans were made in the area in 2014 and only 20 in 2013. Immergluck said five more homeowners makes a modest impact on the market, but warned that housing isn’t a silver bullet for struggling neighborhoods.

“A down payment assistance program, while it could be a key part of a bigger initiative, isn’t going to turn around a neighborhood or draw in lots more people all by itself,” he said.

He said any revitalization effort would need to be comprehensive and address issues like crime and poverty. But those kinds of efforts take large amounts of work, and Alexander worried a neighborhood renaissance would prove too difficult for any one party to manage and would ultimately fail.

“The second concern is actually that it will become so successful that there will be, over a few months, incredible demand for a Vine City or an English Avenue,” he said.

That demand could lead to higher property values, which could displace many of the area’s current residents, many of whom aren't on sound financial footing. According to 2014 U.S. Census data, the area's unemployment rate is close to 25 percent and about 40 percent of residents live below the poverty line.

Still, Alexander said he was optimistic the neighborhoods were headed for better days because of programs like Invest Atlanta’s and all the money being pumped into the area with the construction of nearby Mercedes-Benz Stadium.

“I’m an idealist, and I’m naive, but I think now there’s more hope for English [Avenue] and Vine [City] than we’ve seen in 20 to 40 years for those neighborhoods,” he said.

Hear why a former resident and current neighborhood planner thinks revitalization might happen this time around.

Dawn Luke, with Invest Atlanta, said that kind of turnaround could have impacts felt outside of the neighborhoods themselves.

But, for now, Invest Atlanta’s program in the area has yet to really take off. So, those larger impacts look like they’re a long way away.

Brittney Hart, who came to Vine City with the help of Invest Atlanta’s Vine City Renaissance Initiative, was disappointed to hear about the program’s slow start. She was surprised to hear more people hadn't taken advantage of a process that, for her, was relatively painless.

“Yeah, it was very easy: here’s the grant apply for it, qualify for it, go in there, have an in-person, fill out some forms, and you got a house,” Hart said.

She didn't dwell on the program's low enrollment numbers for too long. We got to talking about some of her big ideas for the neighborhood, like a music festival in one of its vacant lots.

“I know I will have an impact here, and the impact will be change,” Hart said. “I’m gonna’ do something if it’s just walking around cleaning up or if it’s getting a few murals on a couple of these buildings, something’s gonna’ change.”

But, for now, she’s still settling in. Her new neighborhood, like her new townhome, is still a work in progress. 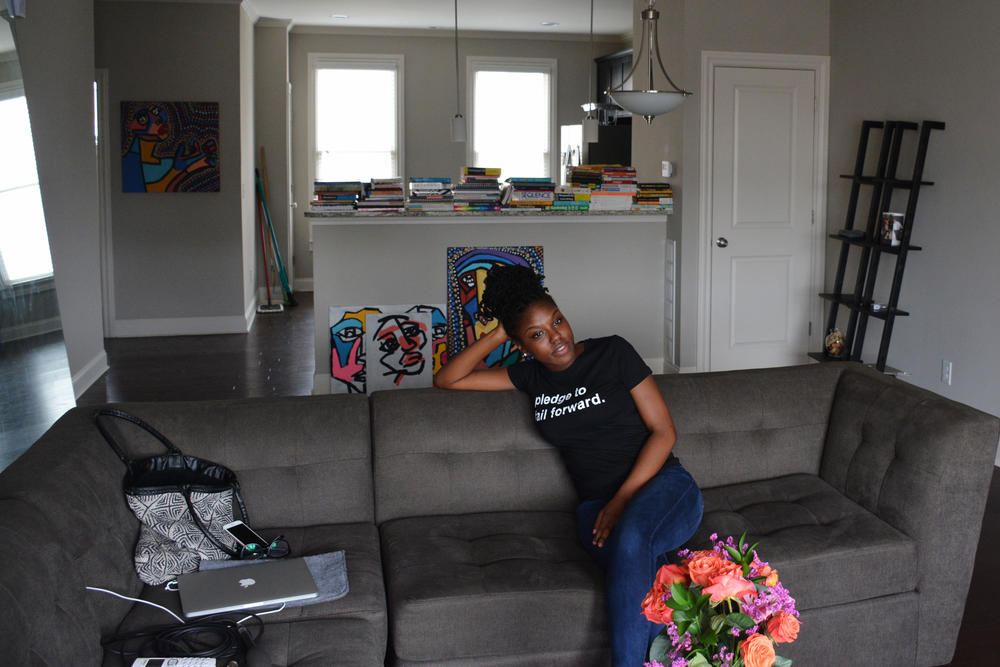 Brittney Hart's happy to take her time getting settled in her new home. 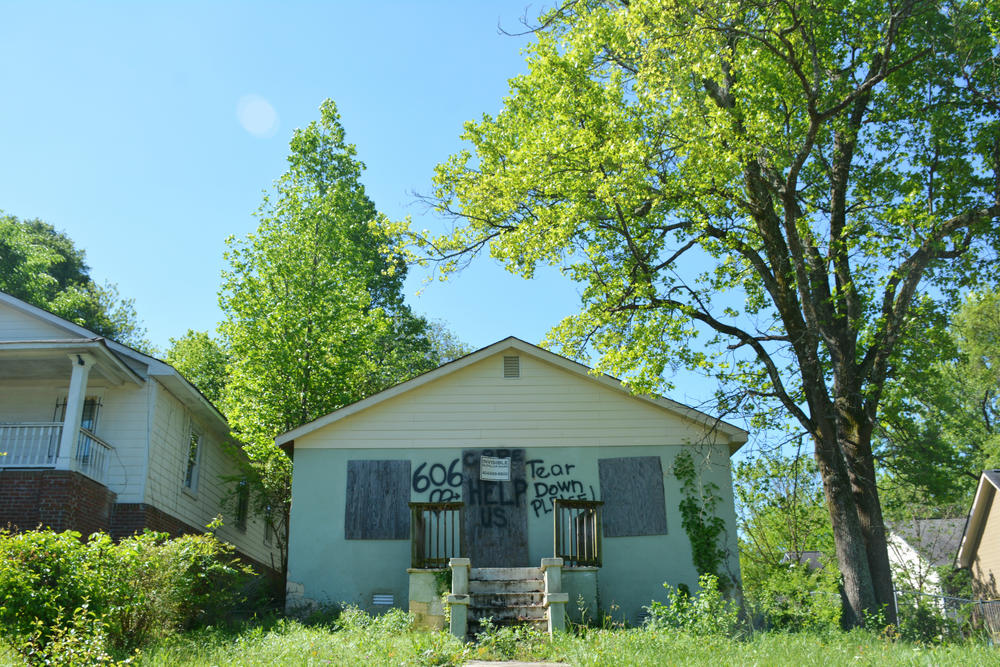 One of the area's many boarded-up homes, more than 40 percent of which are vacant.

The coverage area of the Vine City Renaissance Initiative in the English Avenue and Vine City neighborhoods. 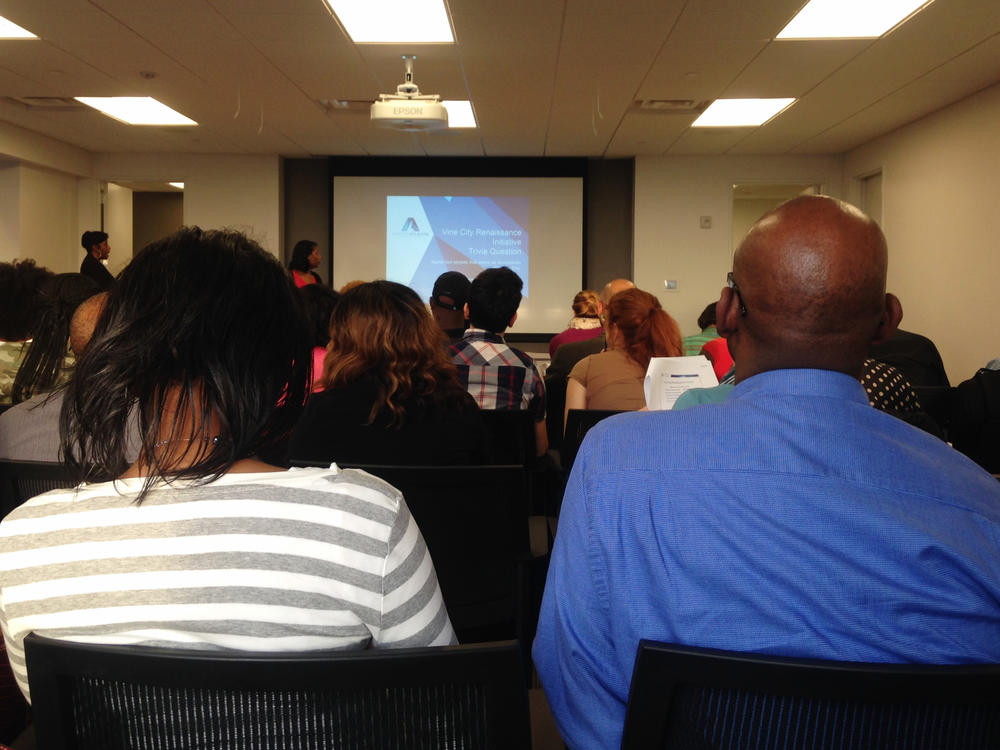 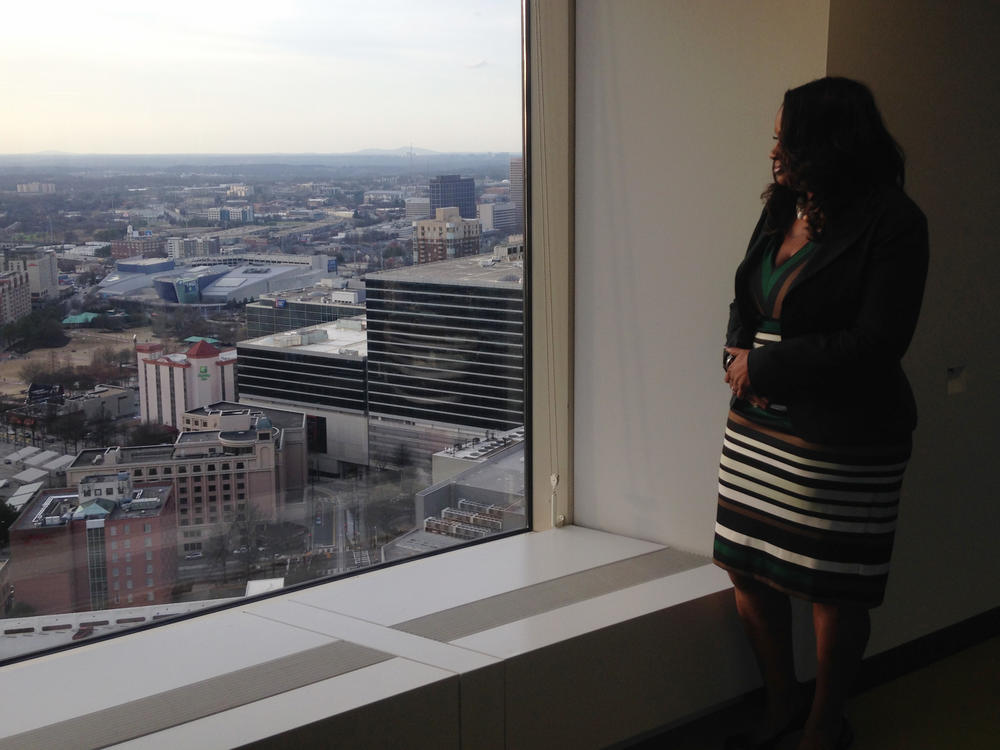 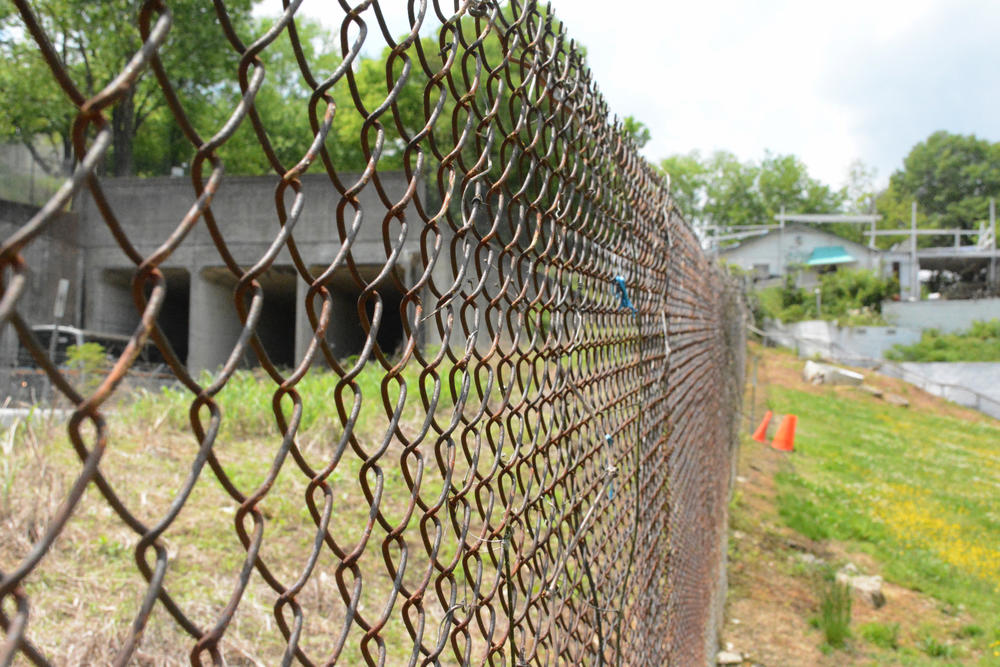 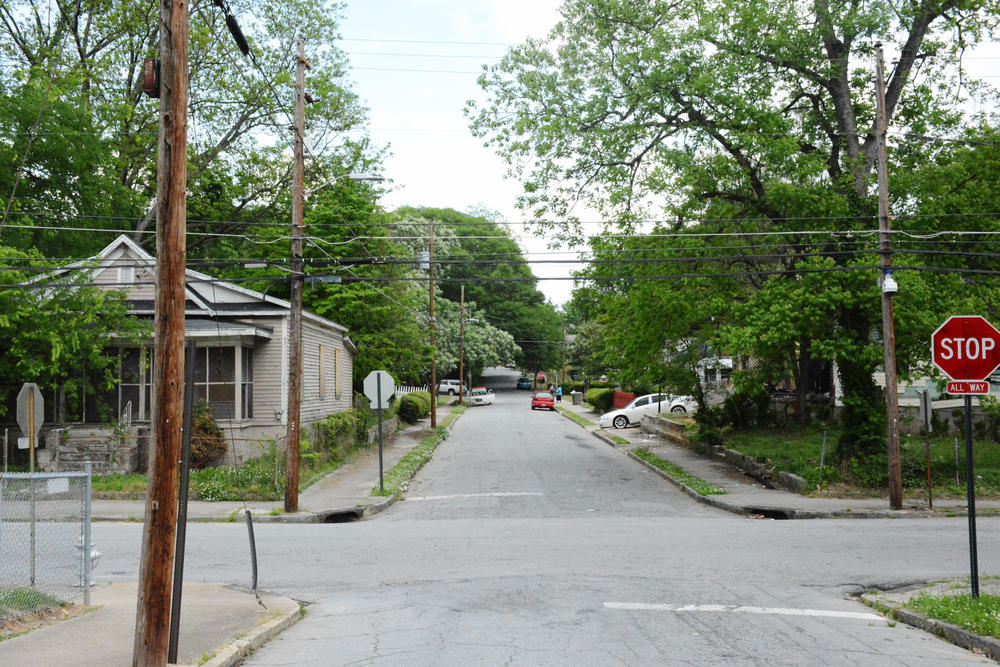 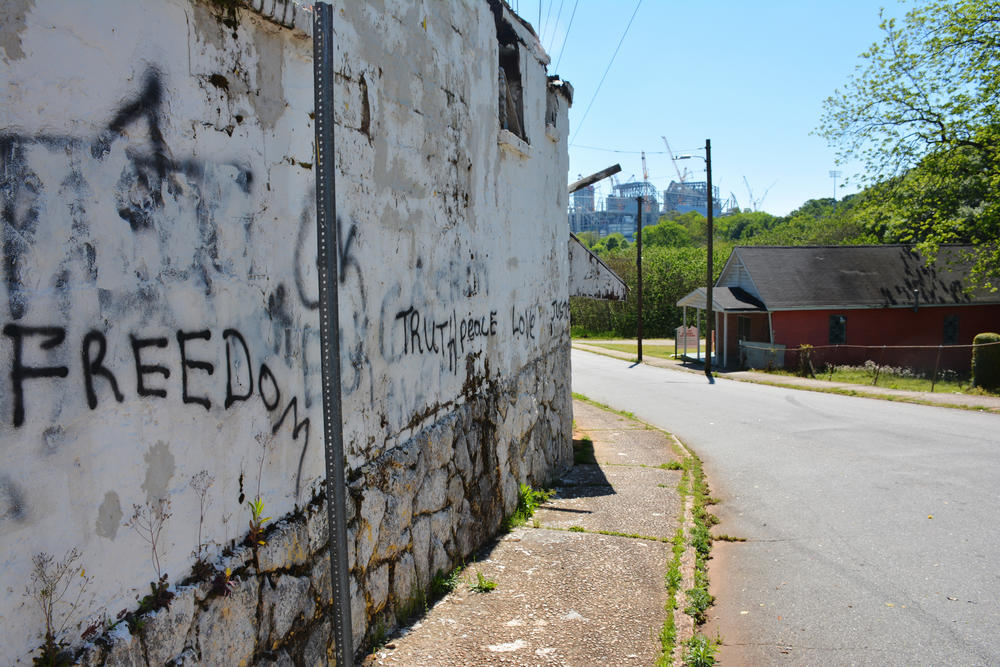 The view towards downtown Atlanta from Magnolia Street in Vine City. 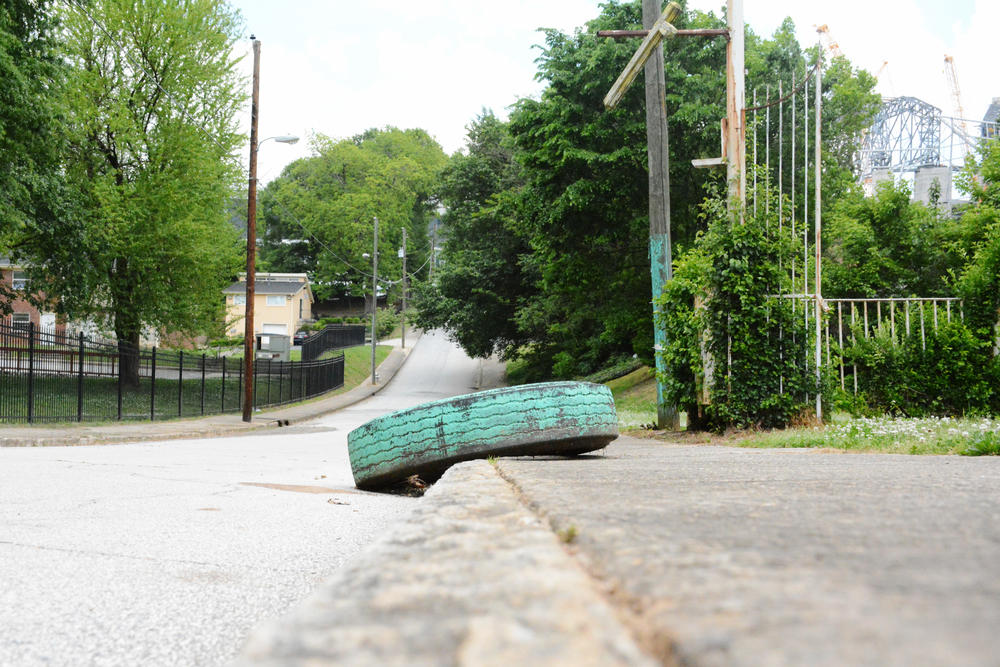 The view up Rhodes Street in Vine City toward downtown Atlanta. Mercedes Benz Stadium rises in the background. 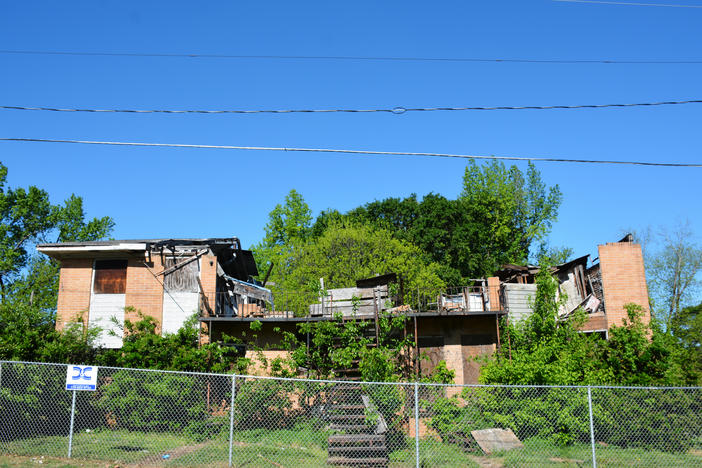 A little bit of country in the city: that's how Vine City resident Alicia Anderson describes her neighborhood on Atlanta's west side. Vine City, like... 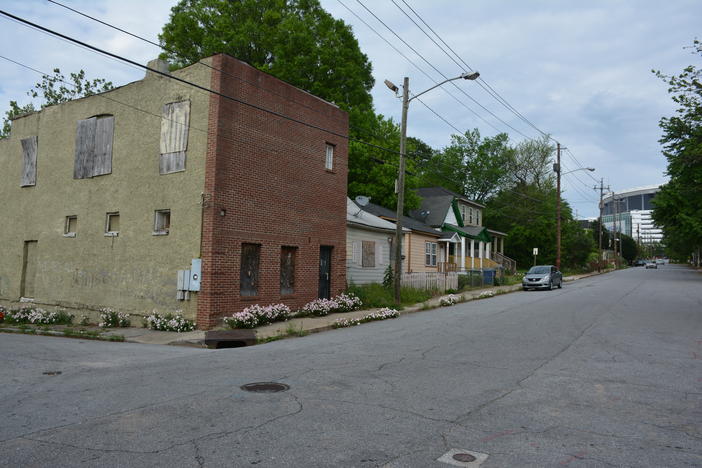 Imagine living on a street where four out of 10 homes are vacant, nearly half of your neighbors live below the poverty line and a quarter don’t go to a...