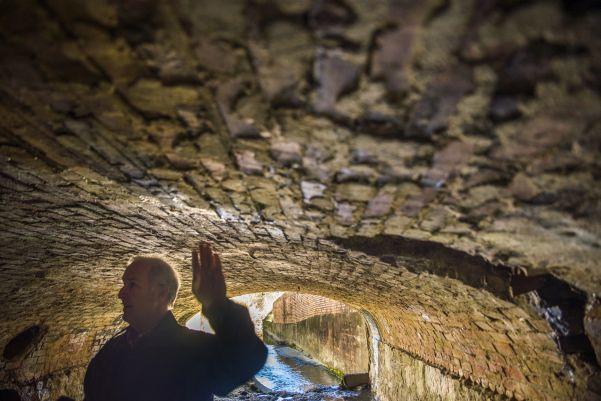 Clay Murphey, a project manager for Macon Bibb County, walked through an eight-foot-high stormwater culvert under a busy intersection. As sloshed through three inches of water, Murphey ran a hand along a jagged crack in the dusty red brick.

"This is the stuff we're concerned about. These large cracks," Murphey said. “You got seepage that's coming from above. That shouldn't be happening. Everytime you're seeping, you are washing away the mortar that's holding this brick in place.”

Then Murphey pointed down to brick rubble lying in the water.

“What happens is ... this happens," he said. "Stuff starts to fail. You can see where someone's made some repairs. Because of failure that happened before.”

The culvert under Hazel and Second Streets shows evidence of Macon Bibb County's failing stormwater drainage system. Murphey says most of us have no idea about the vast system of stormwater pipes.

“You're just dealing with an aged issue," he said. "Nobody sees it, nobody thinks about it until it fails.“

It has failed. There was the day about a year ago when a 14 foot by 6 foot sinkhole opened up on Macon's Vineville Avenue. Or the time Martin Luther King Boulevard was closed because of a sinkhole, a failure that happened just a few blocks from the culvert where Murphey stood.

In 2011, Macon Bibb voters approved raising the sales tax by a penny for big-ticket projects. This is known as a SPLOST or a special purpose local option sales tax. City leaders steered $14 million of it to stormwater fixes. The tax ends in early 2018.

Murphey said the government will spend “every dime of that in a six-year period and barely scratch the surface” That’s because a downtown improvement project showed more stormwater deterioration than first thought.

Last week, Macon Bibb leaders began the process to renew the SPLOST. Murphey says he’ll recommend $30 million dollars from that pot of money for more stormwater repairs. Municipalities across Georgia struggle to pay for stormwater infrastructure. It's part of the reason Georgia gets a D-minus mark for stormwater drainage systems on the American Society of Civil Engineers most recent report card.

Nearly 60 Georgia municipalities have created a more steady stream of money for stormwater infrastructure. They turned their stormwater drainage system into a utility that charges residents and businesses for its use. Brant D. Keller, director of public works and utilities in Griffin, helped create the state's first stormwater utility back in the lat 1990s.

“Trying to get a SPLOST to fund capital projects is one thing but you’ve got operations, maintenance and environmental aspects of the stormwater program also." Keller said.

Macon-Bibb isn’t on the verge of utility. But its open to suggestion. Late last year, Macon Bibb leaders called for a complete assessment of the ailing stormwater system, done by the Macon Water Authority. Water Authority President Tony Rojas said the study identifies the needs of the stormwater management program and it also looks at the possibility of how those needs could be addressed.

One option Macon-Bibb could consider is to transfer stormwater oversight to the Authority. “Maybe it would make sense for us to be the entity in charge of water in Macon Bibb," said Rojas.

For now Macon Bibb leaders will focus on spending what they have left on stormwater fixes and look to the penny for more money down the line.