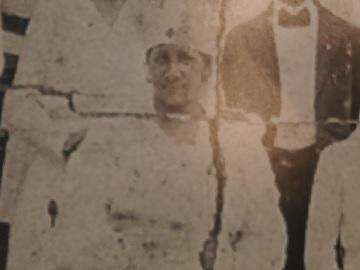 In the early 20th century, women weren’t supposed to be loud or assertive. That was even more true for women of color - but that didn’t stop Savannah teacher, writer, and organizer Rebecca Stiles Taylor. Here's her story, as we focus on Forgotten Women in Savannah history.

It’s tough to assign a label or title to Rebecca Stiles Taylor.

"She had been a very successful teacher and social worker who had been in all of the black neighborhoods of Savannah," says Hugh Golson, a retired history teacher and a cousin of Stiles Taylor. "And she had a statewide and national reach through her work with the National Association of Colored Women’s Clubs."

She also founded several such clubs in Savannah, and wrote for the popular national newspaper The Chicago Defender. It’s a lot for one person. Golson traces all that work back to what she learned at Atlanta University.

"They picked up the mission to educate everyone of color," he says. "They gave them a mission, almost like a preacher in the pulpit or a missionary on his ship going to a foreign shore. They were to go back. They were to cleanse, protect, and educate the lesser of all the children in their cities and communities."

By all accounts, Stiles Taylor was a woman on a mission. Mary Edith Stiles described her aunt in a video for the Georgia Women of Achievement program.

"She was talented, she was smart, she was aggressive," says Stiles. "She knew what she wanted and she knew exactly how to get it, even if it did seem she was demanding and aggressive."

What she wanted - and how she got it - ran the gamut: from working overtime to educate poor students, to becoming the first African American woman to serve as Savannah’s Probation Officer in Juvenile Court. In her newspaper column, she took early stands on big civil rights issues, like segregation in the military and poll taxes.

She even lobbied the president in 1918 after a lynching in Valdosta.

"It was pure savagery," says Golson. "And these black women of color are bristling over this, and they send a strong letter to President Wilson, and her name is front and center at the bottom: Rebecca Stiles Taylor."

Stiles was a prominent name in Georgia. President Wilson grew up in Augusta, and Hugh Golson believes her name caught the president’s attention.

"He did write up a scathing rebuke in the federal register, which was probably a pretty strong step for this man who had segregated the bathrooms of federal agencies when he took office," Golson says.

Great-niece Saundra Stiles Thomas says her aunt was known for that kind of gutsy action. "I remember Aunt Rebecca, and I remember how strong an image she was," Thomas recalls. "A lot of people were afraid of Aunt Rebecca, because she didn’t play."

Rebecca Stiles Taylor died in 1958. But her family remains prominent in Savannah - pastors, teachers, leaders of charity groups. Thomas says that’s in part thanks to Stiles Taylor, who she calls an elder of the family.

"Aunt Rebecca was the milestone," she says, "the person that kept the family together during her time."

And, Thomas says, the person who instilled values of achievement and service in her family and community.