What Comes After Public Housing? 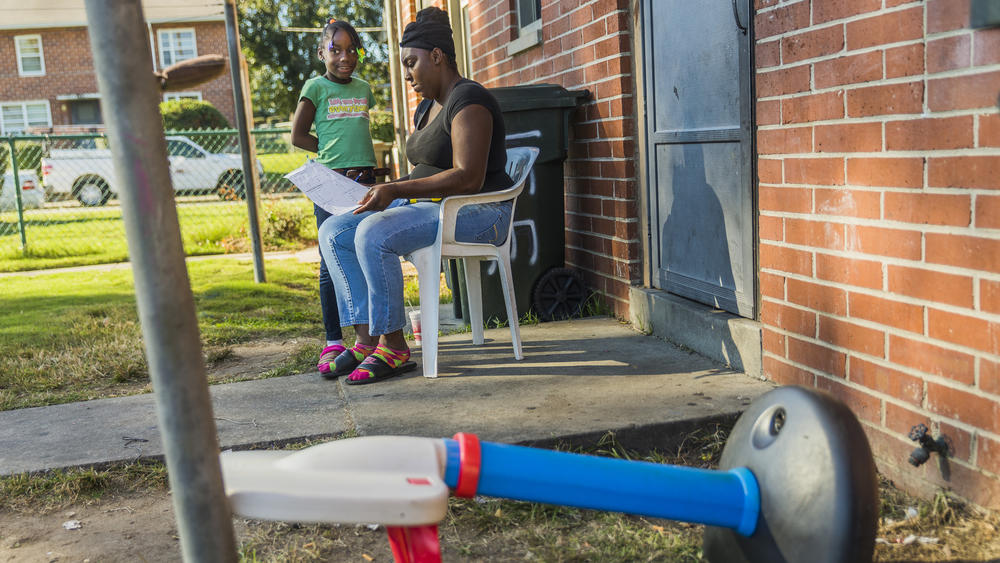 A little after three in the afternoon, kids start walking back to Tindall Heights from Ingram Pye Elementary School and, from a little further away, Ballard Hudson Middle School.

As they head down the hill into, ironically, the bowl that encloses Tindall Heights, they see a little over 27 acres of two story red brick or avocado green apartment blocks. There are over 400 hundred apartments total. Clotheslines spider web through empty spaces between the buildings. All of this dates back to World War Two.

The Macon Housing Authority manages Tindall Heights. They have a plan to destroy it all and build back about 330 apartments, 270 here and the balance somewhere else in town.

In so doing, Tindall Heights would join other decades old public housing projects like Cabrini Green in Chicago or Bowen Homes in Atlanta on the list of properties knocked down in the name of progress. The idea is to disperse poverty across cities and give residents an opportunity to live in new neighborhoods with access to schools of their choice or better access to jobs.

Before any of that can happen, everyone here has to move out. For Auset Reaves, this is welcome news.

“Me, I was already ready to move,” she said. “And I'm excited about it. And I'm glad that they are doing this.”

Reaves is a college student studying cosmetology. She hopes to go on to a four year nursing degree after that. She has lived here for five years with her four children. She says it hasn’t been a struggle exactly but it hasn’t been a picnic either. Now that the wheels are turning, she is dreaming.

“I would like to get a house for my children,” she said.

Just where the house is doesn’t matter as much as what Reaves hopes it might mean.

“Well, it's going to be better cause my son's going to be able to go to a better school,” she said. “Well, the school's he's at, it's ok. But I want more for him. And I think that's a good opportunity.”

None of this would be possible without the help Reaves and other residents are getting through the Section 8 Tenant Protection Vouchers, or TPV from the federal Department of Housing and Urban Development, or HUD. Section 8 is one of the oldest Federal programs for subsidizing low income housing. Today about two million US households depend on it.

June Parker, head of Macon Housing Authority, says that TPV opportunity is important. The MHA is reminding residents not to move, not to do anything to violate their terms of residency, not to find a new place yet at all, all so they can get the voucher help. The vouchers are a tool for real choice.

“The residents have options,” Parker said. “They get to come in and say 'This is what I need.' ”

That choice brings a challenge. Where do you start looking for a new home? Go looking for a comprehensive list of Section 8 housing and you won’t find it. Neither your local housing authority nor HUD keeps one. So like most things today, you start on the internet.

It took a week of web searches for a reporter to put together a list of one hundred and ninety five section 8 properties in Macon. Your googling skills may vary, but remember many people in public housing don’t have internet access. Linda Couch, senior vice president for policy at the National Low Income Housing Coalition, says this is how the Section 8 search goes.

“It can be really, really difficult,” Couch says.

She says finding Section 8 housing should be easier.

“Theoretically a voucher holder could go to any rental website. So Zillow or Craigslist or whatever,” Couch said.

And there they would find Section 8 housing, but mainstream commercial sites don’t list things that way. Government listings aren’t much better.

“HUD has never maintained a database of participating landlords. And I'm not sure why,” Couch said.

Joe Phillips of the Atlanta HUD office says that’s because curating that list is the job of local housing authorities.

June Parker says the Macon Housing Authority does actually have a list of 900 cooperative local landlords, but they keep that list private. Tindall Heights tenants will only use that list with the help of five housing counselors who will guide them through the relocation process. The best, but still far from comprehensive, public list of local options can be found at http://georgiahousingsearch.org >.

Linda Couch says list curation is only a part of a housing authority’s job.

“If people are being displaced from their homes, the housing authority has a responsibility to insure that residents have real options,” Couch said.

Our list is short on the educational options Auset Reaves and other mothers are looking for. Only one house can be found in an elementary school district that performed at a B grade level on Federal standardized testing in 2014. Almost all the available houses are in failing districts. Apartments fare a little better with a smattering of them in B level districts. No properties surfaced in Bibb County’s highest performing A level district.

Still, June Parker says that isn’t the full story. The Housing Authority regularly tries to recruit new landlords to the program to expand residents’ options. There are obvious limits.

“If there are no landlords, our hands are tied,” she said. “We only have so many resources and if the homeowner or the landlord chooses not to be part of the section 8 program, we cannot force them.”

Parker says that can be frustrating.

“It can be yes. Very frustrating,” she said. “But you can't force people to have your values.”

“I haven't really decided what side of town I would like to stay on, but I'm gonna decide something pretty soon,” she said.

The good news is that Reaves doesn’t have to decide anything soon. Most likely she won’t be moving until next summer. Until then, she can keep looking for that perfect house.