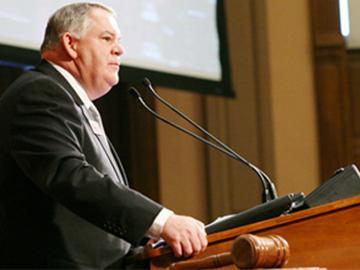 Clergy who disagree with same sex marriage wouldn't have to perform them, under a bill floated by state House Speaker David Ralston.

Ralston proposed the so-called "Pastor Protection Act" at a Republican retreat on Jekyll Island this weekend.

A spokesman for Ralston tells the Atlanta Journal-Constitution that the bill would be narrowly crafted to ensure that clergy member would never be required by the government to perform a wedding that doesn't match their religious beliefs.

GOP lawmakers in other states are considering similar legislation, in reaction to the Supreme Court's decision legalizing gay marriage nationwide.

Meanwhile, at least two Georgia probate judges have stopped performing all marriages because of their opposition to same-sex marriage.

The magistrate in Dodge County tells WMAZ-TV that he's no longer performing wedding ceremonies for any couple...regardless of their sexual orientation.

The probate judge in Johnson County has taken the same stance.