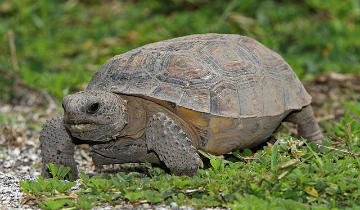 Georgia’s official reptile could be threatened by the state’s booming solar industry.

Solar farms need vast stretches of undeveloped land and abundant sunshine. That also describes the ideal habitat for the gopher tortoise. Jon Ambrose of the Department of Natural resources tells the Augusta Chronicle that solar panels take away a key food source for the reptiles.

The large panels block the sun from reaching the ground, meaning vegetation can’t grow. Fences around the farms can also make it difficult for the tortoises to move to other areas.

Federal officials say they’re creating maps of tortoise habitats for solar companies. A spokesman for Georgia Power says the company is careful about where it’s building solar farms and has relocated some tortoises to a special refuge in Burke County.