'Not On My Land': Coastal Residents Fight Building Of Palmetto Pipeline 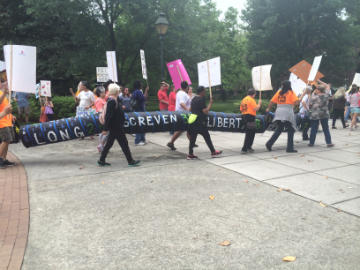 It's called the Palmetto Pipeline, a billion-dollar energy project that would run 360 miles through South Carolina, Georgia and Florida. The energy company Kinder Morgan is pressing ahead with its plans even as other pipeline projects, such as the Keystone XL, face grassroots opposition and years of delays.

The Palmetto Pipeline would connect with an existing one in South Carolina to carry petroleum products coming from the Gulf Coast to Jacksonville, Fla. At a public hearing hosted by the Georgia Department of Transportation near Savannah last month, Kinder Morgan spokesman Allen Fore said the project would assure the region of a steady fuel supply.

“So we're trying to design a project that's going to meet current needs and also the future needs of the states of Georgia, South Carolina and Florida,” Fore told the 600 or so in attendance. It was a tough crowd. One by one, dozens of opponents went up to the mic, raising concerns about the risk of a pipeline leak and damage to sensitive coastal habitats. They also objected to Kinder Morgan's request to use eminent domain to condemn land for the project.

“Now, as far as I can tell you all, is there anybody who wasn't able to get gasoline to come here today?,” Henry Morgan said to laughs from the crowd.

He scoffed at the idea that the area needs more oil. It's currently supplied mostly by trucks, along with ships coming into the port of Savannah. Morgan, who is both an engineer and a lawyer, opposes the pipeline for other reasons. He owns land near Savannah that’s been in the family for decades. When a letter arrived earlier this year asking for permission to survey the land for the Palmetto project, Morgan said no.

“It's like the South is, you know, the land is everything,” he said.

Kinder Morgan officials say people like Henry Morgan are the exception. Company spokesman Allen Fore says more than 90 percent of Georgia landowners who've been asked for permission to survey their property have agreed. If residents don't see the need for the project now, he says, wait a decade or two.

“Right now there is stability. The question is, how long will that stability last? And I don't think anybody from a reasonable perspective will believe that the gas prices where they are now are going to stay that way,” Fore told the April meeting.

Even with U.S. oil production poised to go up, energy companies are facing more local fights over infrastructure, says Carolyn Kissane. She's an energy and environment professor at New York University's Center for Global Affairs. Kissane says the fight over the Keystone XL in the Midwest has empowered pipeline opponents and made it harder for companies. “Maybe 10 years ago, they could build pipelines and there wasn't as much opposition to the construction of the pipelines, but in light of how much more oil is being produced in the United States, I think it's a really challenging situation for companies,” Kissane said.

Even Governor Nathan Deal, a Republican, opposes the Palmetto project. It's now up to state transportation officials to weigh in on Kinder Morgan's request for eminent domain. A decision is expected later this month.