Ahead Of Hearing, Savannah Protestors March To "Push Back The Pipeline" 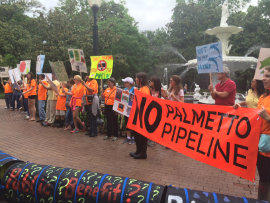 As state transportation officials prepare to host a public meeting about the proposed Palmetto Pipeline through Georgia, protestors gathered over the weekend to oppose the project.

Roughly 200 people carried signs through Savannah’s Forsyth Park on Saturday and chanted, “Push Back the Pipeline!”

The energy company Kinder Morgan wants to build 360 miles of pipeline to carry petroleum products through South Carolina, Georgia, and Florida. The company says the pipeline would create jobs and bring lower gas prices to the region.

The rally was organized by Push Back the Pipeline, a coalition of groups including the Savannah and Ogeechee Riverkeepers. Organizers said they’re worried about the possibility of the company taking private land through eminent domain, and the risk of environmental damage to wetlands.

Roger Bowman, who lives in Effingham County, said he doesn't believe the project is in the public interest.

"The idea that there's this disturbance, very adjacent to where we live, for a company to make money to take petroleum someplace else doesn't make sense to me," he said.

UPDATE, 5:39 p.m., April 20: The DOT is scheduling a second hearing for 5 p.m. May 7 at Augusta Technical College, Waynesboro Campus Auditorium in Waynesboro, Ga.