Does Living Near A Superfund Site Increase Cancer Risks? 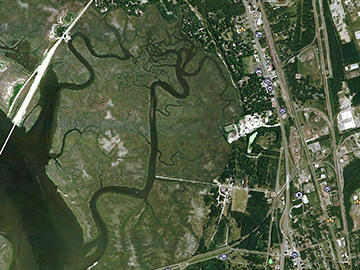 The Ken Burns documentary "Cancer: The Emperor of All Maladies" debuts on Georgia Public Broadcasting Monday, March 30 at 9 p.m. In conjunction with the airing of the three part documentary series, this story examines the threat of cancer in Brunswick, Ga. near a superfund site.

Just north of Brunswick, there is a slice of land that is classic coastal Georgia - 700 acres of marshland. Birds dot the sky and redfish, mullet and shrimp swim in the creeks and rivers. But looks can be deceiving.

By some estimates there is around three hundred thousand pounds of mercury in the ground and a similar amount that was released to the estuary.

For 70 years, at LCP Chemicals Industrial facilities, oil was refined, electricity generated and paints and chemicals manufactured. Toxic waste was dumped on the soil, released into the air, leaked into the ground water and into the adjacent tidal marshland. The former site is the poster child for the federal Superfund program.

Some of the waste - mercury, lead and chemicals - polychlorinated biphenyls - cause endocrine and neurologic disorders. PCBs can also cause cancer. So far there are no reports of unusual numbers of cancers or other health problems in Brunswick, but the toxic waste is there in the environment and people are worried.

They voiced their concerns at an information session in February about the cleanup of the LCP site in Brunswick.

Recent newspaper reports suggest contamination from the LCP site may have gotten into fish, soil and even the people living around Sapelo a barrier island 30 miles away.

J.R.. Grovner is a 39-year old father of two who was born and raised on Sapelo. He is one of 60 inhabitants of the island, many descendants of slaves, who hunt and fish for their food. He attended the meeting to learn and wonders whether he is affected.

“They said the level was pretty high. I guess because we eat a lot of fish and eat a lot of shellfish and stuff like that from off the island,” he says. “ I guess I’m a contaminated fellow.”

In 2009, toxicologist, Lorraine Backer, at the Center for Disease Control National Center for Environmental Health, learned about a study of environmental contaminants in dolphins near Sapelo. The dolphins had high levels of PCBs and some also had endocrine abnormalities.

“ I was interested to know if whether or not what we know about the contaminants in dolphin populations might reflect what we see in people that share the same coastal resources,” Backer explained.

CDC scientists took samples of the soil, fish and blood from nine residents.

”It turns out that the people in Sapelo Island have the same total levels as the rest of the people in the country, but they have levels of very specific kinds of PCBs that reflect their local environment,” she noted.

Since 1992, the Georgia Environmental Protection Division has been warning people immediately around the LCP site to limit their consumption of locally caught fish. Now, scientists think PCBs from the LCP Superfund site may have migrated along the Georgia coast and that advisory may need to be expanded.

“If it’s getting as far away in the fish and the food chain as humans on Sapelo, then obviously it could get to people on St. Simons, Brunswick, and points south in the same radius,” says David Kyler, of the Center for a Sustainable Coast - a non-profit conservation group based in St. Simon’s Island.

EPA Proposal For Cleanup Rankles Some

The EPA has a plan - 20 years in the making -– which it says will reduce health risks by removing and containing the toxic chemicals and metals. John Morris, the Remediation Director for Honeywell, the company that owns the superfund site and will have to pay for its cleanup, thinks it’s a good one.

Under the proposal, seven acres of contaminated marsh will be removed and another 18 acres will be covered over. But David Kyler of the Center for A Sustainable Coast says more needs to be done.

”It’s not adequate, it’s ridiculous,” says Kyler. “As far as I can tell, the only way to do the best damage control is to remove as much of the toxic material as you can.”

Kyler thinks at least 81 acres should be remediated. Honeywell’s Morris says that is not practical.

“When you dredge the marsh you have to replace the soil that it is dredged, and there is no soil replacement for marsh soil except marsh soil,” Kyler points out. “In taking out chemicals that are basically at background levels, you do more damage to the marsh than good and you can’t get that except from another marsh.”

Local residents and environmental groups have written the EPA, urging it to change its plan. So far, the EPA hasn’t revised its cleanup proposal based on the new data. It is expected to make a final decision within the year.

A reminder: The CDC report didn’t find any unusual numbers of cancer or endocrine disorders in the residents. It didn’t look for any, but even if it did, epidemiologists say documenting increased health risks - especially cancer - from low-level environmental pollution is extremely difficult.

“There’s no way in the world that they’d be able to clean that up,” he shrugs. “They try to cover it up on site and cover it up in our minds. “