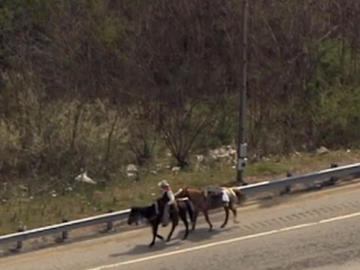 A cowboy riding one horse and guiding another on the shoulder of a busy downtown Atlanta freeway is on a cross-country trek.

Scroll down to see video of the cowboy on the freeway

WSB-TV reports that a police officer guided the cowboy toward a less-traveled city street. The station reports that Mishler is trying to reach Indiana by June for his sister's birthday.

WAGA-TV reports that Mishler is on a mission to fight childhood hunger and hopes to eventually make it to Washington, D.C. When that station's news crew caught up with him, he sang a cowboy song.

The Wisconsin State Journal has reported that Mishler has a doctorate in philosophy and has worked as a bail bondsman and a horse trainer.