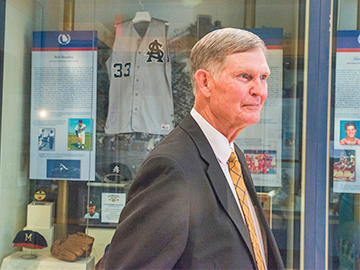 This weekend eight sports legends with ties to Georgia will be inducted into the state’s athletic Hall of Fame.

Saturday’s ceremony in Macon will showcase athletes like Maconite and former baseball player Bobby Hendley, who has spent much of his life inspiring young athletes who look up to him.

Scroll Down To Watch The Video Profile Of Bobby Hendley

It’s hard to talk about Hendley without talking about another great ballplayer by the name of Sandy Koufax.

The two men will forever be tied together because of a September 9th, 1965 game that is still touted as “the greatest game ever pitched.”

The night game in Dodger Stadium was announced by legendary broadcaster Vin Scully. During the broadcast, Scully told the radio audience that the fans in the stadium are sitting up now, “starting to see the pitches with their hearts.”

“I would think that the mound at Dodger Stadium right now is the loneliest place in the world. Sandy fussing, looks in to get his sign, 0 and 2 to Amalfitano. The strike 2 pitch to Joe: fastball, swung on and missed, strike 3!'

(38 seconds of cheering.) "On the scoreboard in right field it is 9:46 p.m. in the City of the Angels, Los Angeles, California. And a crowd of 29,139 just sitting in to see the only pitcher in baseball history to hurl four no-hit, no-run games. He has done it four straight years, and now he caps it: On his fourth no-hitter he made it a perfect game. And Sandy Koufax, whose name will always remind you of strikeouts, did it with a flurry. He struck out the last six consecutive batters. So when he wrote his name in capital letters in the record books, that “K” stands out even more than the O-U-F-A-X.”

While Koufax threw a perfect game that night, Chicago’s Bobby Hendley gave up only one hit which is almost as rare as a no-hitter.

Days before Bobby Hendley’s formal induction into the state’s Sports Hall of Fame, he stood in the museum looking over the exhibit showcasing his career. The baseball glove, old Cubs uniform and a picture of a much younger man stare back at him.

And then Hendley reflects.

"I transferred what I did in baseball and I learned to give credit to other people rather than take credit for something that happened on the field," he says. "You always give your teammates credit for what they did. You don’t make excuses and you don’t lay blame on people for making errors because we all do that."

"I transferred that into a 30-year career in high school in baseball and I never asked kids to do what I wouldn’t do. And I always said that it’s not the first mistake that we make offensively or defensively, it’s an accumulation so it’s the last one that shows up, so we never blame one or the other. This is the way the game is played."

When he considers what his legacy will be, he says he wants people to remember what he did in his life as a player, teacher and coach.

"I tried to set an example for kids that I would do whatever it took to help them as a player and as a person. I was honest with people. I was hard (sometimes)," he says. "Sometimes I would knock you down. But I would pick you up. To have worked with young people for 30-years I would say that baseball…very gratifying. But the years that I spent working with kids was more gratifying. That’s the thing that I love most about this."

Five days after that historic game against Koufax, the two pitchers would face each other again, this time at Wrigley Field in Chicago. This time Hendley would defeat Koufax 2-1.

Along with Hendley, on Saturday, February 21, the Georgia Sports Hall of Fame will enshrine Bill Fulcher, Alec Kessler, Willie McClendon, Reg Murphy, John Schuerholz, Hope Spivey, and Charlie Ward as the newest members of the Hall of Fame.