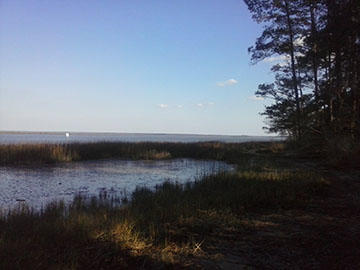 In 1942, the federal government condemned the Gullah lands known as Harris Neck in Townsend, Ga to build an army airfield. The land was never returned.

The U.S. Fish and Wildlife Service now maintains Harris Neck. Monday a proposal was submitted to the U.S. Secretary of Interior that starts the process for helping the Gullah Geechee people return home.

Wilson Moran is a Townsend resident.

"See that island over there? That's Ossabaw Island right off of Savannah. And then this is St. Catherine's Island it's 13 miles long," he said pointing out the view from one of Harris Neck's fishing grounds.

The scenic meadows, marshes and ponds are all hallmarks of the former Gullah Geechee community turned wildlife refuge.

Moran's mother was pregnant with him when his family was forced to leave the land.

"White plantation owners children were very envious and did not like our success," he said.

Moran goes on to say that when the federal government started looking for an army airfield location it presented the perfect opportunity to get the Gullah people off the land.

Reverend Robert Thorpe said he was only a child when he left Harris Neck. He was told his family would get their land back after the war.

"Said ya’ll have two weeks to move. Move? where we gone move to? He said we ain’t got nothing to do with that." Thorpe said his family was told to relocate immediately. "You're going to have to move; if you don¹t move we're going to bulldoze your property down or burn it down. You must be out in two weeks. That's the deadline."

The land was eventually declared to be unfit for an airfield. Tom Mackenzie is the spokesperson for the U.S. Fish and Wildlife Service, the entity that now maintains Harris Neck.

“Following the conclusion of the war the federal government conveyed the land to McIntosh County in June of ’48 for use as a county airport,” he explained.

But the county did not use the land as an airport. According to the Gullah Geechee, the land was used for county recreational purposes. In 1962, U.S. Fish and Wildlife Service took control of Harris Neck.

Since the 70's numerous attempts by descendants to retrieve the land have failed. Now the Harris Neck Land Trust, a group representing all the removed Gullah, is changing its tactics.

They've filed a special use permit that would allow a 99-year renewable lease of the most eastern part of the community.

Wilson Moran says a lease may be the only way to get back on Harris Neck.

"We think they will never ever ever give us ownership."

The land trust says the area proposed is about a mile away from the habitat of the threatened Wood Stork. Last summer, the U.S. Secretary of Interior Sally Jewell went to Harris Neck to announce the bird’s removal from the endangered list. At her request, Gullah descendants began drafting a site plan. They say it includes limited housing for Gullah descendants and a living historical museum.

"The government first should of given it back to us. They didn't do what they suppose to do… knowing that it was a mistake, cause a great injustice was done to us," said Thorpe.

He was only 11 years old when he had to move but at 83, his eyes still filled with tears when talking about the day a government official told his family they had to leave Harris Neck.

"I knew what was happening. And every time something would happen I was right there with my grandfather; right there with him and heard every word. I'll never forget even much the kind of car the man was driving, a brand new Pontiac Station wagon. A gray station wagon."

The land trust says the next step is negotiations between the trust and the Department of the Interior. Land Trust members expect the process to be concluded within a year.