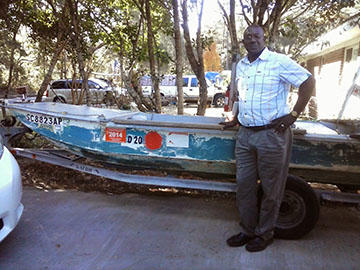 Daufuskie island's population peaked in the 1940s with more than a thousand residents, mostly descendants of freed slaves brought to the coast to harvest rice and sea cotton.

Today, this quiet community has less than 100 people and is nestled between Savannah, Georgia and Hilton Head, South Carolina. Once, Daufuskie Island was a home to Gullah people from all over the low country but when Daufuskie Island's booming oyster industry came to an end in the 1950’s after the beds were poisoned by pollution in the Savannah River, the population began to dwindle.

Today there are only about 12 remaining Gullah on the island. Ervin Simmons lives in Savannah but grew up on Daufuskie.

He now makes his money fishing for crabs and is the President of the Daufuskie Island Foundation. Simmons says transportation and education challenges made staying on the island difficult.

"After 8th grade I came to Savannah cause I have an older sister here and a brother," he said. "That was a rough phase because you had to go to high school and there was no ferry then. So you had to live somewhere else."

Like Simmons many Gullah people stayed off the island to pursue job opportunities. Complicating the matter, much of the African American owned land on Daufuskie falls under heirs property rights. That's when land ownership is passed down amongst family members by word of mouth, when the original owner leaves no will.

James Smith, a law professor at the University of Georgia explains some of the repercussions.

"You tend to get multiple owners. So if for instance a person dies and leaves several children, under the law of inheritance is that they would all get an equal share of the property," Smith informed.

As the years pass, the number of owners multiply and most don’t live on the island. Maintenance responsibility for the property becomes increasingly unclear. According to Smith, some descendants may not be aware they own the land. This series of difficulties can be seen in the many abandoned and deteriorated Gullah homes. The dilapidated structures serve as a stark contrast to the island’s new and extravagant vacation residencies.

Mike Bedenbaugh is with Palmetto Trust for Historic Preservation. He recently revitalized the home of the late Ms. Frances Jones. Jones served as a teacher at Mary Fields School, an institution for black children during segregation.

The home is small with deep blue paint and white trim. The wide porch holds wooden rocking chairs with a perfect view of the Southern oak in the front yard.

"When we first found it, it (had) been vandalized; it had been abandoned for 20 years," he said.

The non-profit received a 150 thousand dollar grant to begin the Daufuskie Endangered Places Program. The program invests money into the homes to rehabilitate them in exchange for a lease. That lease allows them to earn the money back through tourism and donations.

After the homes earns back the original 150 thousand-dollar investment it is returned to the owner. The lease will not exceed 30 years. Some landowners, including Ervin Simmons, are suspicious of the outside help.

“We have a number of local guys, several from the island who are good into carpentry. I’m thinking if we can find funds we could utilize some of the resources we have to rehab some of these houses.”

Bedenbaugh said he understands the concern.

“A lot of unsavory developers have come over here to this island and tried to figure out how they could get land out of people’s hands so they could make a lot of money. During the building boom especially during the 80’s that happened a lot."

Sallie Ann Robinson is a sixth generation Daufuskie native. She said she has also been approached about the project.

"But I still have a couple of aunts that don’t want it done because they’re afraid somebody’s going to take their land."

The Endangered Places Program has since completed a second home renovation. Now organization members are working to get permission from owners to lease several other falling houses on the island. Bedenbaugh said he sees the buildings as storytellers.

"If it was gone those stories dwindle and flutter away. And in two or three generations, this is just another field.”

The Daufuskie Island Council has also been considering becoming a municipal government to improve services from the county.