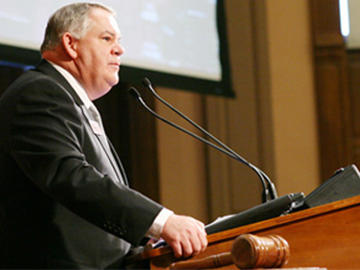 State House Speaker David Ralston is putting his support behind a bill that would allow limited use of medical marijuana in Georgia. Ralston says he hopes to get the bill passed through the House early in the upcoming session.

"You know it's simply a measure that allows families in Georgia that have needs to deal with those needs and not be prosecuted," he says. "And so it's a priority of ours and we're going to move on it."

State Representative Allen Peake has introduced a bill that would allow the use of cannabidiol, which has low levels of THC, the ingredient that makes a person "high". The oil is used to treat seizures. Currently, families with children suffering from severe seizures have to move to Colorado to get treatment using the material.