Switchpitch Flips The Script On Startups And Big Companies 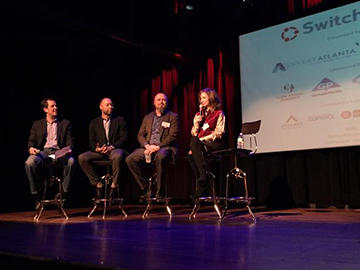 It starts off like any other business-related event in Atlanta: about 100 people slowly trickle into the Terminal West building and take their seats in front of a stage. The glow from smartphone and tablet screens light up the faces of professionals, while the video screen behind the stage sports the logos of several tech-centric companies, along with those for organizations that support the entrepreneurial community.

One could be excused for thinking that this is yet another pitch-athon for early stage companies looking for funding. But this is Switchpitch, an event held in different U.S. cities each month. Here, it's the bigger, established companies that fire up their PowerPoint presentations on stage, and it's the startups that are on the receiving end of the pitches.

At Switchpitch Atlanta, an executive from the Weather Company (parent of the Weather Channel) is looking for a system that will edit, curate, tag and eventually help monetize all the user-generated video it receives. He's followed by someone with Global Payments calling for a universal loyalty rewards program that involves "one solution, versus 20 tabs on a keychain or 20 apps on a phone." If a tech startup in the audience can solve these problems, they can win some important business. But they're not expected to solve the problem by the end of the event, says Switchpitch president Michael Goldstein.

"This isn't a hackathon," he tells GPB News. "This is an immediate need that is funded, where there's a desire to work with an early stage company, and that the big company can move quickly once they identify that. It's about a three month business development process post-event."

Switchpitch started in 2013 after Goldstein and a colleague found that presenting a Fortune 500 company's problems might be an easier way to hook up bigger companies with startups. The first event saw 20 project presentations, and four partnerships resulted. Since that time, some 90 projects and 28 deals have been tracked, with about $2 million in revenue generated for startups.

Ask Goldstein why he thinks Switchpitch works, and he'll mention the efficiencies that are involved in vetting smaller companies, and in helping startups narrow their focus for potential deals. "There are a far greater number of startups today because technology costs are cheaper," he said. "Now you have this proliferation of startups and it's gotten noisy for big companies to figure out who to work with. The big companies don't know who the credible startups or early stage companies are."

Johnson Cook is one of the 80 startup executives in the Atlanta audience. Cook, who's involved with Atlanta Tech Village, has founded Voxa, which promises to make business email smarter. "I'm not expecting that I'm going to find someone at this event who specifically needs my solution," he says, "but if I can have a relationship that can offer an introduction, then that's very valuable to me.

"It does not hurt that I just met the chief innovation officer at Equifax, and the chief CIO of Georgia Pacific. So you always want to be in the room when the right people are there."