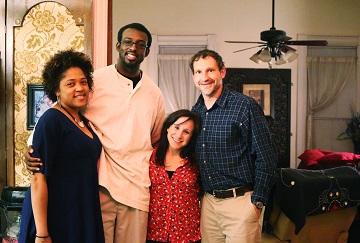 Ever wished to be a “fly-on-the-wall” during an interesting dinner party? GPB Macon begins a series that gives you a chance to share in a gathering of diverse people over good food.

The project is called Macon Conversation, supported by a Knight Neighborhood Challenge Grant. GPB has convened a series of dinner-party gatherings between neighbors in College Hill who live less than a mile away from each other… and who come from different backgrounds – be it racial, generational or socio-economic.The idea is simple – Get Maconites talking with each other on tough subjects. We have permission from the participants to share their discussions on-the-air.

The first Macon Conversation features two couples: Korin Young and Nathan Dees who opened their home to Charise Stephens and Mirage McCrae. In this segment of the conversation, you'll hear Charise describe how her family exemplifies different cultures and how the group sees the generational divide in Macon.