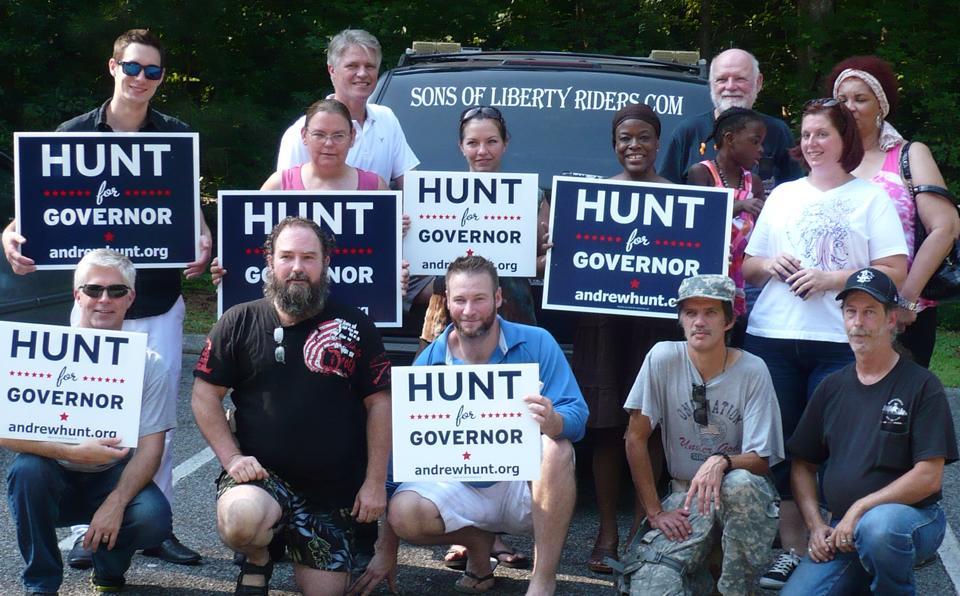 He is an Atlanta engineer with 50 patents who was CEO of a nanotech firm. Hunt says there’s not enough diversity among elected officials. Occupational diversity, that is. Notably, both Deal and Carter are attorneys. According to recent polls, Hunt is drawing about 6 percent of the vote in the race, which appears likely to go to a runoff.

GPB News reporter Jeanne Bonner sat down with Hunt to talk about the upcoming election, his plans for education, and the value of a candidate that isn’t a career politician.

Jeanne Bonner (reporter, GPB News): How do you respond to the notion that a third-party candidacy isn’t a serious one?

Andrew Hunt (Libertarian candidate for Governor of Georgia): Well, there are a number of Independents and also other third party people that have made it into the Governor’s seats in different states. Sitting in Maine, there’s an Independent right now. You can think back to when Jesse Ventura won up in Minnesota, and he was pulling not very dissimilarly to me right now, prior to the debates. And he went on to win.

Jeanne Bonner: And what do you think you offer that your two opponents don’t?

Andrew Hunt: Well I’m an engineer. They’re both attorneys. They are both career politicians. I’m a non-career politician, small businessman that has lots of patents and innovations. So I believe I’m going to bring cost-effective solutions that will actually enhance the performance of government while reducing the tax burden on people.

Jeanne Bonner: One issue that you hear from folks is about taxes. Is there anything else that, in terms of being dissatisfied with the political status quo, are there other things that people share with you?

Andrew Hunt: Let’s talk about education. Because that is definitely a state-type issue. We have schools graduating less than 50 percent less than 60 percent of the students. That is not serving us well in the long run. That is setting people up for social welfare later on. There’s one thing we need to do correctly here {and it is} education. And we need to give people a hand up in life. That cuts out all of these handouts that people don’t want to have to give. So let’s get people well educated. Let’s get them out of prison and transitioned back into society properly so they become part of our economy.

Jeanne Bonner: But I presume you would want to do that without actually spending any more on education. Or do I misunderstand?

Andrew Hunt: No. I’m actually willing to spend some more on education. But I’ll have more cuts out of these special interest groups that will more than cover it. So there will still be tax decreases coupled with a very strong and vibrant educational system. I want to see extended school days… extended school years. I want to see that parents get a choice of the school to send their kids to. And I would inspire the school districts to offer a range of school types. There might be a vocational school, a STEM-- a science, technology, engineering, and math -- a traditional school. And then parents can choose which is best for them. And whatever is practical for them for a geographical point of view, rather than “I live at this address, therefore I must go to this school no matter how good or bad it is.” That’s wrong. We need to have it that parents have a say in where their kids go in our public school system. And have quality public school offerings everywhere.

Jeanne Bonner: What would make an engineer better qualified to serve in public life than some of the other professions that we see gravitating towards political office.

Andrew Hunt: They’ll be more unbiased in finding the best solution to solve the problem. They don’t worry about the politics of the solution as much as how well it will serve the people. And that’s where we need government to be. So, there's not going to be worried or and concerned about this special interest or that special interest. It would be looking at the overall well-being of the people. Over 50 percent of our elected officials are attorneys. We need a broader breadth of people and experiences. They become their own special interest group. They can’t help it. They look at things that won’t hurt attorneys when they are in office and how they can do it. It’s just ingrained in them. We need a smaller portion of our elected officials to be attorneys. Both Deal and Carter are attorneys and I feel like we really need to make a change to people that will find effective solutions. And not {just} talk about the problems.