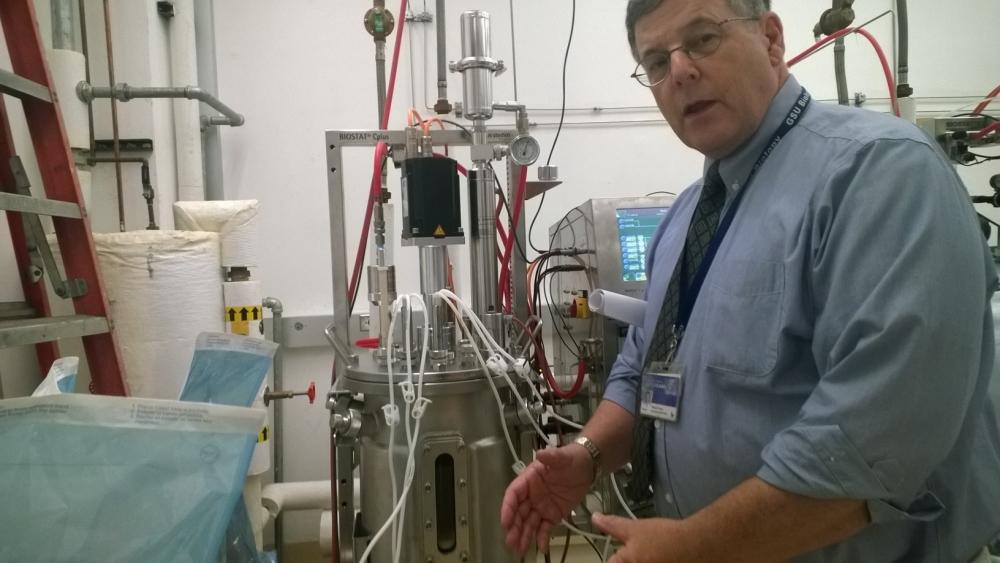 Four years ago, researchers at Georgia State met with U.S. Army officials. The military wanted their help fighting a host of infectious diseases, including Ebola.

Microbiology Professor George Pierce is one of the researchers who met with the Army. He says, at the time, he and his team’s focus was on flu vaccine research.

But four months ago, the speed and focus of their research changed. That’s when Ebola broke out again in West Africa. Pierce says this outbreak of Ebola is more widespread and is causing more concern. The geography of the disease, Pierce added, has also shifted.

“I think most people in the United States and Canada never gave a thought to Ebola," he said. "It’s a disease of Africa. It wasn’t coming here.”

All of that changed this month when two aid workers infected with Ebola were flown from West Africa to Atlanta for treatment at Emory.

Inside the Georgia State University lab in downtown Atlanta, Pierce and his team are experimenting with fusion proteins, a method that differs from other vaccine techniques. The small room is packed with stainless steel fermentation equipment that wouldn’t be out of place at a brewery.

For the scientists here, it’s not only the vaccine. It’s the know-how and the equipment. As fermentation specialists, they know how to configure the right equipment and the right lab conditions.

Pierce’s colleague, professor Sid Crow, says that know-how is what Georgia State is contributing to the Ebola puzzle.

“It’s looking at the application of the technology, which is our area,” said Crow. “The instruments and the technology to create the DNA constructs and get it into the organisms and get it expressed and produce a protein, which has activity. And you can say, 'This is the protein we wanted this organism to express.' It’s that whole picture. And I think that’s frequently the thing that’s missing.”

Seeing the Ebola patients being treated in Atlanta helps to validate the Georgia State scientists along with their colleagues at Emory and the Centers for Disease Control and Prevention.

But in other ways, it’s just the beginning of another scientific puzzle for Georgia State and Emory University Hospital. Emory has a specially-designed isolation unit to treat Ebola.

“Then the big question is, Ok you’ve got this facility that you run in Atlanta,” said Pierce. “Can you now translate that facility and put it on a boat and plane and run it anywhere you want in the world? That’s the next question. And how do you train people to run in this facility?”

But before that question can be answered -- they admit that no animal or human testing has been done on the vaccine. And that it may only work against a related disease called Marburg. But they are hopeful.

Pierce said scientists take research like this day by day.

"You have to be almost manic depressive to do it," he said with a laugh. "There will be good days when you really find something. But then you know the next day will probably be a bad day."

Pierce and Crow say it’s likely that a combination of drugs may be used either as vaccines to prevent Ebola or as medicines to treat it. That means their research may merely contribute to a larger final result.

“At this point, we just take satisfaction being part of the team trying to address a real problem disease,” Pierce said.

For scientists trying to find cures to the world’s most dangerous viruses, it’s a good team to be on.