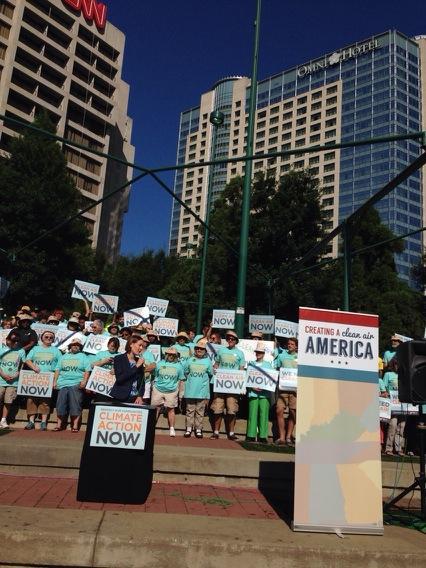 People from all over the country gathered in downtown Atlanta to give public comments at hearings that could have a huge impact on the EPA’s new Clean Power Plan.

The Environmental Protection Agency released the plan last month, which calls for a 30 percent reduction in carbon emissions by 2030. Under the plan, the EPA will set individual state-by-state carbon emissions goals. Opponents of the plan say it will hurt the economy and punishes energy industry workers.

Rep. Chuck Martin, R- Alpharetta, was one of the first people to speak at the Atlanta hearings on Tuesday at the Omni Hotel. He does not support the plan because he fears it is unrealistic and will hurt the entire economy.

“Ladies and gentlemen, if coal comes off the trains, all the other products that ride on the trains are going to get more expensive in your department store, in your grocery store,” said Martin. “If you don’t believe that that will have a negative impact on the economy, then we just differ.”

State Representative Mike Dudgeon, R- Johns Creek, spoke just a few blocks away from the hearings at a rally hosted by Americans For Prosperity.

“This is not about solar versus coal versus green. It’s about common sense and it’s about the economy,” said Dudgeon to a crowd of people wearing "Stop The EPA" t-shirts.

Among them was Claire Harrison, who lives in Alpharetta. She says the EPA’s plans could hurt more than help.

“The quality of our air and water is very, very high,” said Harrison. “I think in this hurting economy when we have negative economy growth this last period, people don’t know how they’re going pay their next energy bill, much less it going up 30 percent.”

The EPA plan, however, outlines that improved efficiency will cut energy costs by eight percent over the next 16 years. The agency also reports the reduction in carbon emissions from coal-powered plants will improve air quality, cutting down on asthma and other chronic health conditions. The EPA estimates that could lead to climate and health benefits of 55 to 93 billion dollars in the year 2030.

Mary Anne Hitt is the director of the Sierra Club's Beyond Coal campaign. She and dozens of others rallied at Centennial Park in support of the plan.

“We know that climate disruption and air pollution threaten our kids today and cast a very long, dark shadow over their future,” Hitt told the crowd.

Karen Grainey stood directly behind Hitt at the rally with a "Savannah Clean Energy" sign. The chair of the Savannah Sierra Club, she and 50 other people from the Chatham area boarded a bus to be at the hearings and show their support for the plan. Grainey says people who live on the state's barrier islands are particularly susceptible to pollution driven climate change.

“We’re a vulnerable population because of the increase in storm activity, hurricanes, flooding, sea level rise,” said Grainey. “We’re really at the front line of all of those problems and so, if you live on the coast, this should be concerning to you.”