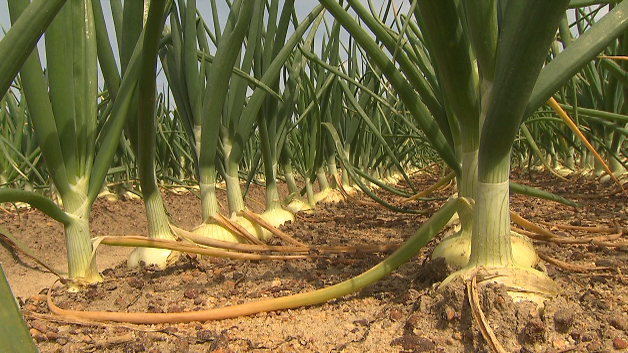 Vidalia onion growers can legally pack and ship onions this week. But so far the state’s agriculture commissioner doesn’t appear to be doing anything to punish a Georgia grower who admits to packing ahead of that date.

Known as the sweetest onion around, the Vidalia onion is a Georgia agricultural staple that can’t be grown anywhere else in the world. But recently, conversation about this unique Georgia vegetable has turned sour. A race to grocery store shelves has, in some cases, pushed quality standards out the door.

That’s according to Gary Black, the Georgia Commissioner of Agriculture. He issued a new rule prohibiting all farmers in the 20-county growing region from packing the onions to ship before April 21st this year, regardless of grading by federal inspectors.

“This issue is about ensuring the integrity of the trademark with consumer,” said Black. “Not just in Georgia but all over the world. Consumers that enjoy these. It's our state vegetable and we've got to stand behind it.”

He is referring to last year’s Vidalia onion harvest, which produced some immature onions that went to market.

“There were onions that were dug from the ground on the 28th day of March last year. That's way, way too early. It's way too early from what the seed companies would recommend,” said Black.

A push to be the first on the market has led to what the majority of Vidalia onion farmers, like Walt Dasher of G & R Farms, see as unfair practices.

For example , said Dash, a situation could arise where farmers could chose to enhance their growing methods in order to hit the market and start selling onions first.

Delbert Bland of Bland Farms disagrees. He says being the first to market is important for locking in deals with retailers.

“I am not for government dictating what date we can ship on and set it a year in advance. That's impossible. You can't decide in Atlanta when you're ready to dig onions in Vidalia,” said Bland. “ If you can imagine, I've got to sit here and not ship onions for a week, even if they're ready and mature to ship.

Bland brought legal action against Commissioner Black for what he deemed to be overstepping his authority with the new regulation.

“I think the biggest thing is that it makes us look like a bunch of fools that we can't decide what the law is and that the judge says one thing and the commissioner says another -it's ridiculous,” said Black. “ I only want to ship the very best Vidalia onions that are mature and ready to ship. But when I do that, I don't want some cat in Atlanta or Washington or anywhere else telling me you can or you can't.”

So, how can you tell when the onions are ready for picking?

“We typically go by when you begin to see the tops collapse over on them,” says Dasher.

Low sulfur content in the soil and surface water make those twenty South Georgia counties a hotbed for the Vidalia. For an industry raking in over $120 million per year, preservation of the brand is essential.

“It basically created another onion industry so to speak with all the jobs and the economic impact it has just in the state of Georgia,” Dasher said.

Commissioner Black says methods for determining yearly packing and shipping dates are extremely thorough and the date itself is flexible.

“If the science varies out then that can be changed,” said Black.

An unsuccessful attempt in court to override the commissioner’s ruling did not stop Delbert Bland from packing and shipping his onions last week, risking thousands of dollars in fines.

But as the hot commodity hits shelves this week from all Vidalia onion growers, it’s the consumers that will have the last word.