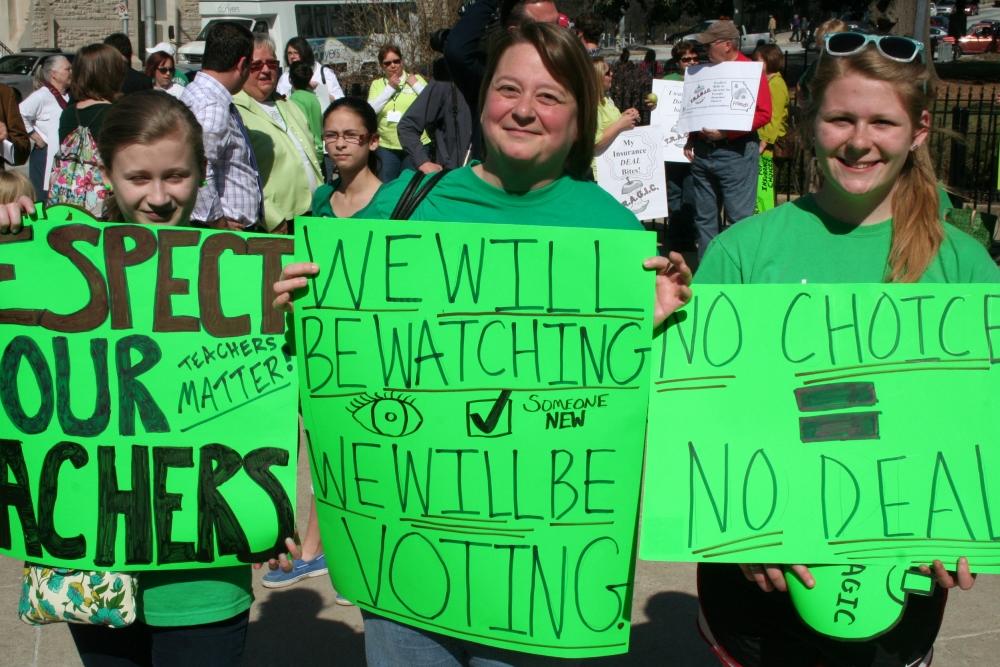 State officials said Tuesday that they plan to increase the number of insurers and health plan options for state employees and teachers next year.

The State Health Benefit Plan (SHBP) has been a target of fierce criticism since Jan. 1. That’s when changes to its benefit design, plus the use of just one insurer, sparked widespread complaints about a lack of choice of insurance plans and higher health care costs.

Now, though, the Department of Community Health is asking for proposals for a second statewide insurer to offer a high-deductible health plan, a Medicare Advantage plan for retirees, and a statewide HMO.

The current single insurer for SHBP, Blue Cross and Blue Shield of Georgia, would retain its health reimbursement arrangement plans and Medicare Advantage plans, plus add a statewide HMO option for the 2015 plan year. A third insurer would offer a fully insured in-network-only option for metro Atlanta, under the Community Health plan.

“SHBP is looking to enhance member choice in the 2015 plan year,” said DCH Commissioner Clyde Reese in a statement

The State Health Benefit Plan covers 650,000 state employees, teachers, other school personnel, retirees and dependents. With those numbers, the plan’s members can be a political force in an election year such as this one. When many of them began to complain about this year’s plan, and some began to organize, the state moved swiftly to amend it.

Educator groups praised the state’s plan for next year. Tracey Nelson, director of government relations for the Georgia Association of Educators, said, “We are pleased the see that the Department of Community Health has heard the concerns of teachers and other state employees and has decided to allow more company and plan options.”

Tim Callahan of the Professional Association of Educators said, “It seems promising that there will be multiple vendors and choice in plans. Perhaps some input from the affected employees is starting to be heard.”

“It’s a shame that it took a significant uprising and an election year to get policymakers and the governor to listen to the insured,’’ Callahan added. “We certainly hope that it doesn’t revert to ‘business as usual’ after November.”

Community Health plans to announce the selected insurers on July 1 for the 2015 plan year.

A teacher will participate as a member of the evaluation team, the agency said. Gov. Nathan Deal signed an executive order Tuesday that requires Community Health to include a teacher representative in the State Health Benefit Plan proposals process.

SHBP member input has been an area of concern for legislators and teachers. This year, State Sen. Josh McKoon (R-Columbus) proposed legislation mandating that at least two members of the Community Health board be members of the state health plan, but his bill failed to clear the General Assembly.

The Jan. 1 changes prompted the creation of a Facebook group of teachers, state employees and retirees that grew to thousands of members. Ashley Cline, founder of the group, called Teachers Rally to Advocate for Georgia Insurance Choices (TRAGIC), said state officials chose budget savings over the welfare of state employees with the health plan changes.

“We are hurting, we are angry, we are not going away, and we deserve to be able to take care of our own families while serving the families of Georgians in a variety of occupations,’’ said Cline, the wife of a Cherokee County teacher, at a February rally at the state Capitol. Therapy visits for the couple’s daughter cost much more under the Jan. 1 changes, she said.

In the face of this criticism, the board of the Department of Community Health, which approved the original plan that caused so much controversy, took quick action. In late January, it called a special meeting and approved a plan to replace co-insurance — a patient paying a percentage of the costs of a health service — with a co-pay system for medical services and prescription drugs.

Cline said Tuesday of the proposed changes for next year, “Offering teachers, retirees, state employees and their families more coverage and provider options in 2015 is a step in the right direction. However, it is imperative that this is a trend that continues in 2015 and beyond — not just during an election year.”

The 2015 plan designs and member rates will be presented to and voted on by the Board of Community Health this August, the agency said Tuesday. Open enrollment will be held in the fall.