Remembering The Temple Bombing And How It Changed Atlanta's Jewish Community 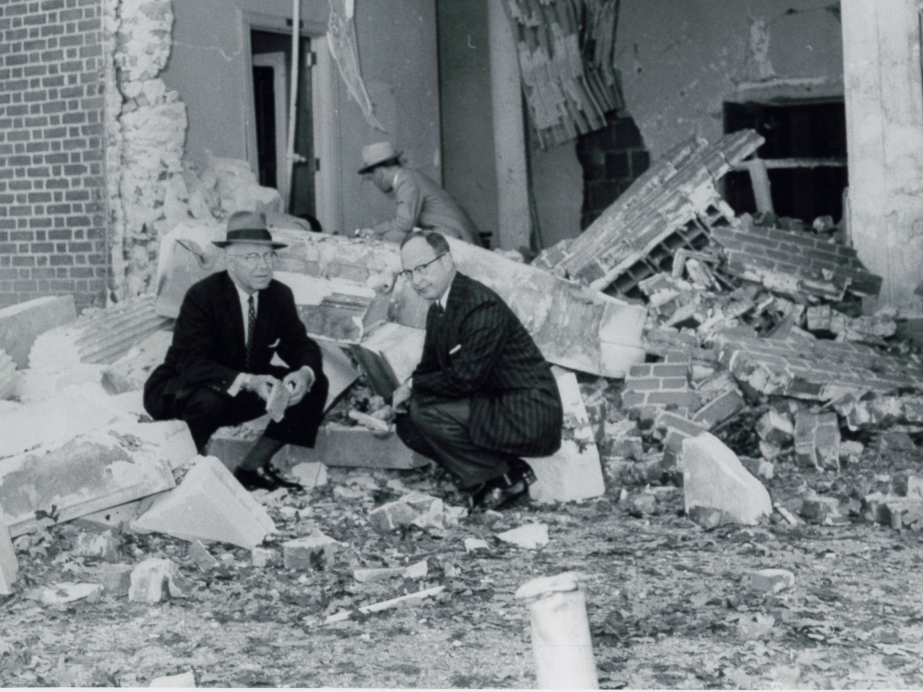 A new series beginning Tuesday, March 25 on GPB TV chronicles the history of Jewish people and their impact on the world. The PBS series The Story of the Jews traces 300 years of Jewish history, art, and culture.

GPB will bring that series closer to home with an hour-long look at Jewish influence here in the South, focusing on one of the seminal moments for Georgia Jews: the Atlanta Temple bombing.

It was October 12, 1958, when 50 sticks of dynamite exploded at the Hebrew Benevolent Congregation on Peachtree Street--what was widely called “the Temple.”

“Atlanta has always been a lighthouse of racial and religious tolerance in the South,” said William B. Hartsfield, Atlanta’s mayor, in televised remarks hours after the explosion. “We are shocked and amazed that this awful thing could happen in our midst.”

The bombing was the work of white supremacists and anti-Semitic hate groups. The Temple’s leader, Rabbi Jacob Rothschild, was a staunch ally of Dr. Martin Luther King Jr., and he used his pulpit to advocate for social justice.

“We were asleep. We were awakened about 7:15 by the custodian of the temple in tears, having discovered the hole in the wall and the devastation,” said Janice Rothschild Blumberg in a recent interview with GPB.

Even after the violence, Blumberg says she never questioned her husband’s public support for civil rights or social justice, despite threats to their own lives.

“Only once was I afraid, and that was the night after the bombing when we tried to go to sleep,” Blumberg said. “Our home had been threatened. Someone had called and said there was a bomb under the house.”

Even though both the police and FBI searched the house to make sure it was safe, Blumberg was still afraid she wouldn’t wake up.

“There was no way I was going to let the children spend the night in our house,” Blumberg said. “But, you know, you wake up the next morning, you do what you’ve got to do, and you forget about it.”

Blumberg says Rabbi Rothschild would scour newspapers for reports of injustices to work into his sermons. It was his way of bringing his message to life.

She said she was amazed what he could dig out of the back pages of the papers: stories of racial and ethnic crimes from all over the South that were otherwise hidden from an Atlanta congregation that didn’t always see them in their daily lives.

Blumberg recalled one story her husband found about a University System of Georgia meeting in Milledgeville. Three African-American presidents of segregated colleges also attended. Blumberg said they were not allowed to be housed in same the dormitory or fed with the other people.

That wasn’t enough for some.

“These presidents of colleges, it so infuriated the [Ku Klux] Klan and other people that they were run out of town for having dared to sit at the same conference table,” Blumberg said. “That’s how bad things were.”

Blumberg said they didn’t see that kind of violence in Atlanta until the bombing. But afterward, the city found itself at the center of the intensifying American civil rights movement. And Blumberg said the change was palpable.

“It was like lancing the boil in the Jewish community that had been dealing with the Leo Frank case all of those years. It enabled them to feel more comfortable because the general community was so all-embracing,” Blumberg said. “Atlanta just rose up and said, in effect, ‘You can’t do that to a church in our city, even if the church is a synagogue.’

“[Rabbi Rothschild] used to say that it broke the hole in the wall of silence, both in Georgia and nationally”

Janice Rothchild Blumberg will appear March 25 on GPB TV’s On the Story where she will talk more about the bombing and about activism and social justice in Georgia’s Jewish community.