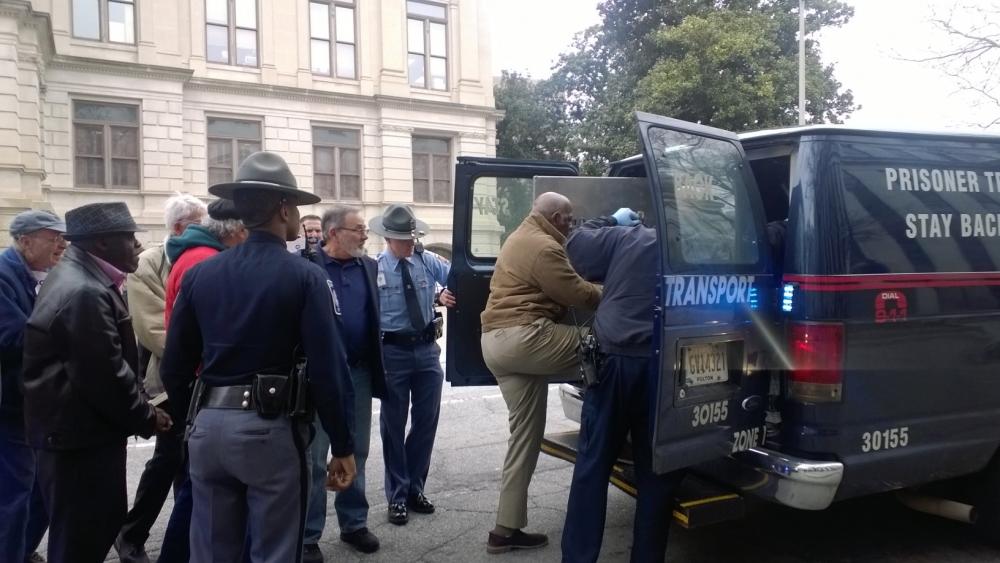 The second-to-the-last day of the 2014 state legislative session kicked off with protests in the Senate gallery over Georgia’s decision not to expand Medicaid. The disruption was part of a rolling series of civil disobedience acts to urge lawmakers to expand Medicaid and defeat a bill that would bar a sitting governor from adding enrollees to Medicaid.

The protests included blocking Gov. Nathan Deal’s office and resulted in the arrests of about three dozen people, including the pastor of Ebenezer Baptist Church in Atlanta. Ultimately, they failed to convince lawmakers in the Senate who passed the bill shortly before 9 p.m. Tuesday night.

Under the Affordable Care Act, the federal government would initially pick up the entire cost of expansion. But Republicans say politicians in Washington will eventually leave Georgia picking up all or most of the costs.

Gov. Deal has not only refused to expand Medicaid, he also backs the bill stripping his office of the power to do so.

The protests started the day off with a bang and underscored the primacy of a handful of issues making news during this quick legislative session, which ends Thursday. Georgia legislators presided over a marathon day of lawmaking in which they passed sweeping bills involving abortion, Medicaid, healthcare and guns.

The bill to block Medicaid expansion was arguably the most controversial bill lawmakers passed on Tuesday. Sen. Steve Henson, a Tucker Democrat, said he was "shocked and disappointed" by the bill and that lawmakers have "an obligation to look at the wider impact" of the measure.

But Sen. John Albers, a Roswell Republican, referenced the crux of GOP opposition to Medicaid expansion: Georgia will incur costs after 2016 when the federal government will no longer pay the full costs of new enrollees.

Lawmakers in both chambers also passed a measure that would ban abortion coverage in many healthcare plans sold in Georgia. The House also passed a bill that would create a two-year pilot program privatizing parts of the state's foster care system. The measure would also create a study committee to explore further privatization.

And both chambers passed the 2015 budget. Often, lawmakers wait until the final week of the session to pass the following year’s spending plan, even though it’s their only constitutional obligation.

“There is nothing now keeping us here,” House Speaker David Ralston told his colleagues. “The budget is done, the one thing we have to do. We will take up a few other measures and see what happens.”

Alan Essig, with the nonprofit Georgia Budget and Policy Institute, said the $20.8 billion spending plan is nearly identical to what the Governor had requested at the start of the session.

“Most years, the Governor gets 95 percent of what he wants,” Essig said. “This year, he got 99 percent.”

Georgia’s Governor is one of the few with the power to veto budget line items.

The state Senate also voted on one of two measures that would expand where people can carry guns in Georgia.

Larry Pellegrini is a lobbyist with a coalition of groups against the gun measures. He says two bills under consideration would allow gun-owners the right to carry firearms in some government buildings. And anyone who believed a municipality wrongly abridged gun rights could sue.

“So a person might think he should be able to enter the annex of a courthouse when that may not actually be an area where [guns] are allowed,” he said in an interview. “But the confusion of the bill sounding like guns everywhere -- but maybe not -- means they’re going to challenge that.”

As a result, many towns and cities oppose the bill. So do some law enforcement groups. The bills would also loosen restrictions on carrying guns in bars and churches.

“A lot of the pastors who came to the Capitol in support of the bill are from my district,” he said. “Us pro-gun bill people want a good, strong gun bill.”

After holding off on a vote, lawmakers gave final passage to a bill that would bar state agencies from carrying out any of the mandates of the Affordable Care Act.

The Senate originally did not put it on its calendar, which caused its sponsor, Rep. Jason Spencer, to protest the exclusion. On Tuesday, he called a press conference to say he was making progress behind the scenes to force a vote in the Senate. And late Tuesday night, the House tacked it onto another bill.

It's now headed to the Governor's desk for his signature.

Fear Vs. Money In Politics

Many groups oppose the measure, including the consumer group Georgia Watch, which says the bill would block Georgians access to more healthcare options.

Just as many groups support the bill. Debbie Dooley is a member of the Tea Party and a key figure in the movement opposing so-called Obamacare. She said she sent an email to 200,000 Georgians Monday night urging them to pressure Gov. Deal to intervene and convince the state Senate to take up the bill.

And that may have been a big factor in influencing lawmakers in the House to act on their own.

Lawmakers expect to gavel out the 2014 session on Thursday. They will spend much of the last day of the session voting on whether to agree with changes made on bills in the other chamber. That’s guaranteed to create a few sparks so stay tuned.