House And Senate At Odds Over Key Bills 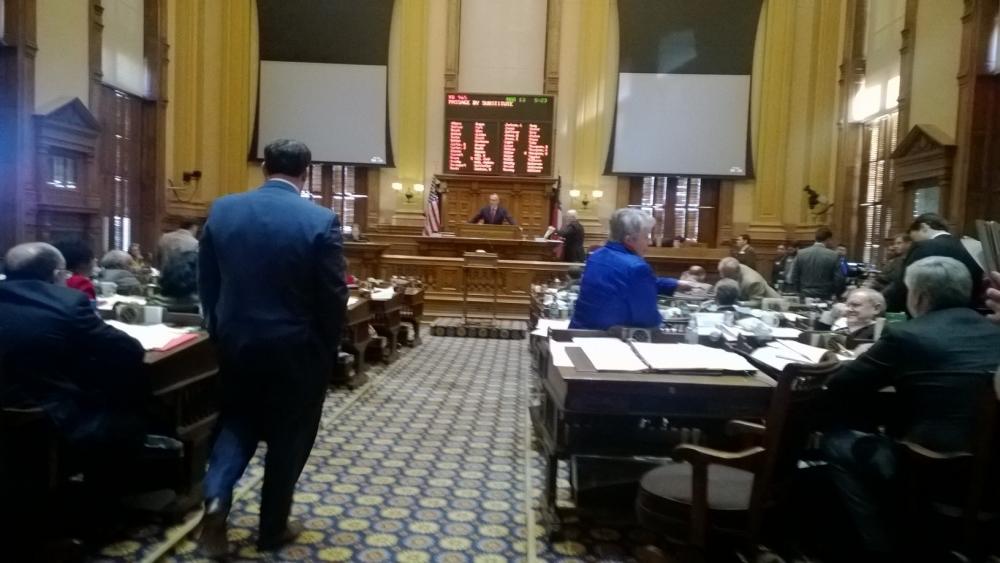 We told you Thursday that the pace of business at the State Capitol had quickened. That’s especially true in the scramble to push through controversial measures.

Lawmakers are grafting parts of those bills onto other pieces of legislation that would otherwise not draw much opposition.

Case in point: Thursday afternoon, the House was about to vote on a bill to expand services to Alzheimer’s patients. Then, Atlanta Republican Rep. Ed Lindsey, arrived with an amendment that would block state agencies from carrying out any of the mandates of the Affordable Care Act.

A similar measure had passed committee Thursday morning but its sponsor, Rep. Jason Spencer, a Republican, told reporters the maneuver was “an insurance policy.” That is, to insure Georgia opposes the federal healthcare reform bill every way it can.

“We’ve voted on that two or three times,” said Debbie Buckner, a Junction City Democrat. “This year isn’t about the issues as much as posturing for the elections.”

Bills are also moving back and forth between the chambers. A bill that has passed one chamber may win passage in the other chamber but with an amendment. The bill then goes back to the original chamber, where lawmakers have to decide whether to “agree” or “disagree” to the change.

Add on top of all that activity a temporary work stoppage in the Senate Thursday afternoon because of behind-the-scenes infighting and you have the recipe for political chaos at the State Capitol.

The Senate had set a long agenda for itself Thursday, with a calendar of 22 bills. The leaders in that chamber, however, decided in the early afternoon not to vote on any House measures to protest that chamber’s failure to vote on some Senate measures.

House Speaker David Ralston expressed his displeasure to his colleagues at a meeting of the committee that sets the calendar each day.

“The hour is getting late,” he said. “Maybe our friends [in the Senate] will spend some time and go back and re-think their positions on House measures. There are a lot of things that need to be done.”

The Blue Ridge Republican added, “It’s too late to be cute.”

So What’s The Status Of the Major Bills?

With such shenanigans, it can be difficult to parse the status of the major pieces of legislation. But your GPB News Now correspondent will do her best.

Most of the session's major bills have passed one chamber, and some have passed both chambers. But since they’ve been amended, the measures need to be reconciled before heading to Gov. Nathan Deal for his signature.

“They’re in limbo,” said Tom Crawford edits the Georgia Report, an online political digest. “Start with the budget and work your way down.”

And that’s just what we will do.

*The 2015 budget: It’s the most important measure and, in the words of one Democrat, it’s being held hostage right now. The spending plan has passed the House and the Senate but each chamber has made small changes that the other chamber needs to sign off on. As a result, the budget is in an ongoing conference committee that probably won’t resolve its differences until the end of Day 40, scheduled for Thursday, March 20.

*Gun bill: There are now two bills but neither has gained final passage. Republican members of the House maneuvered earlier this week to change a minor Senate gun bill allowing judges to carry firearms to include provisions of a much more sweeping second amendment measure. The newly-transformed bill would allow licensed gun-owners to take firearms into bars, schools and churches with some restrictions. It can be called up in the Senate at any moment for an “agree” or a “disagree” but so far that’s not happened.

Another gun bill passed a Senate committee Thursday morning, but made changes that Rep. Alan Powell, one of the bill’s sponsors, said probably won’t pass muster in the House. But the Hartwell Republican said he’s confident the Senate will vote on the second bill.

*Medicaid Expansion: A bill that would bar a sitting governor from expanding Medicaid has passed the House but not the Senate. State Senator Jason Carter has derided Gov. Deal, his opponent in the gubernatorial race, for backing a bill that would diminish executive power. Most of the language in the bill has also been attached to another measure that would privatize parts of the state’s foster care system. That may complicate its passage.

*Anti-Obamacare: There are several bills that attack the ACA from different angles. But Rep. Spencer’s measure, mentioned above, is the one that would dismantle the healthcare reform bill in Georgia the most. And as we mentioned, parts of his bill were attached to a measure that would expand services to people suffering from Alzheimer’s disease.

Legislators aren’t in session on Friday or Monday. But the Senate still has to vote on many House measures, and the committee that decides what bills come to the floor will meet for the last time on Monday to set the calendar.

Lawmakers will only be convening two days next week: Day 39 on Tuesday and the final day, Day 40 on Thursday.

Judging from the scorecard above, those will be two long days.