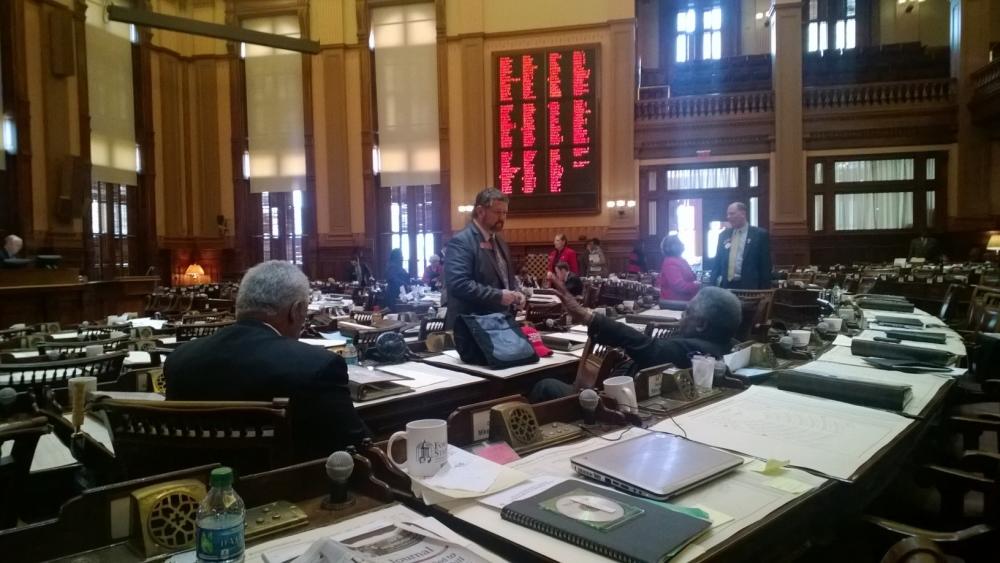 Important bills are beginning to come to the floors of both chambers at the state Capitol, and the pace of business is picking up. Of course, there are only three legislative days left in this year’s session so it’s about time.

Votes were taken Wednesday on three key bills, including one that would place a monument to the Ten Commandments at the state Capitol, despite a warning that it could bring a legal challenge.

And legislative committees are working over-time to pass bills. In fact, late Wednesday afternoon, a Senate committee approved the medical marijuana bill, which would legalize the use of cannabis oil for a rare seizure disorder. Another committee approved a bill expanding the rights of licensed gun-owners.

And the Senate won’t convene until 1 p.m. Thursday so committees can work their way through legislation, including a controversial measure that would prevent a sitting Governor from expanding Medicaid.

There was still time Wednesday morning to play game tape from Aaron Murray’s top moments as a University of Georgia football player. But it’s apparent that the Capitol is winding down by a few key indicators.

First of all, lawmakers are striking compromises (see more about that below on the Flint River Bill, which passed the House Wednesday). And legislators desperate to see the other chamber pass their bills are taking walks across the Capitol to check in on their colleagues.

For example, Rep. Alan Powell, a Hartwell Republican who’s trying to force a vote on a second gun bill, visited the Senate Wednesday morning. His colleagues there might have been shooting themselves in the foot but they weren’t voting on the measure he altered Tuesday to pave the way for guns in some churches, bars and schools. (That measure is apparently also known, according to Sen. Vincent Fort, an Atlanta Democrat, as the “guns everywhere" bill.)

But let’s talk about what did happen Wednesday. And that’s compromise in the House on a bill that environmentalists feared would re-write water law in Georgia. Ostensibly, the bill is aimed at protecting endangered species in minor bodies of water in Southwest Georgia. Before the re-write, opponents said it would have given state officials new power to freeze water permits in time of extreme drought. That would have meant that a farmer in Southwest Georgia might have had the right to irrigate his crops via his permit but the state would have said he couldn’t act on it.

And environmentalists feared the bill, backed by the business community, was really just a way to divert water to Florida to satisfy commitments in connection with the ongoing water wars. Using the Flint River basin, rather than the Chattahoochee, as the water source would have let Atlanta’s growth go unchecked.

After months of urging by the Sierra Club and a dozen other groups, the bill’s backers agreed to narrow the measure’s scope so that it only affects four creeks, and not the Flint River itself. And under an amendment, the state won’t be able to introduce large amounts of water into these streams [called ‘augmentation’] but can only intervene to guarantee minimum flows.

Debbie Buckner, a Junction City Democrat, said the bill immediately raised red flags for her because the state official who would have benefitted – the director of the Environmental Protection Division – said the measure wasn’t necessary. And she noted a keen interest in the bill on the part of Gov. Nathan Deal.

Supporters said the bill would help the state avoid litigation with federal agencies over the protection of endangered mussels in the streams.

“The amendments simply clarify what we’ve been saying all along that the sole purpose of augmentation is to take care of aquatic life endangered in the creeks,” said McCall said. “It’s not to flood Florida. It’s not to support Atlanta.”

MLK, The Ten Commandments And A Whole Lot More

The grounds of the state Capitol could get a little more crowded soon, with two bills the Senate passed Wednesday. One we’ve already mentioned – a second tribute to the Ten Commandments (the first is in the basement of the Capitol). The other bill would authorize a statue to the Rev. Martin Luther King Jr. on Capitol grounds.

The MLK statue movement has the backing of Gov. Deal, and it was more or less assured passage. But for many, it was a watershed moment. And yet, it was the other bill that took center stage.

The other bill, sponsored by Sen. John Albers, a Roswell Republican, might best be described as “more of the same.”

That’s because as Capitol insiders have noted, Alabama has already fought this battle. Indeed, Sen. Steve Henson, a Tucker Democrat and the Minority Leader, read out a portion of a letter from Georgia’s legislative counsel warning that the bill may be unconstitutional.

“When you see a letter by the legislative attorney that says it would probably not survive a challenge because of constitutional reasons, I think you should have some concerns,” said Henson.

The bill’s sponsor, Sen. John Albers, noted that no tax-payer funds will be used to erect the Ten Commandments, and he said the tribute will include other items that are part of the foundation of American jurisprudence.

The Senate will debate more than 20 bills on Thursday, including a measure that would loosen restrictions on who can administer overdose antidotes.

As we said, we have one more day of the session this week, and two next. And then we’re done – with lawmaking that is. The campaign season will soon begin in earnest in advance of the May 20 primaries.