Healthcare Navigators Feel Like They're Swimming Against The Tide 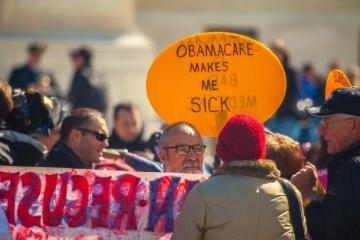 Back in December, with the deadline approaching for people to enroll for Jan. 1 coverage in the new insurance exchange, an event was scheduled to inform Greene County residents about the program.

The event was to feature a health insurance “navigator,” a person trained and licensed to inform people about the Affordable Care Act and guide them through exchange enrollment. This particular navigator, Kimberly Jenkins, was one of a dozen working under a federal grant to the University of Georgia.

Greene County would seem to be a promising venue for such an information session, since 19 percent of its residents have no health insurance. “A lot of people could benefit in this community,” said David Daniel Jr., the county’s extension agent for agriculture and natural resources.

But this particular gathering did not work out as planned.

Daniel said he tried to distribute flyers for the event in many locations — including a hospital, a drugstore and many medical offices — but the only place that agreed to put one up was the Greene County Public Library.

“I left them with a couple of doctors’ offices, but no one put them out,” Daniel said. “It’s kind of understandable. It’s still one of those issues that no one wants to touch. With things being the way they are now, everybody’s got to be politically correct. No one wants to go out on a limb to make it work or to help it work.”

And if that lack of response was not annoying enough, the session had to be called off at the last minute because Jenkins became ill. It has not been rescheduled so far.

Many people skeptical of Obamacare

The misfired effort in Greene County was partly a matter of bad luck, of course. But the whole incident seems to sum up the roadblocks that navigators face in Georgia. The ACA, also known as Obamacare, is complex and controversial. People who are trying to raise awareness about it are in an uphill battle.

The problems for the navigators began early, with the bungled October 2013 debut of healthcare.gov, the federal exchange website. Navigators were supposed to help people use the exchange, but most Americans could not get access to it. Repairs on the site took weeks.

At the same time, a controversy over policy cancellations led to a nationwide wave of bad publicity about the ACA in general. Many people became wary of having anything to do with Obamacare.

And in Georgia, members of the Republican-led political establishment have remained firmly opposed to the ACA. They fought the health law before it was passed, tried unsuccessfully to repeal it and supported legal challenges to it. In the General Assembly, GOP lawmakers are now seeking to bar the public state universities or colleges from helping to implement it. (That would appear to eliminate the UGA navigator program.)

Health and Human Services Secretary Kathleen Sebelius, visiting Atlanta on Monday, defended the navigator work, saying of the UGA program: “I can’t imagine a more important job than letting people know what the law says, and what their rights and benefits are.’’

Navigators themselves have become a focus of ACA opponents. Late last year, an ACA information session in Coweta County was the target of a protest by Georgians for Healthcare Freedom and the Coweta Tea Party. Some protesters carried signs reading “Navigators get out.”

Though the Coweta demonstrators were few in number and peaceful, the safety of navigators is a top concern, said Sheri Worthy, the principal investigator for the grant that funds the UGA navigator program. Since the protest, the UGA faculty members who supervise the navigators posted in rural areas have decided to cut back on big, open events and concentrate on individual enrollment.

“We really refocused our efforts to work with individuals and doing small, focused events in trusted venues,” Worthy said last month during a presentation on the UGA campus.

All told, UGA’s 12 navigators have held 365 educational activities in communities throughout Georgia.

Enthusiasm for the mission

Jenkins, the navigator whose illness forced the cancellation of the Greene County public information session, said she is trying to reschedule it, and hopes to work next time with St. Mary’s Good Samaritan Hospital in Greensboro.

County official Daniel, who distributed flyers the last time, said he is still trying to determine the “most efficient way to get information out in a timely manner.” A newcomer who has been on the job for only seven months, he acknowledged that printed notices may not be the way to go.

Greene County resident Mary Miller said she gets most of her news from local newspapers such as The Breeze and Lake Oconee News. She said she did not hear any talk about the planned event in December and did not see any advertisements for it.

But she’s familiar with the ACA effort. “I’ve heard talk about it at work,” said Miller, a real estate agent who has insurance. “There’s certainly word around that they are trying to get people to sign up for it.”

Jenkins is responsible for disseminating health care information to about 100,000 people living in 12 of Georgia’s 159 counties. She tries to visit a county once or twice a week and devotes the rest of her time with to individual appointments with people trying to get insurance through healthcare.gov. An appointment typically lasts one hour as she walks the person through the application and answers any questions.

It’s a slow process, but Jenkins said she is making it work by visiting several counties in one day and spreading the word wherever people gather. She regularly attends churches in the community and enrolls people after services.

Becoming part of the existing “community system” is crucial to reaching rural people, according to Sharon Gibson, the cultural trainer for the navigators. She instructs navigators to work with the leaders in the community and the popular groups that already operate there.

The hostile response to the ACA, made worse by the implementation problems last fall, has been a hurdle for Jenkins. She said people are often skeptical until they see the premiums for health coverage.

“Once they see the prices associated with the claims, they are generally happier, so I urge them to do the application,” she said.

Georgians can sign up for health insurance until March 31, when 2014 enrollment closes. The navigators and extension agents are working to sign people up by the deadline. After that, they will continue to educate people about health insurance in general.

“It doesn’t matter who they are — white, black, Latino — people in rural communities are wary of change,” said Gibson. “There’s a lot of TV and radio and that’s confusing. A lot of what our navigators do is address misconceptions.”

Lindsey Cook is a senior at the University of Georgia, studying journalism, computer science and new media. She is an AP-Google scholar and her work has appeared in The Washington Post, The Atlanta Journal-Constitution and Online Athens.