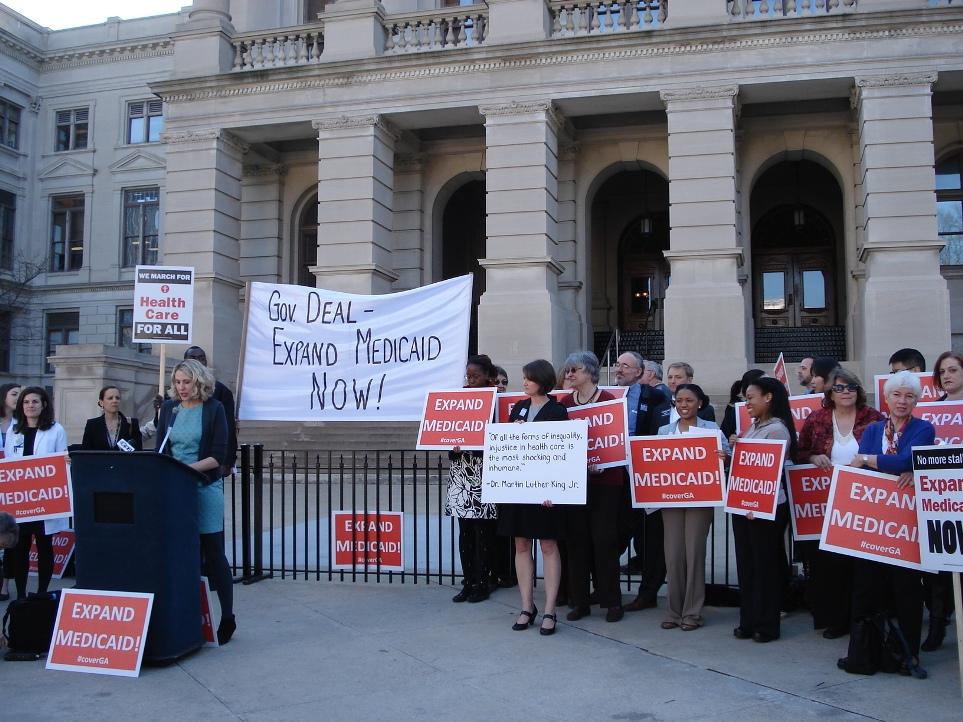 More than 38,000 Georgians signed up for coverage in the health insurance exchange in February, according to a federal report released Tuesday.

That is slightly down from the number that enrolled the previous month. But the February enrollees represent a 37 percent increase from the total Georgia enrollment of 101,276 through January.

The Georgia enrollment dip last month was part of a national decline from the previous month, the report showed. Federal officials made the point Tuesday that February is significantly shorter than January, and they said January had some spillover from December.

March 31 is the deadline for people to sign up for health coverage in the exchange. A person who remains uninsured past that date is subject to a financial penalty under the Affordable Care Act.

The Georgia enrollment of 139,371 through February was behind that of two other states using the federal exchange that have similar-sized populations – North Carolina’s 200,546 and Michigan’s 144,587. Georgia has trailed both in recent months.

But the Georgia figure for February still surpassed that of two states with larger populations, Ohio and Illinois.

As in previous months, the age of enrollees was a prime focus in the federal report. Twenty-seven percent of enrollees signing up nationally in February were ages 18 to 34, the same rate as was reported in January, said report from the Department of Health and Human Services.

The report says 28 percent of Georgia enrollees were in that age group.

For the exchange to work and be economically viable for insurers, it must have enough young and healthy enrollees to balance the risk from older and sicker enrollees, experts say. That’s why people 18 to 34 are such an important demographic for the program. Though age is not a precise indicator of health, younger adults tend to be healthier than older ones.

Young adults tend to sign up late in the enrollment process, said Kathleen Sebelius, the U.S. secretary of Health and Human Services, when she spoke to the media Tuesday.

Yet Brendan Buck, spokesman for U.S. House Speaker John Boehner (R-Ohio), said the young adult number was a bad indicator for the program.

“It seems the president’s push to enroll young adults is far too little, too late,” said Buck, according to Kaiser Health News. “Young adults – those who the White House repeatedly said are critical – are deciding the health care law is a bad deal.”

Nationally, enrollment in insurance exchanges has reached a total of 4.2 million. That’s significantly below the original estimate of 7 million new customers from the Congressional Budget Office. And it’s also short of the 6 million enrollees that Vice President Joe Biden recently set as a revised target for signing up people before April.

“Now, during this final month of open enrollment, our message to the American people is this: You still have time to get covered, but you’ll want to sign up today – the deadline is March 31,’’ Sebelius said.

Federal officials are mobilizing in an effort for more sign-ups as that date nears. Sebelius visit to Atlanta on Monday was part of the push for enrollment in the exchange.

Sebelius, in talking to the media Monday at the Center for Black Women’s Wellness in Atlanta, made a pitch for African-Americans to enroll. She also urged the state to expand its Medicaid program. (Here’s a link to the GHN article on her visit.)

The federal report showed that 58 percent of sign-ups in Georgia are females, higher than the national average of 55 percent. And 85 percent of enrollees in the state have qualified for subsidies to help them afford coverage.

The federal report found that more than 62,000 Georgians appear to be eligible for the Medicaid and PeachCare programs, up from 51,531 at the end of January. But there’s a snag in enrolling these people in the two government programs. (Here’s a GHN article on this issue.)

Bill Custer, a health insurance expert at Georgia State University, said the Georgia enrollment numbers “are pretty much in line with what you’d expect, given the problems we had in October and November’’ with the healthcare.gov website. The site malfunctioned during its early weeks, limiting enrollment.

The political atmosphere plays a role in states’ enrollment figures, Custer said. He noted that the insurance commissioner in North Carolina promoted the coverage. In Georgia, Insurance Commissioner Ralph Hudgens has been a staunch opponent of the law.

Still, Dante McKay of the Get Covered America campaign said he was encouraged by the numbers. “As more Georgians learn that financial assistance is available, we are experiencing larger event attendance numbers and remain confident that enrollment will only accelerate as we close in on the deadline,’’ McKay said in a statement.

The federal report comes as the debate over the Affordable Care Act continues to percolate in Georgia.

A bill in the Republican-controlled General Assembly would require legislative approval for any expansion of the state’s Medicaid program, and it appears to be heading for passage.

Gov. Nathan Deal, who currently is the deciding authority on Medicaid expansion, is just as opposed to it as are his fellow Republicans. He has consistently rejected Democrats’ calls for expansion, citing the costs to the state.

Another GOP bill would restrict state employees from advocating for expansion and would bar the state from starting its own health insurance exchange. The federal government now runs the Georgia exchange and those in a number of others.