Here Are The Georgia Bills To Watch In 2014 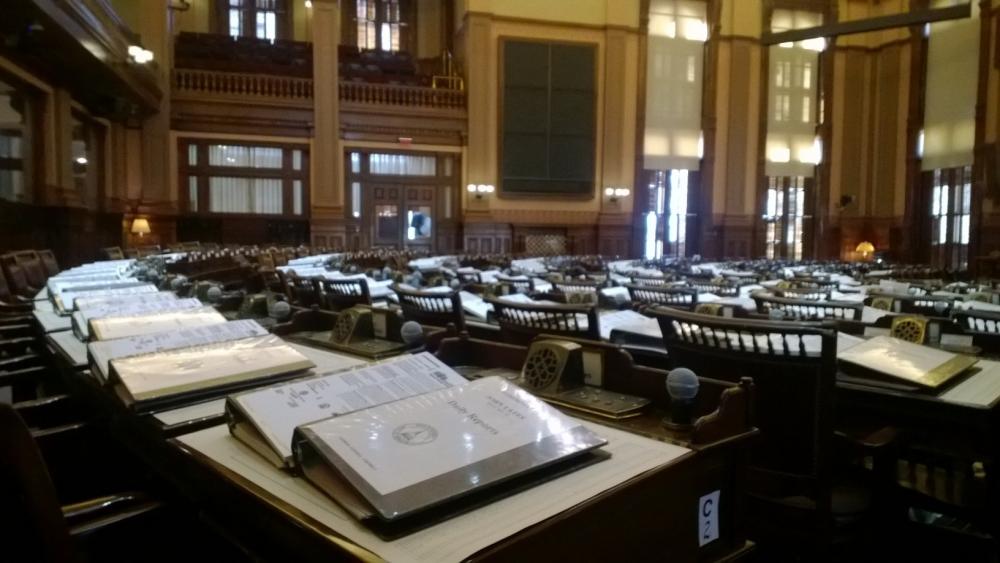 Georgia lawmakers are sprinting to the end of the 2014 legislative session.

The legislature engaged in a bill-passing marathon Monday, and now each chamber is taking a look at the other chamber’s bills.

Among the hundreds of measures that have a chance at passage into law this year, one proposal would place a monument to the Ten Commandments in a prominent spot at the Capitol. Another would bar the state from levying ad valorem taxes. There’s also a bill adding a high deductible option to the state employee healthcare plan.

But which ones are the biggies?

Lots Of Bills But Only A Few Count

And here's a list of important bills that passed Monday:

*Medical Marijuana: On the House side, lawmakers passed a bill that would legalize medical marijuana for treatment of a rare and disabling seizure disorder. Some lawmakers have voiced opposition because the cannabis oil in question is an untested drug that’s not approved for this use by the Food and Drug Administration.

*The Federal Abortion Mandate Opt-Out: the Senate passed a bill that would nix coverage of abortion under the state employee healthcare plan or any plan purchased through a state healthcare exchange under the Affordable Care Act.

*Medicaid Expansion: the House passed a measure that would strip the Governor’s office of the power to expand Medicaid rolls.

*The Georgia Health Care Freedom and ACA Noncompliance: the House passed a bill that would block the local implementation of the Affordable Healthcare Act. That means no state agency could use its resources to carry out any of the mandates in the federal healthcare reform law.

*Welfare recipient drug-testing: the House passed a bill that would require applicants for welfare to take a drug test to receive the benefits. A similar law is already on the books in Georgia, but has been held up by the courts. This bill will tempt a constitutional challenge if it passes and that makes it important with a capital I.

What’s So Important About These Bills?

Do you notice a pattern? Most of the top bills this year relate to healthcare.

“Healthcare is a big issue,” said Tim Sweeney, a healthcare policy analyst for the Georgia Budget and Policy Institute. “It’s a big part of the economy. “

In an interview Tuesday, he continued, “It’s a big issue for individuals. People who don’t have access to healthcare coverage want to get it. People who have coverage want to protect access to the health services they want. And as we’ve seen over the last few years, any changes to the healthcare system can spur lots of passion because it’s so personal and it’s so connected to us.”

Of course that’s in part because this is an election year. And Republicans oppose the ACA almost more than anything else. And the most active part of the GOP electorate wants to see it blocked in Georgia. That means it’s good politics to keep up a steady diet of bills to defund, dethrone and dilute the federal healthcare reform. And all of it despite a ruling from the U.S. Supreme Court upholding most of the law.

“Clearly that issue is being decided at federal level, but there are some state legislators that have found some ways they believe they can influence [the issue] as well as show their constituents that they are trying to do what they want done,” said Charlie Harper, a right-leaning policy advisor.

But there’s another thread here: sustainability. The GOP doesn’t see the federal healthcare reform law as a manageable economic load for years to come.

“You have to ask yourself, ‘What is sustainable?’” said Rep. Jeff Chapman in an interview Tuesday.

Chapman, a Brunswick Republican, voted in favor of stripping the Governor of the power to expand Medicaid. And he also backed barring state agencies from carrying out any of the mandates contained in the ACA.

But here’s something he didn’t vote for: the medical marijuana bill.

“I think we’re in over our heads and we are outside the realm of our expertise,” he said about the measure that would expand the authorized use of cannabis oil. “I was not convinced that this was the right thing for us to be involved in. I could be wrong and it passed.”

As for opposing the ACA, Chapman says you have to do more than just oppose it.

“You can’t just say no. You need to be responsible enough to offer a better choice,” he said. “That’s not what the public is hearing a lot about.”

A New Kind of Power Play

But the bill that might have the longer legacy is the one that gives the legislature the power to expand Medicaid.

And it’s also a bill that opens up a new legislative precedent.

The executive and legislative branches of government normally tussle over who gets more power. And Tom Crawford, who edits the Georgia Report, an online political digest, said normally a governor would veto a bill that stripped him of a particular authority.

“In this case, the head of the executive branch, Gov. Deal, doesn’t have a problem with the legislature taking that particular grant of authority so that makes it a bit unusual,” he said. “Generally a governor tries to hold onto as much power as he can while a legislature tries to get as much power as they can.”

That wrinkle is Georgia’s special stamp on the ACA conundrum.

As for the legislative session, Republicans hold pretty much all of the power so all of these measures have a good chance at final passage. The question will be, how does each chamber handle the pet projects of the other? Often times, people in the same party but different chambers don’t play nice after bills cross over. That’s in part due to a rivalry between the two houses of the legislature.

Slowing Down To Speed Up Later

Tuesday was a slow day at the Capitol. But Wednesday promises a little more action. The biggest pot-stirrer is likely to be a hearing on a bill that would restrict Georgia’s participation in the Common Core educational standards. The Senate passed it, and now the House gets to put the measure through its paces.

As one lobbyist put it, “There are hundreds of bills to look over each session. But it’s not serious until they cross over. And now they’ve crossed over.”