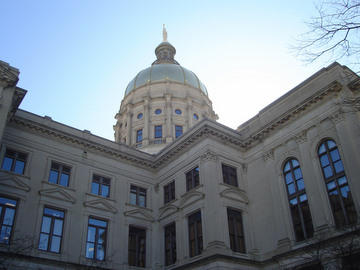 A state House panel Wednesday unanimously approved a bill that would permit medical marijuana to be grown and used in Georgia for treatment of patients with cancer, glaucoma and seizure disorders under tightly controlled restrictions.

The Health and Human Services Committee’s passage of the high-profile legislation paves the way for the full House to vote on the bill and, if approved, send it to the Senate for consideration.

Peake championed the legislation, called Haleigh’s Hope Act, after learning of the plight of 4-year-old Haleigh Cox of Monroe County. The girl suffers from epilepsy and endures as many as 100 seizures a day.

For children with conditions similar to Haleigh’s, a non-psychoactive marijuana derivative called cannabidiol (CBD) has been effective in significantly reducing the seizures. For many children it has proved to be the only treatment providing relief, parents have said.

After Thursday’s hearing, Peake gathered with parents who have aggressively supported the bill in hopes of getting access to CBD for their children. He told them this was a first step and he congratulated his colleagues on the House committee for moving the bill forward.

Committee Chair Sharon Cooper (R-Marietta) cautioned the parents during the hearing that even if HB 885 is enacted, the treatment will not be available to their children “overnight.”

Peake acknowledged as much, but told lawmakers, “The heart and intent is to find the best way for families in Georgia, in conjunction with their physicians, to get access [to the treatment.]”

The bill would authorize the Georgia Composite Medical Board to oversee the use of marijuana derivatives in a nonsmoking delivery system, such as an oil or pill form, for treatment of patients within an academic medical center research setting, under the direction of a physician.

The only conditions approved for treatment would be seizure disorders, glaucoma, and nausea associated with cancer chemotherapy and radiation.

The medical board would appoint a Patient Qualification Review Board to directly oversee development of the research programs and the patients who participate.

The major obstacle in the original bill was how to gain access to the marijuana derivatives. CBD is available in Colorado, which has legalized marijuana for recreational as well as medical uses. But federal law prohibits exporting the oil across state lines.

The revised HB 885 identifies two potential sources. Academic medical centers could apply to the National Institute on Drug Abuse to receive medical marijuana from the University of Mississippi, the only college in the U.S. authorized to grow marijuana for medical research.

The second source would be homegrown Georgia plants. The bill authorizes the state’s academic medical centers to grow the marijuana and process the derivatives for use in their research.

In both cases, whether grown in Georgia or imported from Mississippi, the marijuana derivatives would be stored by the Georgia Drugs and Narcotics Agency, until requested for use by the academic medical centers.

The discussion among the House committee focused on the issues surrounding both the administration of the medical marijuana by academic medical centers and their growing and processing of the therapeutic treatments.

Peake said the FDA would have to approve the research protocols before patients could be treated with CBD or other derivatives, whether the substances came from Mississippi or were grown in Georgia.

The larger issue, however, is whether the academic medical centers are willing to become producers of medical marijuana. In the long run, Peake said, growing the marijuana in Georgia would make it more readily available than relying on the University of Mississippi.

But members of the panel questioned whether the Georgia universities would be at risk of losing federal funding by growing and processing an illegal substance.

No representatives of the four medical centers testified whether their schools would participate.

Twenty other states have medical marijuana laws, allowing for in-state production, manufacture and distribution for treatment of patients on the recommendation of their physicians.

In August 2013, the U.S. Justice Department issued an advisory saying federal prosecutors would not pursue investigations of medical marijuana as long as its use complied with the states’ guidelines.