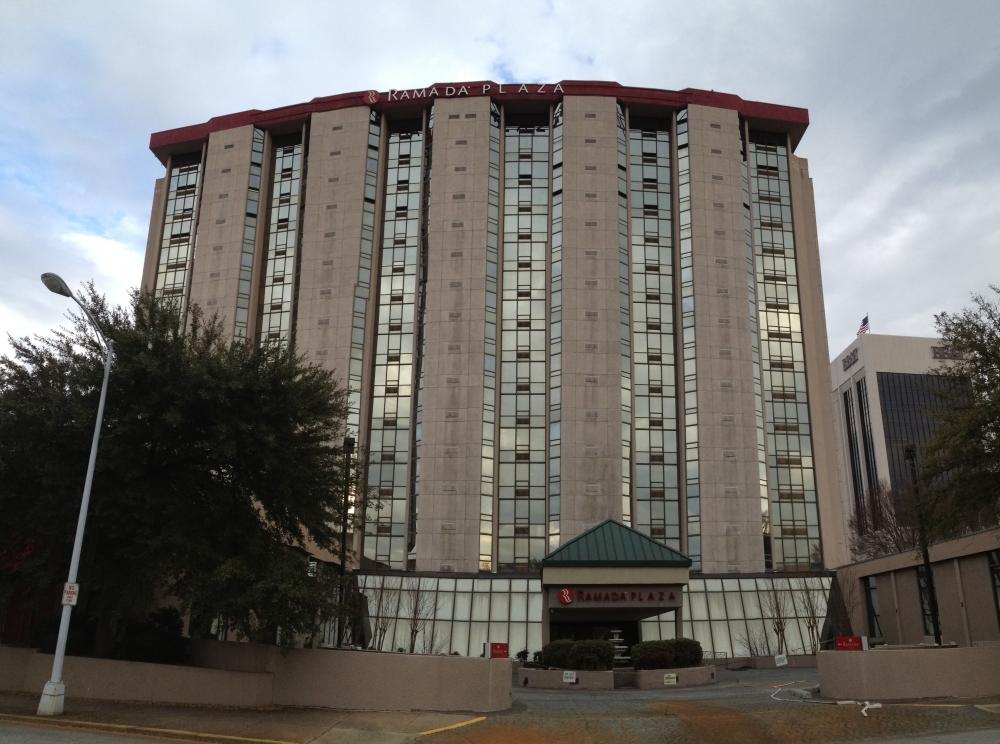 The sale was at least two years in the making, and it almost fell apart several times before the deal was sealed this week.

The purchase means new life is coming to a signature property that opened as a Hilton Hotel in the 1960s, designed by legendary Miami architect Morris Lapidus.

It’s been a vacant eyesore in the heart of downtown since 2011. But the building’s new owner, Rupinder Sangha, sees potential in the property.

“He has done a lot of research around the country on hotels that were good buys, at the right price,” said Blake Lisenby, the Macon attorney who represented Sangha in the transaction.

“He just thinks that the hotel is a wonderful building, and he intends to restore it to everything that it ever was -- and hopefully better,” Lisenby said.

The possibility that a far-away investor might breathe new life into the property first came to light nine months ago. But since then, there have been hiccups.

Then there was the challenge of getting financing, which has been “impossible,” Lisenby said, “to find any lenders willing to lend on a hotel that’s been vacant for some time.”

“So finally, Mr. Sangha has just purchased the property with his own funds,” Lisenby said. Sangha paid $3.1 million cash.

As of now, the street frontage of the 16-story hotel is uninviting, with several signs warning that “trespassers will be prosecuted.” The mirrored windows prevent passers-by from seeing the condition of the lobby inside.

“It looks pretty much like it did when it closed a few years back,” said Alex Morrison, executive director of the Macon-Bibb Urban Development Authority.

In May, the UDA board authorized issuing up to $9 million in bonds to finance the cost of renovating the hotel. Sangha, who would be responsible for paying the money back, has not yet decided whether to accept or go with private financing, Lisenby said.

The hotel needs some replacement fixtures and a new boiler, but most of that money could be spent updating the accommodations to “three- or four-star level,” Morrison said.

Morrison acknowledged, however, that while the hotel is walkable to restaurants and nightlife, the streetscape around the property does not feel particularly urban.

Architect and downtown developer Gene Dunwody Jr. was a young boy when he stayed in the hotel on its grand opening night. His father, Gene Dunwody Sr., was an assistant architect on the original design, which the younger Dunwody said was not scaled to be pedestrian-friendly.

“They just took an entire block and developed this whole hotel on it,” Dunwody said. The building was designed at a point in time when so-called “superblocks” were popular with architects and planners who were trying to reinvent cities for the automobile.

If such a hotel were to be developed downtown today, Dunwody said, “you would change the massing of it to make it have more of a human and pedestrian scale.”

But the redevelopment of the Ramada Plaza presents an opportunity for the whole neighborhood to reverse course, he added.

“You could re-do the front of the building, take that façade and break it up into smaller storefronts, and you could definitely create a whole retail corridor.”

At least at first, Sangha’s ambitions are a little more modest, Lisenby said. He hopes to renovate two-thirds of the rooms by Oct. 1, when the hotel will re-open as a Radisson.