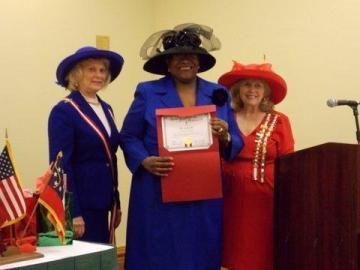 Georgians now can pay extra to have the Confederate flag as their license plate design.

African-American groups condemned the specialty tag when it was announced earlier this month calling it a symbol of racism.

But one member of a Southern heritage group has a unique perspective on the flag issue.

Recently I spent time with Georgia's recently inducted first black member of the United Daughters of the Confederacy.

As a child, Georgia Benton grew up in a segregated Savannah.

And every year, her grandmother took her to see her history.

In trips to a cemetery in South Carolina, she learned about her great-grandfather, George W. Washington, a slave in the Confederate Army.

"She would take us to the grave site," Benton says. "And on that monument, it said that he served in the War Between the States as body servant of Lt. Alex McQueen."

And when the soldier died in the war's last days, the slave carried his master's body back to Sumter.

Blacks also served the South as cooks, laborers and soldiers.

Whites forced them in many cases.

And their numbers were relatively small.

But they're still powerful symbols.

Benton says, she proved her descent from Washington with family and Census records and the monument itself, erected by a white family.

"It's difficult for African-Americans to prove their lineage directly into the Civil War," Benton says.

It's divided into a white north section and a black south section.

Both areas are leafy and well-kept but never far from the roar of a nearby Interstate.

Benton wanted me to see the black section first.

That's where a Confederate emblem marks the final resting place of one of three black Confederates buried here.

"This is Alexander Harris," Benton says. "This is on the south side. And he was a black Confederate. That's where I wanted to start. Now I want to show you something on the north side."

Benton describes the United Daughters of the Confederacy as a history group, a philanthropic society to honor the dead.

She says she decided to join it for a simple reason -- because she can.

But spending a bit more time with her, walking amid the rows and rows of about six-hundred white Confederate grave sites, it's clear that this elegantly dressed and graceful Southerner also has points to make to both whites and blacks.

"The flag itself is not the problem," Benton says. "It's the ignorant individuals who carry it for the wrong reason. This flag is to commemorate and honor men who fought in the War Between the States. It is not to be used for negative connotations such as racism and discrimination."

Benton says that UDC members have welcomed her and that she's not received any negative push-back from the black community.

As for some who view Confederate heritage groups with suspicion, Benton says, they don't know the UDC.

"I am not blind-sighted, okay?" Benton says. "I am over 60 years old. I came up during the Civil Rights Era. And you must realize we can't overlook racism. But we must stand together, those of us who have common sense and know better, stand together and say, 'Hey, let's get rid of this.'"

Like she's done before, Benton says, she'll be in Laurel Grove on Confederate Memorial Day in April to help the Sons of Confederate Veterans decorate graves with Confederate flags.

She says her son is applying for membership in the Sons.

That's the group that gets ten dollars from every Confederate flag design license plate sold by the state of Georgia.