Ethics: The Ghost Of Legislatures Past 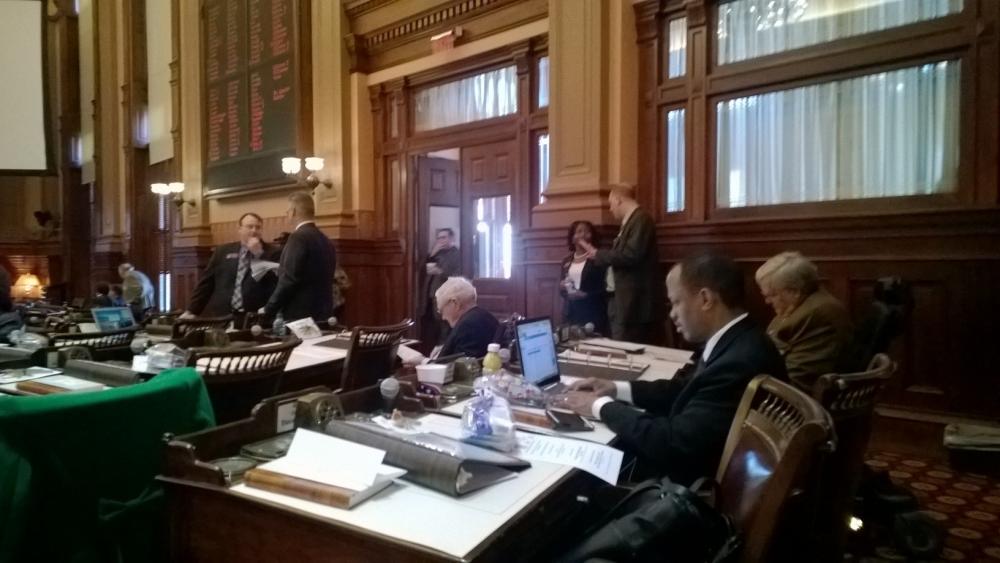 It’s getting crowded at the state Capitol. Now you might be thinking, so what? Well, that’s a sign that we’re getting down to the nitty gritty of the session.

The halls are full of lobbyists, activists and visitors. Two Congressmen even stopped in to call on Thursday. And the flow of bills seems unstoppable. The House alone had a dozen bills on its calendar Thursday.

But like Ebenezer Scrooge confronting the Ghost of Christmas Past, lawmakers this week are also asking questions about a bill they passed last year that caps lobbyist spending. On Tuesday, lawmakers attended a joint Q&A session to straighten out growing confusion about how to abide by the law. And then on Thursday, the House ethics committee met to approve three caucuses that would be exempt from the spending limit (in many cases, it’s not clear what the bill deems a caucus).

Now you might think, once they pass the bill, and the Governor signs it, what more needs to be done?

Well, in the case of this law, a whole lot of interpreting needs to be done apparently.

The bill limits lobbyists’ spending on individual lawmakers to $75 per expenditure. But critics and supporters alike say it contains exceptions that may undermine the intent to rein in lobbyists’ power. One glaring loophole, for example, applies to lawyers. An attorney can merely say he or she is representing a client to avoid reporting expenditures on activities most people would call lobbying.

And that leaves William Perry throwing up his hands in frustration. He’s with Common Cause, one of the groups that had pushed for ethics reform last year.

“There were so many loopholes in this bill that we tried to close last year but it fell on a deaf ear,” he said in an interview at the Capitol Thursday. “Everyone said, ‘We want to see how the legislation works before we go making changes.’ Now that they’ve implemented it, they still can’t figure it out.”

He added, “It’s sad that we’re at this point a year later. The Ethics Commission, which is in charge of interpreting the law, hasn’t even gotten started yet.”

And the commission probably won't issue the rules until this summer -- more than a year after the bill was signed into law.

Many lawmakers share his frustration. Virgil Fludd, a Tyrone Democrat, attended the meeting Tuesday to get more information about how the law works.

“We shouldn’t pass bills that aren’t clear,” he said. “But it’s not the first time it’s happened. When a bill gets passed, you would hope that it has two things: one that it’s constitutional and two, that it’s clear."

Passing Bills In the 'Middle Of The Night'

Often bills are amended at the last minute on a conference committee of legislators from each chamber, and the new version lands on lawmakers’ desks shortly before they have to vote.

Lobbyists’ spending has dropped. But that might be temporary, given special interests’ determination to shape legislation. And the law allows lobbyists to spend whatever they want on groups of lawmakers, just not individual officials. And State Sen. Josh McKoon, a Columbus Republican who sponsored the ethics bill, says that creates confusion.

“We have scored a tremendous victory in taking money out of the day to day process here at Capitol,” he said. “But we’ve created gray areas we have to ask ourselves, ‘Is there activity going on that’s not being reported because of some of this gray that’s been created?’”

And he adds it’s largely because of how the final version of the bill passed, which is to say in a conference committee in the final moments of the 2013 legislative session.

“Had it not been in the conference committee in the middle of the night, with very little notice to the membership, we could have gotten a better bill that would have not created so much confusion,” he said.

And that brings us to his latest initiative.

He tried to propose a rule – not a law, a rule – for Senate procedures and even that failed. It would have mandated a 24-hour review period during which lawmakers could study bills before being asked to vote on them. It failed. But if anyone thinks that’s going to stop Sen. McKoon, he hasn’t been paying attention.

Don’t Know Much About History

McKoon has approached the state Republican Party about putting the question on the primary ballot on May 20. Everyone from Gov. Nathan Deal on down called last year’s bill a good start. Now Republican primary voters may weigh in.

Ok, so maybe it’s just that one bill that lawmakers passed without fixing all of the problems, right? Well, not really. Indeed Capitol observers fear the same thing will happen this year as quickly as bills are moving through legislature in the fast and furious session.

And that’s a concern for watchdog groups like Common Cause.

“It’s what I refer to as governing in the dark,” Perry said. “These bills are hammered out in the dark behind closed doors by a small group of legislators. And then the party caucuses are given marching orders, either ‘We’re fighting this’ or “We’re supporting it’."

A 21st Century Constitutional Convention And What's Coming Up

The House passed a group of bills Thursday related to re-convening a Constitutional Convention. They’re mainly aimed at trying to rein in what conservative lawmakers see as runaway spending in Washington. If a quorum of states were to successfully petition for such a convention, they would attempt to pass a Constitutional amendment limiting the federal government’s spending power.

Some of the legislation will head to Gov. Nathan Deal’s desk for his signature. No word yet if attendees have to wear period dress should enough states follow suit in calling for the first such Convention since 1787 (yes, 1787).

The Senate Education Committee unanimously passed bill that would let Georgia withdraw from the Common Core education curriculum, which has become a target of conservative Georgians. They cite federal government overreach and say it doesn’t give Georgia enough say in educational policy (even though Georgia's Republican leadership joined the coalition of 46 states willingly). Since it passed a committee, it could be headed to the Senate floor anytime.

The House and Senate will convene at 9 a.m. Friday, as part of their normal end-of-week routine of coming in early in the hopes of leaving early for points east, west, north, south for a weekend away from Capitol. That’s sounding pretty good to your GPB News Now correspondent as she writes. TGIF.