Morality And Medicaid Take Center Stage At The Capitol 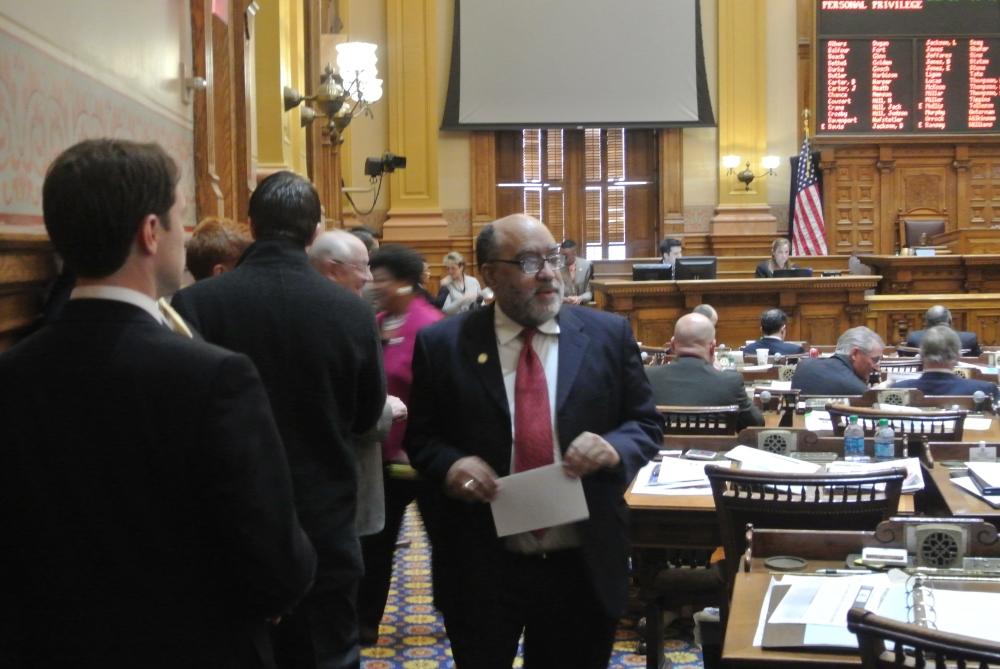 Sen. Vincent Fort hinted that his arrest Monday for occupying Governor Nathan Deal’s office wouldn’t be the last clash in his efforts to convince Georgia’s top official to expand Medicaid.

The Atlanta Democrat has pledged to hold events each week that he’s calling “Moral Mondays.” And in an interview Tuesday, he reiterated his belief that Deal’s decision not to expand Medicaid to the 650,000 Georgians without health insurance is immoral.

“In the Governor’s State of the State speech, he said he was not going to be pushed into doing Medicaid expansion, that he believed for him it was a states’ rights issue,” Fort said in his office in the basement of the state Capitol, sounding a bit weary after his midnight release from Fulton County jail. “That is very ominous language that harkens back to slavery, segregation and intolerance.”

As we’ve noted, Georgia could expand Medicaid under the Affordable Care Act and the federal government would cover all the costs for the first three years. But Deal and others worry that eventually the federal government may change its policy and that would leave Georgia on the hook to pay for all of the new Medicaid recipients.

He says the cost of expanding Medicaid in Georgia would be about $4.5 billion over ten years, and it’s just something the state cannot afford. He’s long said the federal government should give the state block grants to take care of the problem, rather than pay for the additional enrollees.

Your GPB News Now correspondent is thinking long and hard about the phrase Moral Mondays, the name of the weekly protests Fort has planned. It plays on the right-wing group that called itself The Moral Majority, and it’s aimed at questioning where Deal’s moral compass points. As if to make it clear he means business, Fort was one of the ten people arrested for staging a sit-in inside of Deal’s office.

I’ll Take The High Road, You Take The Low Road

Your GPB News Now correspondent is also thinking long and hard about Fort’s insistence that the Governor’s decision not to expand Medicaid is immoral: Them’s fighting words. And I can’t help but balance them against the insistence from every lawmaker and lobbyist under the Gold Dome that this session will be quick. Problems? Sure we’ve got’em. But they’ll have to wait.

I’ve written a bit about the political theater one can find at the Capitol when it’s in session. And I found some when I wandered down to the Governor’s office Monday afternoon.

Outside, a group of protesters were encouraging motorists to honk if they think Deal should expand Medicaid. Inside, Fort tried to present a letter detailing his concerns to Gov. Deal. There were moments of tension during a showdown between him and Gov. Deal’s secretary, whom Fort referred to as “our friend here,” while she furiously punched in text messages to someone higher up, and crisply told Fort that he could leave the letter with her.
For a group that included several preachers and people in wheelchairs, the state trooper presence was heavy. (And they were packing video cameras, in addition to guns).

While reporters stood inside the Governor’s office, with Sen. Fort standing expectantly at the counter, it actually seemed for a moment as if Deal might make an appearance. Even some of his aides seemed to wonder if there might be some awkward meeting, some brief exchange of words in the offing.

And it would be a great deal more than political theater if the two sides could get together to figure out a solution.

Because like a number of issues we’ve talked about in this space – ethics, for example – the Medicaid issue isn’t going away. Nor is Republican opposition to the ACA.

And both sides have some reasonable concerns. Georgia needs to balance the budget each year. And while the federal government would foot most of the bill for the first decade, is it so crazy for Deal to wonder what would happen if all of a sudden the feds changed their minds? Especially since at some point, “the feds” won’t be Pres. Obama and his team any longer.

Both sides also occupy some common ground, according to Deal’s spokesman, Brian Robinson.

In an interview Tuesday night after the snow forced the Governor to declare a state of emergency, Robinson said universal healthcare is everyone’s dream.

“Everyone wants to provide healthcare to all Georgians. We can all agree on that,” he said. “But the man in charge of Georgia has to make sure programs are sustainable. The Medicaid program does not meet that standard. It is not sustainable.”

The state has to make choices. And there are many other “moral” choices that Deal has made by directing spending the way he has, Robinson said.

As for Fort’s complaints about resurrecting states’ rights, Robinson initially said he wouldn’t dignify the comment with a response. But relenting, he said, “It harkens back to federalism. This is how our system works.”

Moral Mondays isn’t a subtle appellation, but it’s pretty astute. That’s because it aims to appeal to Deal’s conscience – something that’s driven the policy positions he’s staked out.

He’s repeatedly choked up in public when talking about his criminal justice initiative, through which he’s sought to help low-level offenders find a path back to society.

“He is so emotionally invested in making that program work, helping people put their lives back together and keeping families whole,” Robinson said.

And perhaps in a reminder that this is an election year, Robinson said that not only is Deal leading on such a moral issue, Democrats are noticing it. Perhaps not in the state Senate (where Fort, and Democratic gubernatorial candidate Jason Carter serve) but Deal wasn’t going after their votes anyway.

How will this end? We’ll all just have to wait and see.