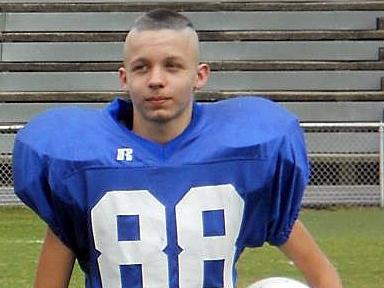 Dakota Dyer was a good student, a starting defensive end on his Bremen, Ga., football team, and had no history of mental illness or drug abuse, his father says.

But in March 2012, Dakota, 14, was repeatedly asked on Facebook to try a “new legal weed,’’ says his father, Lance Dyer.

Dakota finally tried the synthetic marijuana, which medical experts say can lead to paranoia or hallucinations. He then committed suicide.

That tragedy turned Lance Dyer into an activist. On Monday evening, he took his passionate fight against synthetic drugs to a community drug forum, sponsored by state Sen. Renee Unterman (R-Buford), at Gwinnett Technical College in Lawrenceville.

“Ladies and gentlemen, we’re at war,’’ Dyer told the audience. “These are poisons.’’

These synthetic drugs have surfaced in Georgia over the past five years, law enforcement officials say.

Since 2010, the Legislature has passed bills that have tried to combat the problem of synthetic marijuana and “bath salts,’’ another dangerous designer drug.

“Chase’s Law’’ was enacted in 2012 to outlaw all forms of synthetic marijuana. It was named after Chase Burnett, a 16-year-old honor student and soccer player found dead at his parent’s Fayette County home after smoking synthetic pot.

Yet earlier this year, the Brunswick area saw more than 20 people sickened from a “synthetic cannabinoid’’ and commonly referred to as “spice’’ or “herbal incense.’’

The chemists designing these drugs try to be one step ahead of the law’s provisions, devising substances that are not covered under the statute.

“When [synthetic drugs] are tweaked just a little bit, it allows the criminal element to skirt the law,’’ Unterman said. “They really are very, very sophisticated. This is a national issue.’’

Nelly Miles, chemistry section manager for the GBI, told the audience that the synthetic drugs carry dozens of brand names, and are sold in head shops, convenience stores and tobacco shops, as well as over the Internet.

Synthetic pot comes with up to 100 times the potency of THC, the active ingredient in marijuana. Bath salts, which are snorted, injected or swallowed, have similar effects to methamphetamine and cocaine, Miles said.

And the buyer really has no idea about what chemicals are in these products, she said.

“It’s Russian roulette,’’ she said. “You don’t really know what you’re going to get.’’

Lawmakers and drug enforcement agencies are playing “a cat and mouse game’’ with the producers, Miles said.

Georgia has aggressively moved forward with legislation against these substances, she said. “We’ve come a long way from where we started.’’ Miles told GHN that the Brunswick area substance was covered under current Georgia law.

But there are still enforcement gaps because new drugs may pop up at any time, and may not be specifically banned in Georgia. That’s why many criminal cases are difficult to prosecute, Todd Ashley, deputy director of the Prosecuting Attorneys’ Council of Georgia, told GHN.

States may be helped in their prosecutions by adopting laws that seek to define “designer drugs’’ in such a way that can cover new substances, said Gregory Endres, a vice president of Cayman Chemicals. Michigan has created a law that aims to solve this problem, he said.

The Michigan law is a step in the right direction, said Ken Howard, a special agent with the GBI.

“There are bad people out there,’’ Howard said. “It’s very frustrating when we can’t do anything about it.

Dyer, through the Dakota Dyer Foundation, said he has donated a hand-held laser device to the Gwinnett County Police Department that can help identify illegal drugs.

“Our goal is to have one in every county in Georgia,’’ he said.