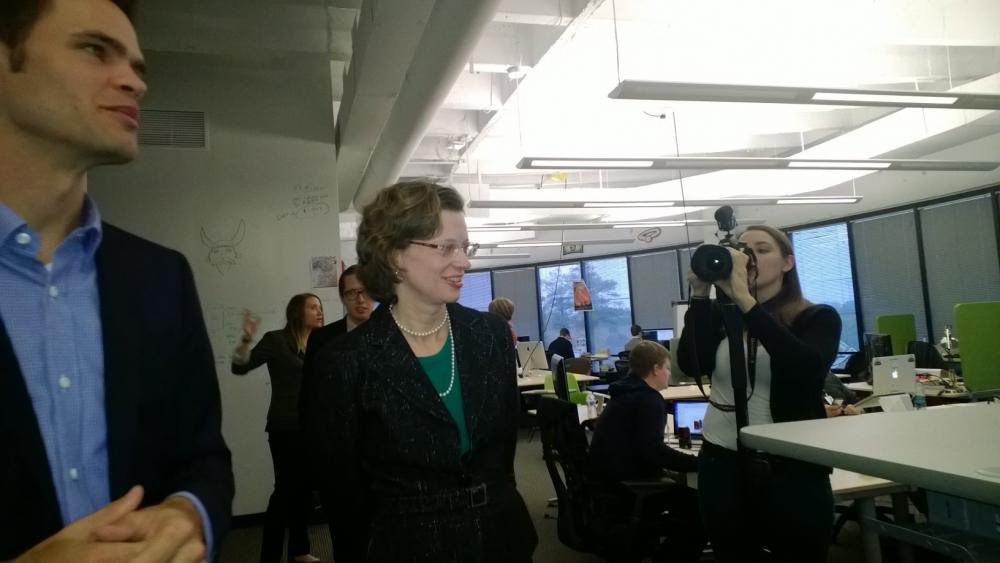 While many Georgians will be out holiday shopping this month, Georgia’s political hopefuls will be hitting the campaign trail. Democratic U.S. Senate candidate Michelle Nunn, for example, visited tech startup firms Tuesday in Atlanta. And while the political newcomer has raised a lot of money, so far she’s offering few specifics about where she stands.

Many Georgia voters may not know much about Nunn beyond her last name. Her father was Democratic Senator Sam Nunn. She, however, has never held political office.

But political observers say it’s OK to put money over message at this stage of her campaign to win the seat Senator Saxby Chambliss is vacating.

Lowell Greenbaum, head of the Richmond County Democrats, says she’s got her name and that will do for now.

“It’s enough to get money. That’s the point,” he said. “She will collect a lot of money because of the name.”

“Fortunately or unfortunately, the way that candidates show they can win is by raising a lot of money,” he said. “It proves viability.”

Both Greenbaum and Schapiro say Nunn needs to go around the state to familiarize herself with the issues and introduce herself.

“What she has to do is define herself and I think that will come in time,” Schapiro said. “She hasn’t run before, and so I think she’s going to be carefully weighing the issues and weighing the nuances of issues.”

Visiting with potential voters at Atlanta Tech Village Tuesday, Nunn said little beyond wanting to go to Washington and roll up her sleeves.

“The issues and the values that I want to carry forward include collaboration, getting things done, solving problems,” she told reporters. “And I think people have had enough of the negativity and the partisanship, and I think what they’re looking for are positive messages of hope and inspiration and idealism.”

Focus? Stay Above Partisan Bickering
When pressed on her Democratic credentials and the fallout from Obamacare, she seemed to evoke a third space where parties don’t matter.

“I think we need to take a broader lens to this and get it out of the political bickering and take it into problem solving that’s real and pragmatic and focused on the lives of real people,” she said about the rollout of the Affordable Care Act websites.

What that means, remains to be seen. It’s also unclear what policy positions she’ll stake out after her Georgia Entrepreneurship Tour, which will include a stop Thursday in Macon.

At Atlanta Tech Village, she met with owner David Cummings who showed off his co-working space, the home of about 100 innovative firms that rent office space.

Nunn said she visited the incubator as part of a tour of the state to see what Georgia’s doing right. And she said, that means having a trained workforce and investing in technical college education – items at least partially under the control of the state legislature, not the U.S. Senate [A spokesman for Nunn notes the federal government spent $138 billion on education in 2013, including workforce training and technical college funding].

Visiting Businesses And Hopefully Voters
In an interview afterward, Cummings said he’s always eager to talk to elected officials to stress how many jobs new companies create. He also said he hopes people like Nunn can help remove bureaucratic hurdles. For example: streamlining the process of obtaining a business license in Atlanta.

“You think, ok, I’ll get my drivers’ license and my credit card and go online,” he said. “Oh no. The City of Atlanta requires you get a money order from your local post office and go down to City Hall and wait in line for a business license. So you’ve just killed four to six hours for no good reason for something that should be online.”

That’s likely not an issue Nunn can help much with, if she wins the Senate race. But if asked about it, it’s likely she would she’d say she’s a pragmatist, and a problem-solver and someone who’s above the partisan bickering.