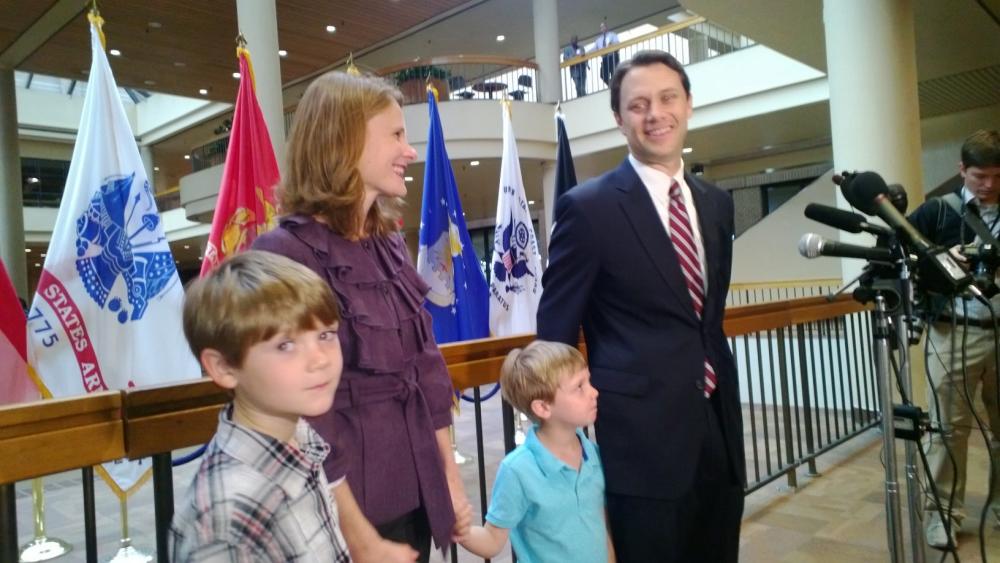 A grandson of former President Jimmy Carter has announced he will run for Governor of Georgia. Jason Carter, a Democratic state Senator from Decatur, near Atlanta, filed paperwork Thursday to become Gov. Nathan Deal's highest profile challenger. He seeks to unseat Deal at a time when Democrats hold no statewide offices in Georgia.

Carter has been challenging Gov. Deal for the past three years over an issue that’s likely to define the election: education. And now he’s using the issue as the bedrock upon which he’s based a statewide run.

He says Georgia schools are ailing because Deal and the state’s Republican leadership have slashed $1 billion from education funding.

“The excuse we’ve been hearing for many years is we can’t solve problems and be fiscally conservative,” he said in a sit-down interview at his office in midtown Atlanta. “I reject that. I believe we can have a small and effective government. We’ve lost track of the effective part.”

When asked if he can win, after a political career that's spanned three years, he says, “Absolutely.”

And he adds, “The Governor is not doing enough to solve our problems with respect to education and the economy. And if you’re not solving the most important issues in front of us, it’s hard to get re-elected.”

Gov. Deal is facing challenges on several fronts. Ethics allegations continue to dog him and he faces a primary challenge from Georgia’s state schools superintendent, John Barge. Deal and Barge have argued over the Common Core high school curriculum used by 46 states that some Republicans now paint as a heavy-handed federal program.

Deal’s spokesman Brian Robinson said the contrast between what Carter would do and the Governor’s fiscally-conservative record is stark.

“Do you want higher taxes? Or do you want to keep them low? Do you want to take away the merit-based HOPE scholarship and make it needs-based regardless of the performance of the student? Do you want to expand Medicaid?” he said in an interview at his office at the state Capitol.

Robinson also said GOP primary voters will give Deal a strong mandate. And he pointed to Deal’s partnership with Atlanta Mayor Kasim Reed, a Democrat, as proof of his bipartisan support.

Carter and Deal have disagreed about how to shore up the HOPE college scholarship, which is funded by the state lottery. Carter says it should be needs-based because many current recipients have the means to pay college on their own.

Carter was first elected to the state Senate in 2010. Experts say demographic changes occurring this decade in Georgia will favor Democrats. Districts that elected Republicans in 2012 may elect Democrats by 2020.

Political scientists have been speculating about whether Atlanta Mayor Reed would seek the Governor’s office. But speculation has revolved around 2018, not 2014, in part because Reed will have completed his two terms as Mayor.

Reed has vehemently denied higher aspirations, but others say it’s a question of when, not if.

In an interview in September, Andra Gillespie, an Emory University political science professor, says he could seek higher office, or snag an appointment such as a cabinet position.

“I think he’s always going to have some role,” she said in an interview. “Whether he plays the elder statesman or whether he goes onto another office, I doubt that mayor is the last we’re going to hear of Kasim Reed.”

And she says Reed could exit politics and then run again when Georgia Democrats have a better shot at winning statewide races.

Carter’s announcement effectively upends speculation about Reed. If Carter loses next year, it’s unclear if he would then battle Reed or another Democrat for the nomination in 2018.

“It’s always a gamble to run for statewide office and lose,” said Tom Crawford, who publishes The Georgia Report. “But if you run the right kind of campaign and you stay competitive and you keep things on a relatively high road, it can work to your advantage if you decide to come back two or four years later.”

Carter is one of two Georgia Democrats with famous names seeking statewide office. Michelle Nunn, the daughter of former Democratic senator Sam Nunn, is seeking to win the seat U.S. Senator Saxby Chambliss will be vacating. Both are betting dissatisfaction with Republicans and changing voting patterns will help turn the tide on what's been considered a solidly red state.