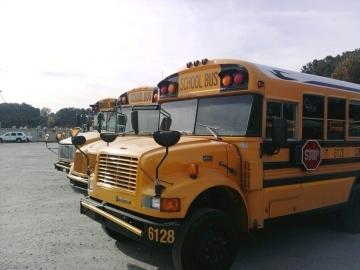 A west Georgia school board member is looking into whether to put ads on school buses to raise money. Muscogee County lost $24 million in state funding this year due to budget cuts. The school bus ads would be a first for Georgia.

Muscogee County school board member Mark Cantrell says it is an idea worth considering. He’s looking into whether putting ads on buses is a good way to bring in more money for education. Cantrell says ads are nothing new to schools. “We’ve been doing advertising as far as at baseball fields and football fields and school annuals and Partners in Education for as long as you can imagine schools out there.” he says.

Dorie Nolt, a spokeswoman for the state Department of Education, says the department doesn’t prohibit advertising on school buses, but it strongly discourages it on safety concerns. “We believe that advertising on the outside of school buses distracts drivers. And drivers, when they are approaching a school bus, we want them to be as careful and vigilant as possible.” she says.

Nolt says for the past four years Georgia has led the nation in the number of children killed by motorists while getting on or off a school bus. “Since 1995, 13 Georgia students have died, struck by motorists at the school bus stop.” She says that does not include incidents where a school bus hit a child.

According to the National Conference of State Legislatures, 10 states currently allow advertising on the exterior of school buses. Arizona, Colorado, Minnesota, New Jersey, Nevada, Texas and Utah allow ads on the outside of school buses.

Cantrell says he's looked back to 1993 and he hasn’t found any evidence that school bus ads have led to an accident.

Nolt says placing ads on school buses remains a local school district decision. There are no laws in place in Georgia governing the decision.

Cantrell says he posted the idea on his Facebook page, and in about 8 hours he had 300 to 400 responses. He says about 52 percent opposed the idea based on safety concerns. He says 48 percent favored the idea as a good way to get more money for education. He says he will continue to study it before bringing a proposal to the school board. He says he wants to make sure that it wouldn't put any students in harms way.