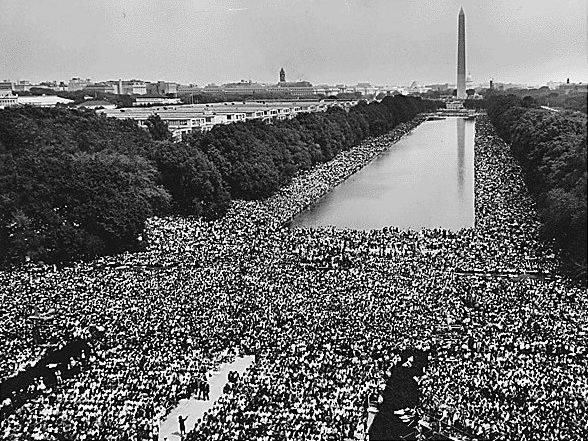 When it came to covering the March on Washington 50 years ago, black and white media organizations took different approaches. Major television networks devoted hours of live airtime to the event. And the impact of media coverage would change the nation’s understanding of the civil rights movement.

“If you are from the South and all of the coverage has been this drumbeat that the march cannot be a success, that they cannot pull it off, that it’ll turn violent, the true representation of it was quite the opposite,” says Hank Klibanoff, the author of a Pulitzer Prize-winning book on news coverage of the civil rights era and a former managing editor at the Atlanta Journal-Constitution.

“It took the mystery out of the [civil rights] movement because it showed this quarter of a million people marching peacefully, marching happily, marching with determination,” he said.

That was reflected on the radio, where broadcasters like the Mutual Broadcasting System had more than 400 staffers and journalists working on coverage.

And for much of the country, that was also reflected in newspaper coverage, which largely came via wire services like United Press International and the Associated Press, Klibanoff said.

Larger newspapers, like the Atlanta Journal and the Atlanta Constitution, sent their own reporters to augment wire-service coverage, and their editors also weighed in.

“There, people brought whatever perspective they had coming into it,” Klibanoff said. “Right in the heat of it, you do not find too many editors suddenly saying, ‘Ah ha! I’ve changed my mind on this basis. But I think what really became unmistakable was that this juggernaut was not going to be stopped.”

Klibanoff said journalists today could well learn from the coverage of the march 50 years ago. For instance, they should pay attention to what other media outlets are covering.

“If, back then, more white people had been reading the black press, none of this would have been a surprise. But they weren’t,” he said. “Today, I don’t know that we in America who are white, mainstream and pick all your other descriptors are paying much attention to what’s going on in the ethnic media.

“The voices of this diverse nation are evident in their own media. That somehow doesn’t cross over.”