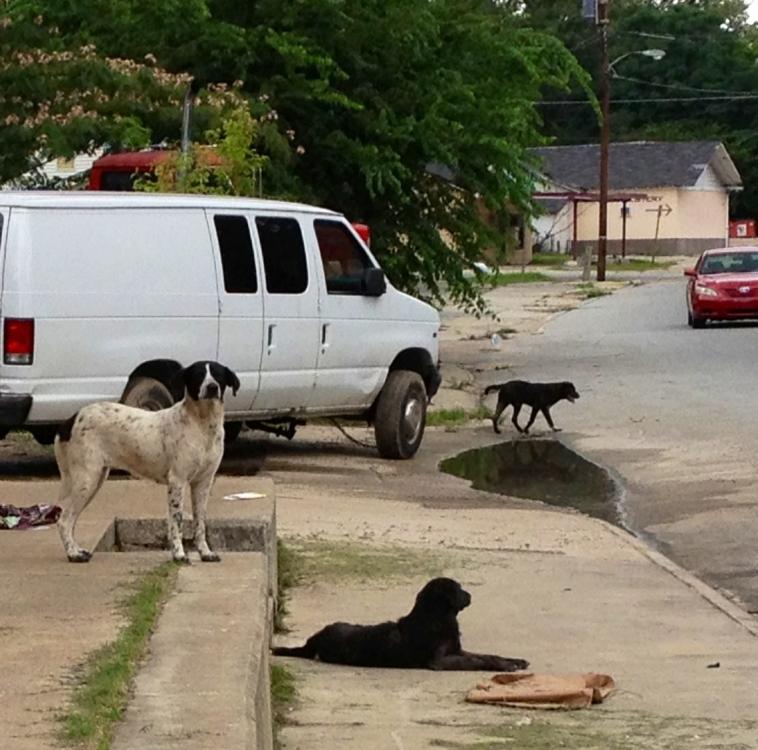 Bibb County Animal Welfare has a goal: help pet owners spay and neuter 550 dogs by the end of September. They have money to do it — a $50,000 dollar grant from PetSmart Charities. Pet owners don’t have to pay a thing.

But since the program began last October, only about 70 dogs have been fixed. Understanding why means understanding that money isn’t the only barrier to getting pets spayed or neutered.

'Too many irresponsible pet owners'

Dirty, scruffy stray dogs wander around all over Macon. You’ve probably seen one traipsing along the side of the road and wondered what to do. Do you bring it home? To the shelter? Or do you figure it’ll have better chances on the streets?

"The number of [...] stray animals that come into our shelter everyday is too many," said Bibb County Director of Animal Welfare Sarah Tenon. "It’s too many because we have too many irresponsible pet owners" — owners who don’t get their pets spayed or neutered.

The PetSmart grant is focused on fixing dogs within the 31201 zip code downtown, which was the area that Animal Welfare determined has the greatest need.

Owners can get a voucher from Animal Welfare and take it to one of four participating vets around town. It sounds easy and effective enough, but the program hasn't worked out as planned.

"I had read about [the free spay-neuter program] on the Animal Welfare site and I noticed that my neighbors in this zip code didn’t know anything about it," said Samantha Bergeron, a full time student at Mercer University with two dogs of her own.

On her weekends, Bergeron is going door-to-door spreading the word to her neighbors — you can get your dog fixed for free.

"Okay, today we’re going to go down past Washington Park, around by the Mercer Law School and back up Spring Street and around back here to the library," Bergeron plotted on a recent Sunday, map-in-hand.

Walking up the steps to an old blue house, she crossed the small creaky porch and knocked.

"I’m not very much of a talker," she confessed as she waited for someone to answer. "The idea of going up and invading people’s homes is a little unnerving to me."

An older man came to the door and didn't show much interest in what she had to say.

Bergeron notices a big difference in mindsets among pet owners in Macon. Some think getting their pets fixed is a given. But a lot of people who come from farm families in the country are used to letting their dogs wander around freely, sometimes even without shots or medications, she said.

"There’s a big cultural issue," she said with a sigh. "A lot of people think, 'oh I have this dog, I’m going to breed this dog and I’m going to get money for it.' What they don’t realize is that the cost of a litter overwhelms the costs that they’ll make."

Even if Bergeron bridges the cultural divide and gets vouchers in the hands of dog owners, they still need to make it to the vet. Without a car, that can be a problem; pets aren’t allowed on Macon Transportation Authority buses.

Some volunteers have offered to drive people to the vet, but again, it’s a matter of them knowing about it.

'I should be the animal shelter unofficially'

Finally, after a day of striking out, Bergeron got a receptive audience.

"I'm so glad to hear about this," said Toni Terry, a big-smiling woman on Orange Street. "I think that now that people know there is something free, that they would definitely take advantage of it."

Terry doesn’t have any pets of her own, but still does her part to help stray animals in her neighborhood. "Actually, I should be the animal shelter unofficially because I feed and help all the pets that come around the house," she said with a chuckle.

If Bergeron is successful, that won’t be as big of a job in years to come.

Free spaying and neutering services for dogs will be available until September 30 through the PetSmart grant. If no one comes to your door and offers you a voucher, anybody who lives in the 31201 zip code can pick one up at the Bibb County Animal Shelter on 11th Street.