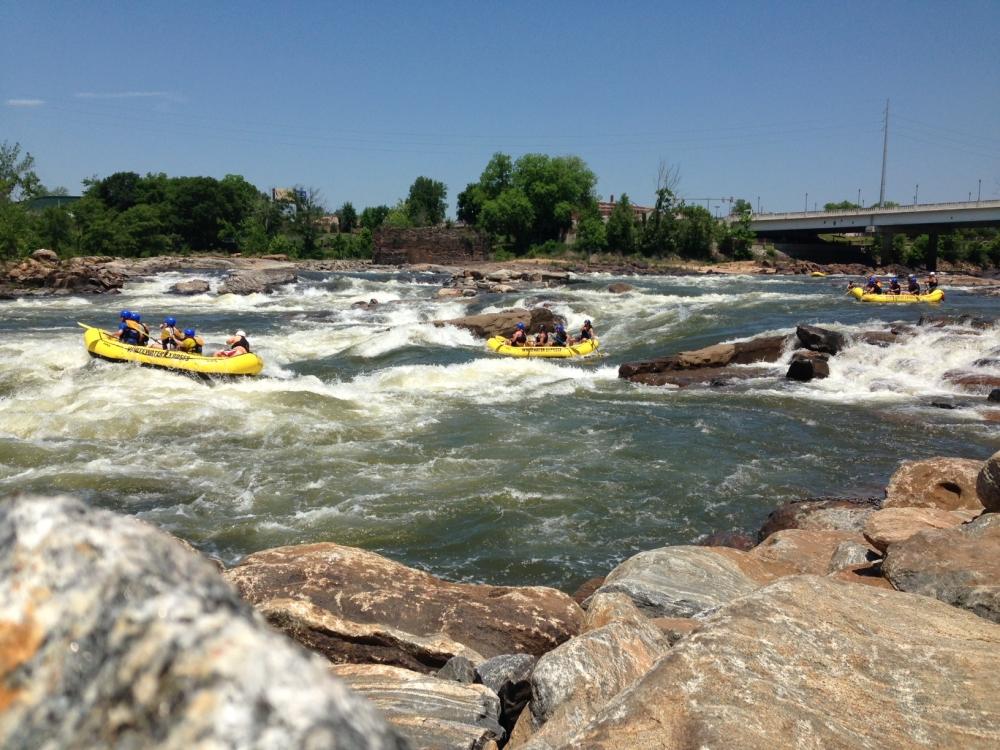 Whitewater Columbus, a 2.5 mile urban rafting course on the Chattahoochee River, officially opens to the public on Saturday.

The course has been in the works for about 15 years. The nearly $25 million project removed two historic dams from the water to restore the flow of the river.

John Turner, Chairman of the Chattahoochee River Restoration Committee, said restoration was the initial idea behind the plan.

“It wasn’t truly a river but it also wasn’t truly a lake,” said Turner. “It was like two steep-sided bathtubs as it flowed through town. So the diversity of the habitat just did not exist. So in taking the dams out, we’ve restored the characteristics of a free-flowing river and the results have been instantaneous.”

Because of the environmental impacts, the National Oceanic and Atmospheric Administration awarded the project a $600,000 grant through its Open Rivers Initiative.

"The removal of Eagle-Phenix and City Mills Dams is an important step towards the recovery of important migratory fish of the Apalachicola, Chattahoochee, Flint (ACF) system,” explained Howard Schnabolk, Marine Restoration Specialist for NOAA in an email. “Elimination of the impoundments caused by the dams will expose the bedrock, boulders, cobble and gravel that serve as optimal spawning habitats for migratory fishes, such as Alabama Shad."

Turner said the environmental benefits have already been apparent through the return of several species of birds.

The economic benefits of the project are expected to take time, but Turner and Columbus Mayor Teresa Tomlinson believe they will be worth the wait. The project is expected to create 700 jobs and have an economic impact of $42 million per year.

"Certainly after the first year we'll have some indication as to where we are,” said Tomlinson. “Whether we'll meet those the first year, I doubt it. Those are certainly kind of averages and long term, but if we're making good progress towards those goals, I think we can say it's successful and two, three years out we'll know if we're meeting them."

Dan Gilbert is President of Whitewater Express, the lone outfitter and guide company for the project. He said he has already successfully operated on rivers in North Georgia and believes the Chattahoochee will have the same draw.

"The other rivers, we've got 32 years of history on those other rivers and Nantahala and Ocoee are not a fad,” Gilbert said. “Last year, 230,000 people went down the Ocoee River--same number that's gone down the Ocoee River year after year for 15 years and so, there are people who do this as a sport or an activity and love it and look forward to every year when they come out. I think that's going to be true down here as well."

Some questioned the potential of Whitewater Columbus after a high-profile outfitter, Nantahala Outdoor Center, pulled out of the project just weeks before the opening. Mayor Tomlinson, however, said that may have been a good thing.

"I think the fact that we have an outfitter that loves it, thinks this is the greatest thing that's ever happened, is all in, is something that's going to work out for our benefit,” Tomlinson remarked. “I think it's better to have an outfitter that loves the project as opposed to somebody that it was an afterthought because of their business plan."

Whitewater Express generally offers guided trips from 11:30 a.m. to 5:30 p.m. High-flow tickets are $48.50 per person and low-flow tickets are $32.50. Gilbert suggests setting aside three hours for the trip from start to finish.

Those with their own equipment can use the river course for free.