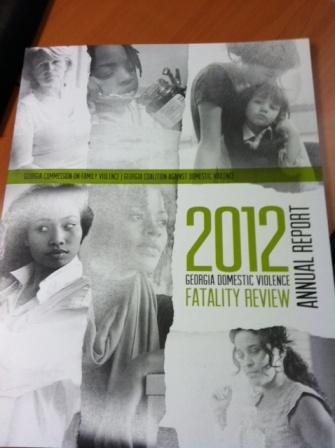 The number of domestic violence homicides in Georgia appears to be rising according to a report released this week. 128 people died in domestic-related homicides in 2012. The Georgia Commission on Family Violence and the Georgia Coalition Against Domestic Violence have been studying the fatality rate for 9 years.

“In 76 percent of the domestic violence homicides, they were firearms-related deaths. We also found that in 43 percent of our cases reviewed, the victim and the perpetrator of that homicide shared a minor child together. And that in 18 percent of those cases, the children actually witnessed those homicides.”she says.

Jenny Aszman, project coordinator, says they are asking that a state-wide tracking system be set up to follow domestic violence homicides.

She says “Our numbers have actually increased from 2011 to 2012. But unfortunately there’s no statewide collection of this data beyond what we do at the project. We actually monitor news reports to find fatalities in Georgia for domestic violence. So it may be that there’s more, or it may be that they just happen to be reported in the news that year.”

Thomas says “The GBI does track homicides here in the state. Georgia has 159 counties and all the counties like to do things differently. So developing a uniform tracking system will help us to identify more accurately where do we need to focus our efforts. What are the efforts we need to be focusing on.”

Over the past ten years, the project has recorded over 1200 deaths in the state due to domestic violence.
Georgia is ranked tenth in the nation for men killing women in single-victim homicides.