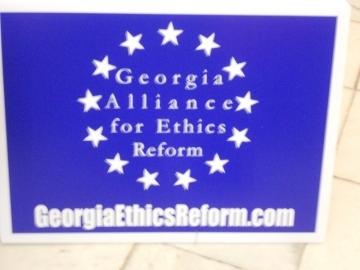 One of Georgia’s most powerful lawmakers proposed Tuesday a total ban on gifts from lobbyists to elected officials. The move represents a turnaround for House Speaker David Ralston, and watchdog groups say it could finally begin a frank discussion about ethics in Georgia.

The legislative package would aim to ban not only monetary gifts but also tickets to sporting events such as Falcons games.

It would also bolster the state ethics commission’s authority.

Ralston, a Blue Ridge Republican, rejected the idea that he felt pressure following a European trip a lobbyist gave him.

“I think that gave a quantifiable way to gauge the public feeling and certainly it made an impression not only myself but other leaders in this General Assembly,” he said.

Ethics reform backers say the bill is a step in the right direction. State Senator Joshua McKoon, who has been pushing a gift cap for two years, said the move tells him ethics reform is no longer a fringe issue.

But McKoon, a Columbus Republican, said the two bills contain loopholes that could undermine the gift ban. He favors a $100 gift cap. He said a total ban could drive lobbyists’ gifts underground.

“I’m very concerned about that," he said in an interview at the state Capitol. "If you look at the states that have adopted a total ban, you have states like Florida that have used campaign finance laws to get around the ban.

Ralston acknowledged there’s always a risk that lobbyists will find a way to sidestep a gift ban.

The bills would expand the lobbyists’ gifts’ to all elected officials, not just legislators, and would require more people to register as lobbyists.

Ralston held a midday press conference to announce the bills, and watchdog groups initially praised the proposed legislation as historic. But upon closer examination, they said measures include exceptions that would bring about little change to the status quo.

William Perry of Common Cause Georgia said the key is the exclusion of gifts of food and beverage at events that are open to all members of the House or Senate or a committee or a subcommittee.

“Any committee chairman could just appoint a subcommittee of one,” said Perry, whose group is part of the Georgia Ethics Alliance. “And it doesn’t say that all members have to attend – just that they have to be invited.”

He also said the bills would probably not have prevented Ralston's European vacation, which cost $17,000.

McKoon, however, stressed that he’s not in a rush and the bills will usher in a period of spirited debate over ethics legislation in Georgia.